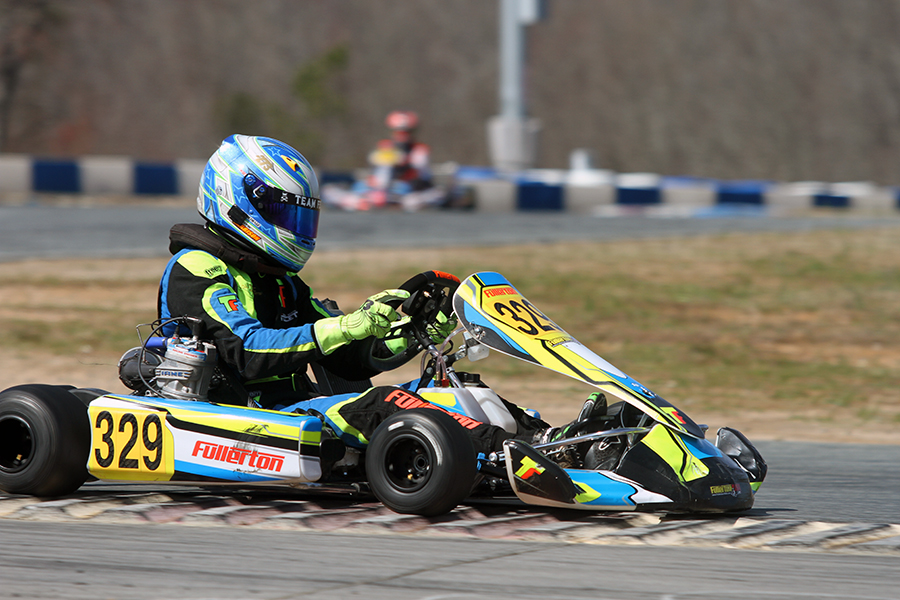 The second event of the 2018 WKA Manufacturers Cup Series went into the books on Sunday following a challenging weekend at the GoPro Motorplex. The Mooresville, North Carolina facility was hit with cold weather and rainy conditions, putting the drivers and wrenches on edge throughout the weekend. Saturday ended with drivers negotating the wet course, while Sunday started out with some gambles as the conditions improved to bring on dry tires for the Prefinal and Final. Some attempted to make the move to the slick Bridgestone tires in qualifying. The gamble did not pay off, as key drivers found themselves toward the tail of the field when gridding up for the Prefinal races. The sun came out for the second half of the day, and while the cold temps and strong winds remained, the track surface provided racers the ability to go 100% in dry setups.

The two Senior categories were won by Fullerton. Austin Garrison, a podium finisher in Daytona and Saturday at GoPro, was able to put himself on the top step Sunday while GoPro regular Blake Hunt defended his home turf with a second straight victory to back up his triumph the day before.

Saturday winner Brandon Jarsocrak (Kart Republic) picked up where he left off on Sunday, navigating his machine to the pole position in the drying, but still damp course on wet tires. No driver who gambled with dry tires were able to put themselves within the top-15. With the track dry, drivers had to ‘guess’ at what the best setup would be for the Prefinal. Austin McCusker (Kosmic) came out the winner, starting the main event on the pole position with Ryan Raffa (Tony Kart) alongside him. Jarsocrak dropped to fifth by the checkered flag. Raffa was able to get the jump on McCusker at the drop of the green, as the pole sitter was dropped down to fifth. Jarsocrak put himself into the second spot and looked to be buying his time to set up Raffa. Garrison had other ideas, coming on strong in the second half of the race. Once past Jarsocrak, he went after Raffa quickly to assume the lead. Garrison never put a wheel wrong, going on to earn his first WKA victory of the 2018 season. The closing laps was about Ashley Rogero (FA Kart). The former WKA champion was among the brave drivers to try dry tires in qualifying, ending up 20th. Working up to seventh in the Prefinal, she also came on late in the Final to steal second spot from Raffa. Jarsocrak settled for fourth, with McCusker placing fifth. Blake Hunt (Fullerton) ended up in the wall during qualifying, and charged his way through the field in the Prefinal and Final to end up sixth at the final checkered flag. 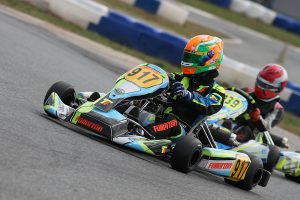 Hunt had a strong weekend, placing 10th on Saturday in IAME Senior, while adding two wins in the KA100 division. Hunt set fast time in the wet for qualifying, only to loss by 57 thousandths in the Prefinal to Daytona double winner Colin Neal (Kosmic). Luke Stroud (Top Kart) got the jump on both to lead the first half of the Prefinal until Neal put himself at the point, scoring the win. Neal struggled once again at the start, dropping to third and continued to fall down the order as the race went on, eventually finishing seventh. Hunt took advantage, taking over the lead and going wire-to-wire for the victory to put himself into the title chase. Taylor Stanford (CompKart) trailed him the entire 20 laps to earn the runner-up spot and fast lap honors. Emory Lyda (Merlin) completed the podium with Brad Brittin (Merlin) fourth and Chase Carey (Tony Kart) in fifth.

The day belonged to Luca Mars in the IAME Junior class. Mars (FA Kart) qualified second behind Josh Green (Kosmic) in the wet session, and remained on Green’s bumper in the Prefinal until the final lap. Mars slipped by to steal the win and the pole position for the main event. A great jump and fighting behind him at the start of the main event allowed Mars to get away, running unchallenged to a five-second victory, his first of 2018. Green was under heavy pressure from a number of drivers, slipping back to 10th in the order by the checkered flag. Kaden Wharff (Top Kart) bounced back from a DNF on Saturday to score the runner-up spot ahead of Connor Ferris (Top Kart), who recorded fast lap of the race. Matthew Duncovich (Kart Republic) was fourth, up from 11th on the grid while Caleb Bacon (Tony Kart) fought back from 26th on the grid for the Prefinal to end up fifth at the end of the day.

The Yamaha Junior field was mixed when lining up for qualifying with about half on wet tires, and the other half on dry. Only one driver – Ian Quinn (Tony Kart) – could get the dry tires to work and ended up second in the session, half a second behind Tyler Ferris (Top Kart). Ferris led all 11 laps of the Prefinal for the win with Donald Whorton II (FA Kart) right there, while Kaden Wharff (Top Kart) stormed through the field to end up third his gamble with dry tires in qualifying did not pay off. The Daytona winner was quick to attack in the Final, working past both Whorton and Ferris for the lead in the opening lap. Ferris put the pressure on early, and it seemed to work with Wharff dipping his right side tires into the standing water inside turn four, causing him to spin. This allowed Ferris and the rest of the leaders to get away. Wharff never gave up, working up to the fourth position. Ferris took the lead but was not challenged by Whorton. DW2 took the lead on lap 13, and was able to hold off Ferris at the line by 16 thousandths of a second. Quinn retired early with a broken chain, helping to give Andrew Patterson (Tony Kart) a podium finish in third. Wharff and Garrett Davis (FA Kart) completed the top-five. 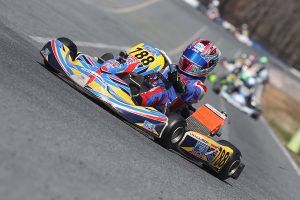 Brent Crews (Nitro Kart) added his second victory of the WKA season in the Mini Swift category. Crews qualified fifth but put himself on the pole position for the main event with the win in the Prefinal. At the drop of the green, Crews was able to slip away from the rest of the field, going on unchallenged to the checkered flag for a nine-second advantage after 20 laps. The fight for second went down to the wire with fellow Daytona winner Mateo Rubio-Luengo (Benik) ahead of Raiden Nicol (Tony Kart) at the line. Sebastian Ng was fourth with Frankie Iadevaia putting three Nitro Kart drivers inside the top-five.

Ben Maier was the only driver to recover from the dry tires on a slick track in qualifying to take the checkered flag at the end of the day. Maier (Nitro Kart) started the Prefinal in the 15th position, working himself up to seventh with fast laps of the race. Top qualifier Cameron Myers (Margay) fought off Danny Dyszelski (Parolin) for the win in the Prefinal. They battled early in the main event, with contact putting Myers into the barriers with Dyszelski outside the top-five. This allowed Maier to slip past for the lead, going on to take his fourth straight Final victory of the season. Adam Brickley finished second while the fight for third went down to the wire. Hoyt Mohr (Tony Kart) was able to edge out Spencer Conrad and Miles Murray in a three-wide finish. Mohr however lost his airbox during the race and was removed from the results. That promoted Conrad to third, making it an all Nitro Kart podium, Miles Murray adding a fourth Nitro Kart. Dyszelski was then classified fifth in the final order.

The Yamaha Sportsman victory came down to a photo finish. Thomas Schrage (PCR) was the top driver during the first half of the day, posting fast time in qualifying and winning the Prefinal. He would be shuffled back at the start with Danny Dyszelski (Parolin) and Paige Crawford (Benik) hooking up to slip past Schrage. The two stayed locked together, waiting for the final lap to fight it out for the win. The two came to the checkered flag side by side, with Dyszelski reaching the line first by 89 thousandths of a second. Ironically, they recorded the same fast lap of the race on the same lap. Schrage settled for third over Annie Rhule (Energy) with Miles Murray (Nitro Kart) fifth. 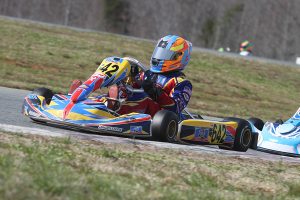 The local option Briggs 206 Cadet class was another class that went down to the wire. Bree Miller (Top Kart) stepped up the pace on Sunday, setting fast time in qualifying and was able to win the Prefinal. She and Saturday winner Sam Corry (Tony Kart) locked up and got away from the field, settling the victory in a duel. Down to the line, Corry was able to edge out Miller by 89 thousandths of a second. Ben Maier (Nitro Kart) bounced back from his hard wreck at the end of Saturday’s Final to end up third over James Overbeck (Nitro Kart) and Sebastian Ng (Nitro Kart).

The 2018 WKA Manufacturers Cup Series resumes on May 18-20 at the Pittsburgh International Race Complex in Wampum, Pennsylvania. Full EKN Trackside Live coverage will continue throughout the weekend.