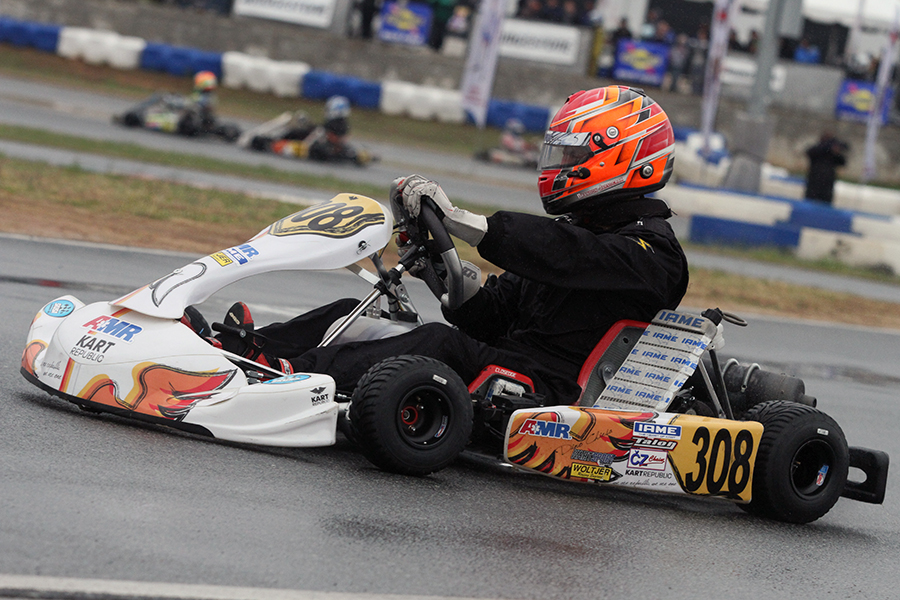 The opening day of racing at the GoPro Motorplex for the second event of the 2018 WKA Manufacturers Cup Series was a battle all day long. The weather is much colder than normal, and rain settled in at the Mooresville, North Carolina facility for much of the day to keep things interesting for the third round of the championship chase. The rain hit mid-way through the opening heat races and stayed wet for the remainder of the day. This tested the competitors, teams, and staff to battle through the two rounds of heat races and the main events to decide the winners on the day.

Entering the weekend as one of the favorites, Brandon Jarsocrak defended the home turf for the KartSport North America operation by winning the IAME Senior feature. Jarsocrak (Kart Republic) was able to get away in the opening lap, establishing a solid lead over the first few laps to go wire-to-wire for the victory. Heat #1 winner Austin McCusker (Kosmic) put himself into the second spot, unable to close up to Jarsocrak over the 15-lap run. Austin Garrison (Fullerton) posted the fast laps of the race driving from 15th on the grid to end up on the podium in third. Ryan Raffa (Kosmic) was fourth with Jacob Donald putting a second KSNA / Kart Republic entry into the top-five. 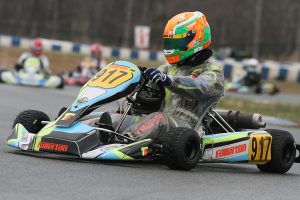 Blake Hunt was able to earn his first WKA Manufacturers Cup Series victory to his credit on Saturday. Hunt put his Fullerton entry to the front of the KA100 field with a win in Heat #2, starting on the pole position and never looking back. Hunt led all 14 laps to defend his own track and stand on the podium in P1. Double Daytona winner Colin Neal (Kosmic) had fast lap of the race, unable to close in on Hunt. Stanford Taylor (Top Kart) was able to slot into the third spot over Byron Daley (Fullerton) and Luke Stroud (CompKart).

It was a toss-up in the IAME Junior category with a number of drivers showing the pace to battle for the overall win. Josh Green (Kosmic) was a surprise front runner, securing the fast time in qualifying and the pole position for the main event over heat race winners Pauly Massimino (Kart Republic) and Luca Mars (FA Kart). Massimino put himself into the lead early with Green slipping back to second and Tyler Ferris (Top Kart) jumping up from sixth to second. Massimino led until lap six when he made hard contact with a barrier marking the outside line for turn six. This gave Ferris the opportunity to slip past for the lead. From there, he pulled out to a five-second advantage for his first victory of the season. Massimino, despite bending up the front end geometry, held on for second with Mars in third, posting fast laps of the race. Hayden Jones (Tony Kart) was fourth with Green back to fifth. 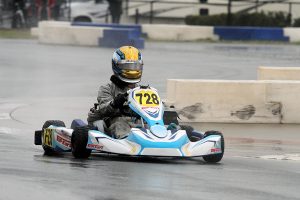 Tyler Ferris ran away with the victory in IAME Junior (Photo: EKN)

Kaden Wharff walked away throughout the day in the Yamaha Junior category for his second victory of the season. Wharff swept the day, earning the Final victory by over two seconds ahead of fellow Top Kart driver Tyler Ferris. Donald Whorton II (FA Kart) won the fight for third ahead of Ian Quinn (FA Kart) with Blake Korth (FA Kart) in fifth.

The day was one to remember for Thomas Annunziata (Nitro Kart), scoring his first WKA Manufacturers Cup Series victory. Annunziata was able to battle the wet course during qualifying, coming up short in the opening heat while scoring the win in Heat #2. The pole of the main event went to H1 winner Mateo Rubio-Luengo (Benik). After the opening lap skirmish sorted out the field, Annuziata came out as the leader with Mateo outside the top-five. That was all Thomas needed, leading all 14 laps for the victory. Brent Crews (Nitro Kart) started seventh and was quickly into second, unable to run down Annunziata. Jimmie Lockhart (Benik) earned his first career podium finish, besting Mateo and Annie Rhule (Energy) for the third spot.

Danny Dyszelski (Parolin) was able to earn his first WKA victory in the Yamaha Sportsman category. It was a spin and win for the North Carolina driver who led the first few laps before spinning. That gave the lead to Annie Rhule (Energy) until Dyszelski retook the top spot, and drove away to the victory by nearly eight seconds. Rhule and Paige Crawford (Benik) put two female drivers on the podium with Thomas Schrage (PCR) and Miles Murray (Nitro Kart) completing the top-five.

A third Cadet class was added as a Local Option category for the weekend with the Briggs 206 Cadet class joining the order. Sam Corry (Tony Kart) took the win, driving away to a two-second advantage over Hunter Yeany (Benik) with Sebastian Ng (Nitro Kart) in third. James Overbeck and Cash Wyke (Nitro Kart) ran fourth and fifth. 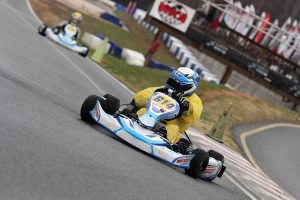 Ben Maier (Nitro Kart) made it three straight in WKA competition for the Micro Swift division. Maier was on the challenge, with Danny Dyszelski (Energy) leading the way through both heat races. Maier got the jump on DD from the outside of row one, leading all 13 laps for the victory. Adam Brickley made it a Nitro Kart 1-2, beating Dyszelski for the second spot. Ayden Patty (Nitro Kart) ran fourth, edging out Hoyt Mohr (Tony Kart) for the spot.

Chase Groh took the victory in the return of the Kid Karts class back to the Manufacturers Cup Series program. Groh (Top Kart) drove to a 16-second advantage in the main event for the victoy. Sam Tutwiler (Birel ART) ran second with Matteo Franco-Ruggiero (Tony Kart) making up the podium. Hudson Floyd (Birel ART) and Logan Kovalovsky (Tony Kart) completed the top-five.