Podiums Come One After the Other for Energy Corse 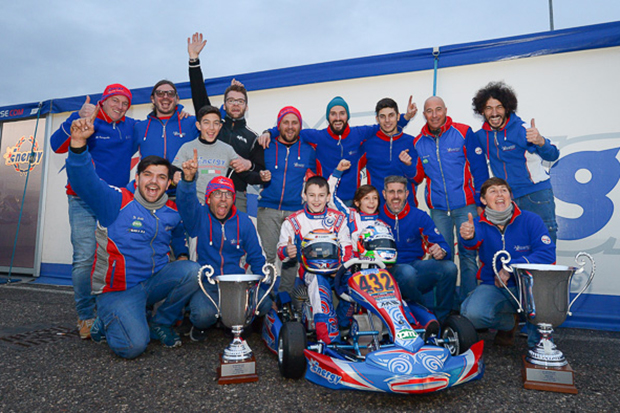 The 23rd edition of the Winter Cup at Lonato, like the WSK Super Master Series at La Conca, was another opportunity to demonstrate that the Energy Corse chassis and the team remain relentless international benchmarks. Very well represented in Lonato in the Finals in all categories, the Energy brand achieved a magnificent double in Mini Rok with the promising Italian Andrea Antonelli and Poland’s Karol Pasiewicz from the team Revolution Motorsport! And at the WSK in 60 Mini, Antonelli took another victory, while the Russian Kirill Kutskov, another member of the factory team, was on the third step of the podium!

A lot of work upstream

In the paddock as well on the track, the professionalism of the Energy brand pushes the drivers and the technicians to give the best of themselves at each race. This “Energy Power” continued to have its effects in recent weeks. It must be said that the team led by Mick Panigada has perfectly prepared for each of the major international competitions at the beginning of the season. “With races often with more than 300 drivers entered, it’s never easy to stand out from the crowd,” admitted the Italian team manager. “It requires constant work, the ability to adapt to weather conditions as they are changing as was the case this year, but also a constant dialogue with the driver to put him on the road to victory.”

Top places on the podium!

In Mini Rok, eight of the nine chassis entered reached the Final of the Winter Cup despite a high number of competitors: 72! Italy’s Andrea Antonelli and Poland’s Karol Pasiewicz were impressive in Qualifying and started the Final with confidence. After a continuous fight, the two Energy chassis crossed the finish line first, with the victory for Andrea ahead of Karol. “The equipment, the assistance and the coaching were perfect, both from the official Energy Corse team and from the Revolution Motorsport team. In general, I want to congratulate all those who defended our colours during the meeting,” rejoiced Mick Panigada.

Jamie Day shows off in OK-Junior

In Lonato, there were also good performances to the credit of the drivers in the other categories. In OK-Junior, Jamie Day has continued to push ahead and has been rewarded for his efforts with a remarkable comeback to 13th place in the Final. The UAE driver certainly does not lack talent, as confirmed by his two top-six finishes in the heats with a fastest lap. Although the Russian Roman Shaparov experienced a weekend to forget, the young Italian Michael Paparo succeeded in his delicate mission to qualify for the Final, where he placed 23rd.

In OK, the Irishman Ross Hayes was close to taking his place among the finalists, just like the Swede Isac Sjokvist in KZ2. The latter can however congratulate himself for having gained 30 places from Qualifying, from 66th to 36th place. While the Russian Kochev Konstantin has accumulated experience in KZ2 alongside 94 starters, Emil Skaras and Joshua Fife did not falter in the Super Heat. The Swede and the Australian managed to join the group of finalists. Skaras finished 24th overall, just ahead of Fife, up seven places.

Another victory in 60 Mini

After the snowy episode the WSK Super Master Series round at Lonato, competitors found better conditions for the continuation of the WSK at La Conca in southern Italy. When the grip became more significant, the chassis still met the expectations of the drivers. In 60 Mini, Andrea Antonelli was imperial, taking the lead of the competition at the end of the heats, before confirming in his Prefinal as well as in the Final. Overall, there were four drivers from the Energy Corse team in the top 10: the Russian Kirill Kutskov 3rd, the Australian Marcos Flack 8th and the Belgian Ean Eyckmans 9th! With Valentin Turenkov, Matheus Carvalho and Karol Pasiewicz, that made a total of seven Energy chassis qualified for the Final.

The results for Energy Corse were completed by the 16th and 24th places for Loris Cabirou and Jak Crawford in OK-Junior, as well as the 16th and 19th places for Joshua Fife and Isac Skojvist in KZ2, Emil Skaras having had to give up.

Energy at the top in the United States

The work of the Energy Corse America structure continues to bear fruit in North America. In addition to the good results achieved in the IAME categories at the Winter Series, the Florida Winter Tour ended on a positive note in Orlando as part of the Rok Cup USA. In Junior, Luca Mars placed 5th overall, while Hugh Templeman entered the top ten in Shifter Master. In Mini, Alex Powell and Diego Laroque created a nice group shot in the 4th and 5th positions, while Paul Bocuse was highlighted by placing 4th in the event at Ocala. In Micro finally, Danny Dyszelski continues his brilliant results: 2nd in Ocala as well as Orlando, he wins the title of 2018 Vice Champion in this series!

In Italy and around the world, teams in the colours of Energy Corse are already setting out to conquer new results …