It’s time to hold everyone to a higher standard 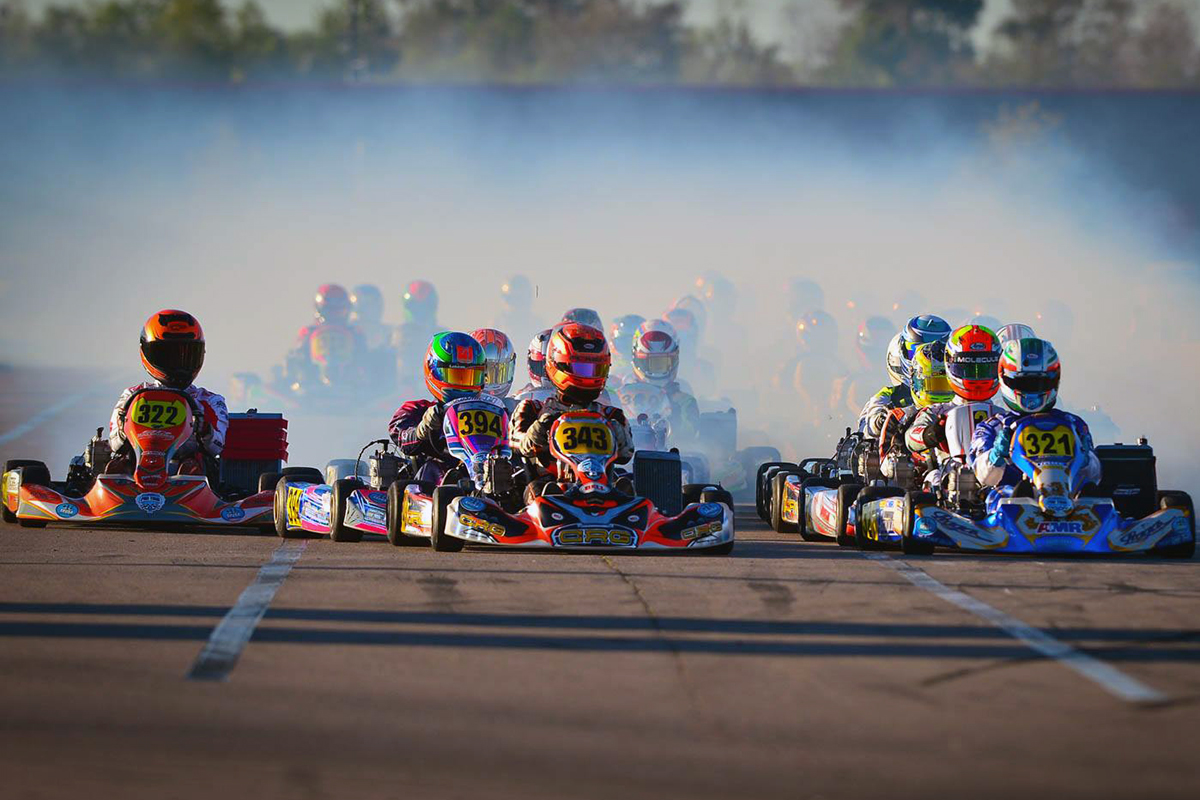 Like so many of those enthusiasts who raced karts in the 80s and 90s, I smile widely when I think back to my first years in the sport. I think that it was simpler then.  I loved getting up at 4:30 am to drive an hour to my club track to make sure I had a front row parking spot, primarily because I didn’t have a rolling stand and needed to push my kart to the grid. Those were painfully early mornings, leaving the house in the dark with my MXK kart strapped to the truck cap of my pick-up, but I always felt wide awake and excited the entire trip. I was 27 and had waited all my life to have enough money to go racing. 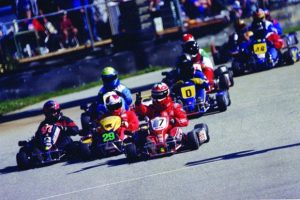 Now, when I close my eyes to relive those days, especially considering the lack of racecraft that I now see, I quickly remember my personal approach to each race.  I was taught that racing required patience, respect and skill. You had to earn your passes.  With that initial training from the veterans of my club, I wanted my overtakes to be clean, I demanded it of myself.  For the most part, they all were. I raced hard, and I worked my ass off to make passes. I didn’t throw my kart inside a guy and hammer into the side of him, I worked to beat him to the apex. There was one particular corner at our track where I was taught that you didn’t need to pass your competition going to the apex, in fact, you just needed to beat him to the exit point. That was such sound advice.  I respected the craft. It was something I wanted to understand and get good at.

That was the culture back then. In the mid-90s, my kart didn’t have a nosecone and it obviously didn’t have a full width rear bumper. We raced close – wheel to wheel. The only time you touched the guy in front of you was to push him or her down the straightaway, and you worked your ass off to set-up a pass and force your competition into making a mistake. We all eventually installed the big ‘cowcatcher’ nosecone, but the rear wheels were still exposed. We didn’t bump and run, and if there was an incident in front of us, we actually used the brakes and tried to avoid it.  I’m sure you see where I’m going with this, because this is not what we see on the national level these days. Karts are battering rams, and if the track is blocked in front of you, you smash the throttle like Harry Hogg is telling you that he ‘believes it in his heart’ that you can make it through. But this isn’t ‘Days of Thunder’, is it?  Watching kids drive flat-out under a waving yellow flag and directly into the middle of a wreck still boggles my mind. And we see it every weekend.

I recently posted an analogy regarding the current approach to racing on my Facebook account and it has fueled much discussion.  There is emotion and motivation in these comments, and that’s a good thing.  It means that people care and they want to see change.  The quality of racing on the national level is very poor overall, and there is simply a glaring lack of racecraft and respect.  So, what do we do to remedy this?

The change many of us would like to see is the removal of the nosecone and the full width rear bumpers.  I expect that this would alter the racecraft we see pretty quickly, because nothing teaches someone a lesson better than a painful result.  As kids, we only touched a hot stove once, right? But, I think we all know that the nosecones and bumpers aren’t going anywhere, which is a shame. I do seriously want to remove the full width rear bumpers to return competition karts to pure racing machines, not bumper karts more akin to rental rides.  So, again, what needs to change and what CAN we change? 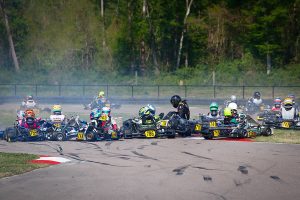 Drivers need to be looking ahead, and not stuck on the bumper in front of them (Photo: On Track Promotions – otp.ca)

Before I address that statement, let me lay out the fact that I believe that every component of the equation is to blame for the lack of racecraft we see in national racing these days. Drivers, tuners, coaches, parents and the organizations all play a role in where were currently find ourselves.

First and foremost, I will always lay the primary fault on the driver.  We cannot celebrate a driver for winning if we also deflect guilt for poor driving. The driver is in full control of their approach and all of the input that is directed through the steering wheel and the pedals. If the person in the seat is driving erratically, if they are over-aggressive or if they are simply a dirty driver, that’s on them, first and foremost. He or she has the ability to make their own decisions, to decide between right and wrong. If they cannot, they have no business being in control of an 80 mph, 200-lb weapon.

Next on the responsibility list is the parents and those who have an influence in the driver’s style, skills, approach and the pressure he or she feels. The basic approach to competition is taught, on the track and in life, and the concept of what is acceptable on the racetrack comes from the home, the team tent and the shop.  Again, I’m not laying blame on any one entity, everyone plays a role. If change is to occur, we need to mobilize all influencers.

The racing organization is a big part of the landscape as well.  The level to which they police on-track behavior sets the boundaries that their racers will challenge, because as we all know, racers will constantly push the boundaries, whether it’s on the track, in the trailer or in the dyno room.  If the organization isn’t controlling what can and cannot be done, what is or is not acceptable, they carry some of the responsibility.  Many of us born in the 70s or earlier were ‘trained’ with a belt, a hand or a switch, but we got the picture quickly and learned what was acceptable within our own world.  Our parents made sure that we were taught what was right and wrong, and what was acceptable or not.  I listed the racers as the primary line of responsibility, but in certain areas, we’re talking about kids and young adults.  There are rules to life and there are rules to racing, and if the organizations become more aggressive and pro-active in enforcing and teaching the rulebook that they present for competition, things could be changed quickly. 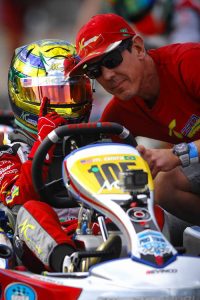 Drivers need to receive the proper instructions from those around them (Photo: On Track Promotions – otp.ca)

As I’ve stated before, I believe that the poor driving could be ended overnight if the hammer was dropped with harsh penalties on day one of the next race on the schedule.  There would be pissed off parents, team owners threatening to run a different series, and crying kids, but if they started issuing five-position penalties for anyone who even touched the guy in front of him before exiting turn one, we’d have some very clean starts on Sunday. Park some people for the day or the weekend for blatant takeout moves, and they’d have attached consequences to actions.  Because really, isn’t that the issue here?  There are simply no clear cut, significant consequences for drilling someone going into turn one, or taking a guy out on the final lap.

As a higher concept, that really doesn’t feel like the right concept to be teaching our children, does it?

Lastly, I will accept some blame in this issue as the Editor-in-Chief of eKartingNews.com.  We shine a large spotlight on national level racing and we promote winning by toasting those who succeed.  Our coverage fuels the pressure to perform, and I know that we play a small role in the pressure that is put on drivers.

So, again, if we need to change the culture, how do we do it?

In my opinion, it’s really pretty simple, and I’ll run down through the order of the responsibility that I just outlined.  The bottom line is that we need to hold everyone to a higher standard.

It’s time to put the responsibility for negative actions in the hands of the drivers who are pushing the pedals and steering the wheel. They are making the ultimate decisions, not anyone else.  Tuners and coaches can teach true racecraft, the respected art form that makes heroes of the professionals we all look up to.  Parents can demand more from their children and they can stop making excuses from them – and they can stop using this completely ridiculous line – ‘well, they did it to us first!”. Remember that motivational line, “do unto others’? 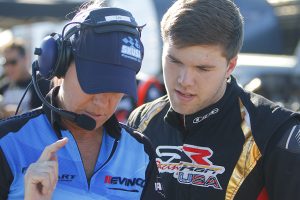 Series officials need to lay down the law, handing out penalties that fit the misconduct (Photo: On Track Promotions – otp.ca)

Second, the organizations can hold their rulebook to a higher standard.  Make it a priority, and truly enforce it.  They can play the role of the overriding parent and discipline their racers when they break the rules.  For many, if the penalty is harsh enough, it may take only one lesson. For others, an even more aggressive second-offense penalty may be necessary.  Honestly, I think if everyone holds themselves to a higher standard, we can change this current culture of karting quickly.  Drivers, parents and coaches can begin the slow re-education as to what real racecraft is, and the organizations can expedite this process by flat laying down the law. Superkarts! USA has now officially mandated pushback bumpers for their Pro Tour, so that will help with the drivers, but the race direction team still needs to identify an offense, call out the offender, drop the 500-lb penalty, and then report in on the PA.  I know that when my brother got spanked, I learned my lesson without feeling the pain myself.  I think this will work here as well.

So what about EKN’s role in the recovery of racecraft?

We’re going to make certain to highlight drivers who succeed with clean passes and clean racing. Over and above anything else, we respect drivers who can come from the back with very little contact. We see it, we love it, and we’re going to tell you about it.

Lastly, we’re putting together a new article series to promote, educate, celebrate and applaud quality racing. I’ve asked a group of people I respect as drivers and coaches to write about the current problems and what real racing looks like to them.  The series will be called ‘The Art of Racecraft’ and the first installment will run tomorrow.  I hope that you read them all. I hope that you make everyone on your team read them, and I hope you read them to your young drivers.  Let’s change the culture by promoting the level of racecraft that makes everyone stand up and cheer.

3 thoughts on “Morning Coffee: Changing the Culture of Racecraft”