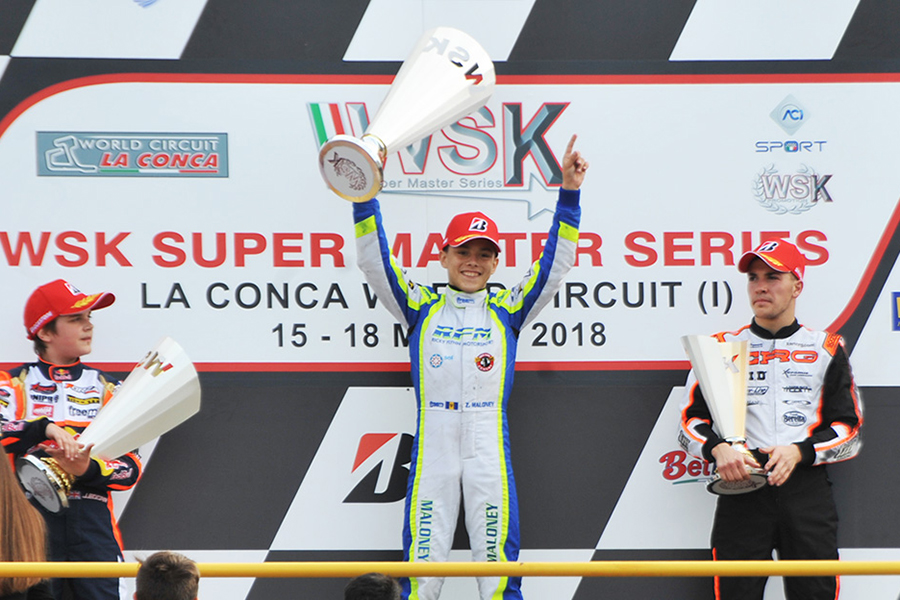 New drivers secured the victory in the Finals today in Muro Leccese’s third round of WSK Super Master Series: after the results obtained today, the classification of all categories changed a lot ahead of the double round of Sarno (SA), to be held on April 1st and 8th, that announces an very exciting sprint to the line.

It has not been easy for Paolo De Conto (CRG-TM-Bridgestone) to get the result he declared to aim to at the  eve: after winning the Prefinal, the Italian had to fend off Marco Ardigò and the Swede Simo Puhakka (both on Tony Kart-Vortex) in the Final, as the two managed to get past him early on. Back on the lead halfway through, De Conto has then never been attacked by Ardigò, who closed with a great second place in his comeback after one year of absence from racing. He led the Czech Patrik Hajek (Kosmic-Vortex). Today’s victory launches De Conto on top of the standings, as he got past the previous leader  Alex Irlando (Sodi Kart-TM).

The driver from Barbados Zak Maloney (FA Kart-Vortex-Bridgestone) recovered from the starting ninth position and installed himself behind the Dane Nicklas Nielsen (Tony Kart-Vortex) and the British Jonny Edgar (Exprit-TM), the pairing that was battling out the final victory in OK. Maloney emerged victorious in the three-way fight though, leading Edgar. The third place was eventually obtained by the Spanish driver Pedro Hiltbrand (CRG-TM) in the sprint to the line. The victory obtained today promoted Maloney to the 4th place of the classification, while the German Hannes Janker (KR-Parilla) kept the lead thanks to the seventh place obtained today.

David recovers and takes the win in OK Junior

The most effective jump off the starting grid of the OK Junior Final was put in by the Estonian driver Paul Aron (FA-Vortex-Vega), who got the lead early on from the third row of the grid. The French Hadrien David (Kosmic-Vortex) did an even better job sliding in the leading group from P7 and taking the lead of the race at halfway through. The Brazilian Gabriel Bortoleto (CRG-TM) has also been very good. He managed to get the lead of the race for a few laps, before trailing the winner David. Aron closed his effort in P3 instead. This victory made David climb up to the fourth place of the classification, while the Russian Kirill Small (Tony Kart-Vortex) kept the lead despite ending ninth today.

The victory needed by Andrea Antonelli (Energy-TM-Vega) to recover some lost ground at the beginning of the season in 60 Mini arrived in La Conca in a solid way. The driver from Bologna got away from the pole position, pulled away from his rivals and crossed the finish line as the winner. Behind him, the Norwegian Martinius Stenshorne (Parolin-TM) and the Russian Kirill Kutskov (Energy-TM) kept exchanging their positions until Stenshorne, who recovered well from the 4th row of the starting grid, closed his effort in P2 leading Kutskov. The Norwegian is still leading the classification, but Antonelli is closing in.