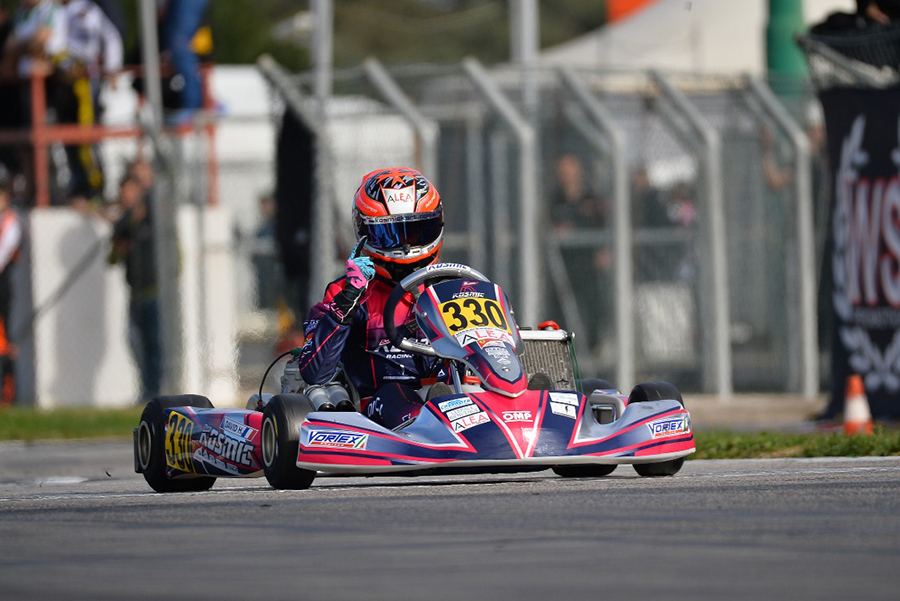 In the Final of OKJ class of the third round of WSK David Hadrien led the Kosmic Racing Department colours on the top step of the podium.

The third round of the WSK Super Master Series proved to be an event to be framed for the Kosmic Racing Department: on the 1.250 meters of the International La Conca circuit of Muro Leccese, in fact, the colors of our racing department shone in the OKJ category, where David Hadrien has gained increasingly important results until the victory in the Final on Sunday.

At the wheel of his Kosmic Mercury S chassis powered by Vortex engine, the French driver scored a first success in the eliminatory heat of Saturday afternoon, which was followed by a fourth place in the A prefinal, only the beginning than what he managed to accomplish in final race of the weekend. In the Final David has first let his rivals fighting and then placed the decisive attack six laps from the checkered flag, keeping the position until the finish line with about a second ahead of his direct chaser.

Beside the first victory of the 2018 season, also the excellent third place of Patrik Hajek in KZ2: the vice- Super Master Series Champion 2017 gave his best since the qualifying heats, winning the third position first and the fourth place in prefinal then. Having reached the podium in the decisive race was the right reward for his hard work, furthermore Patrik has reached the fourth overall position in the general ranking of the Championship.

In addition to that, we must also mention the excellent work done by Roman Stanek in the OK category, with the victory of a heat, which was followed by the fourth place in the prefinal. The sixth position in the Final, however, does not really do him justice, but it will be the starting point to do even better in the next competitive events.

All our other drivers, have increased their experience in the management of the race, starting from Axel Bengtsson and Oliver Rasmussen in KZ2 class, next to Viktor Gustafsson (OK) and Rafael Camara (OKJ), authors of an excellent work that will give us results in the next commitments.

In two weeks, the Kosmic Racing Department will be called back on track for the “recovery” of the second WSK round of Lonato, scheduled at the International Circuit of Naples (Italy) on the weekend of March 29th – April 1st.