The season is about to go into absolute overdrive as the anticipation has been electric throughout this entire off season. Pre-registration and season passes are at an all time high and we expect the competition to be more extreme than ever before. Teams and shops are relaying a flurry of activity and the most exciting news is the amount of new talent coming to participate at the Gearup Challenge. More great news is the return of past champions and racers that are set to compete in this years championship. 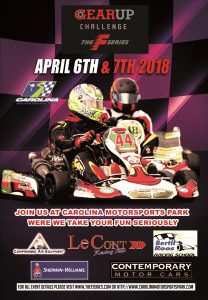 We had released a small teaser in regards to our awards for the coming season and again we are not yet set to release all the details as they seem to be growing by the minute! However we can promise that once released everyone will be taken by the amount of incentives and prizes offered to the racers that call the F-Series home. From trips to engines to all in season passes and rides in Formula 2000 cars are just a bit of what’s in store for the racers.

A little insight to what is expected in the classes competing at the 2018 Gearup Challenge. Cadet drivers be ready for a battle unlike any other! With the option of two classes for cadet drivers the prizes and value for the racer is unmatched. The cadet classes have been so well received and entries are already matching last years high. Formula J has always been tough and large in numbers and we are confident that the class will continue to be one of the hardest battles in the series! As for what many have named the backbone of the series the F125 is once again strong and will always hold a special place in the program. Formula Tag will be as usual the true test of machine and man as the manufactures are all looking at this title with anticipation. Of course the same goes for KZ Shifter and we are super excited that the program has created so much buzz, enticing racers from across the US while Europe and Canada are also well represented. Rok Shifter has been on a steady climb and with a big promotion from Rok Cup we are very confident this class will see fantastic numbers. Honda has been a very strong shifter program in the US and that is exactly what it will remain if the racers continue to register at this rate!

As always we are offering early registration discounts and huge savings in the season pass option. An added extra incentive for Season pass holders in 2018 are chances to win many great prizes coming from the series and our sponsors. Full event details and Hotel block group rates are available on the website. Of course group rates and financial incentives are time sensitive.

We have attached links below to make the first and every race of the season more enjoyable.