Great Performance by Dante and Maranello in a Tricky Margutti Trophy 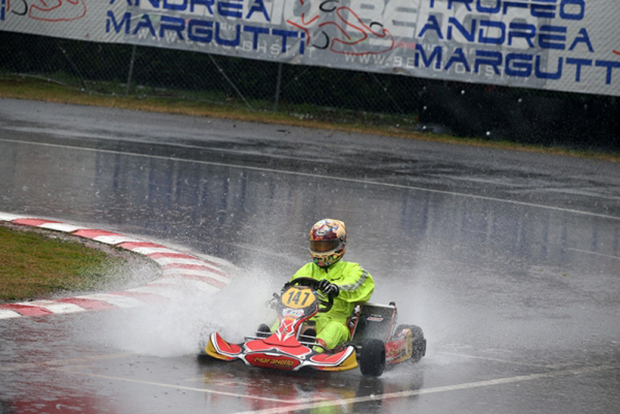 Massimo Dante closed his effort with an excellent fifth place in KZ2 at the 29th Andrea Margutti Trophy under the rain in Lonato. Alexandru Iancu in the top ten in 60 Mini.

It would have been difficult to find more mutable weather conditions than what happened in Lonato during the 29th Andea Margutti Trophy, race organized by Parma Motorsport, but Maranello Kart’s Racing Team managed to shine nevertheless.

From the springy weather of qualifying on Friday, to the wet conditions on Saturday during the heats and the deluge on Sunday for the closing stages: weather has certainly made it tricky to find the best competitiveness. Massimo Dante deserved therefore a round of applause as he has been very strong in all conditions, as did all Maranello Kart’s protagonists that have given their best to get a good result.

Dante and his Maranello-Tm magnificently managed by the team in KZ2 have really outdone themselves in this occasion: the Italian driver has always been among the main protagonists of the event, from the second place in qualifying and the leadership of Group 3, to the fourth position after heats thanks to a second a third and fourth place, up to the final fifth position under the deluge. Hats off!

The Romanian driver Alexandru Iancu of Maranello-Tm confirmed to be among the protagonists of 60 Mini and ended the Final in 10th place. The Austrian driver Lukas Zbul of Team SRP had a troubled weekend instead and could not go beyond the second chance race, as happened to the Romanian Cristian Stan Rares.