CRG Leaving the Mark on the Andrea Margutti Trophy 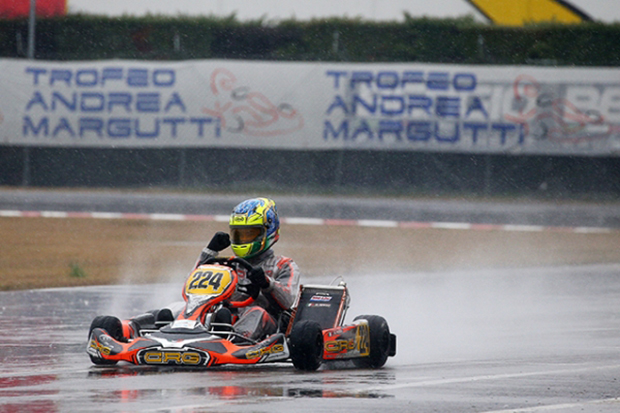 CRG got the full haul in Lonato at the 29th Andrea Margutti Trophy with Andrea Rosso in OK and Enzo Trulli, as the latter led Gabriel Bortoleto in OK-Junior. Also on the podium of KZ2, Fabian Federer (SRP) and Benjamin Tornqvist (CRG Holland).

The Andrea Margutti Trophy has seen CRG drivers as protagonists in all categories, in what has been a very wet and hard-fought 29th edition, that ended with the victory going to  Andrea Rosso in OK and to the young Enzo Trulli in OK-Junior, who scored his maiden win with the Italian outfit in this way.

Andrea Rosso in OK and Enzo Trulli in OK-Junior have been the two splendid winners of their finals at the end of two very difficult races due to rain that has fallen on the circuit of Lonato for the whole day. Gabriel Bortoleto and Fabio Spina, were great protagonists of OK-Junior, while Fabian Federer and Benjamin Tonrqvist ended on the podium of KZ2.

Andrea Rosso put in a crescendo of performance in OK, winning the heats before dominating the Prefinal and Final, posting also the fastest lap of the race. This triumphant run allowed him to win his second Andrea Margutti Trophy in a row, after taking the victory in Junior last year. Asia Mondino has also run a good race ending 12th, while Franco Colapinto had to retire early on from the Final, after being ninth in the Prefinal.

Enzo Trulli has been very strong for the whole weekend in Lonato, and managed to complete the successful overtaking move in the closing laps of the OK-Junior Final, taking the win from his team mate Gabriel Bortoleto, who had dominated qualifying and Prefinal. Fabio Spina was also among the quickest ending a good battle with his rivals in third place, but was handed a 3s time penalty due to the dropped front fairing, which relegated him to the final P5. The young Chinese driver of CRG Huang Xizheng, run a solid race ending 13th, as did the American Tyler Maxson who closed his effort in 15th place.

An incredible fight for the top has been fought in KZ2 on a circuit soaked by the falling water. Fabian Federer and team SRP claimed a deserved second place leading CRG Holland’s Benjamin Tornqvist, while the top step of the podium went to Alessio Lorandi.  Max Tubben, sixth for CRG Holland, and Alessandro Giardelli seventh for CRG Racing Team after being among the quickest of the whole weekend, have been very strong in Lonato. Emilien Denner was 22nd on Kalì-Kart, while Filippo Berto had to retire instead.

Kiano Blum and team SRP ended fourth in 60 Mini, while the Russian Dmitry Matveev of team Gamoto was seventh.