Mini and Junior drivers battle at the front of big fields 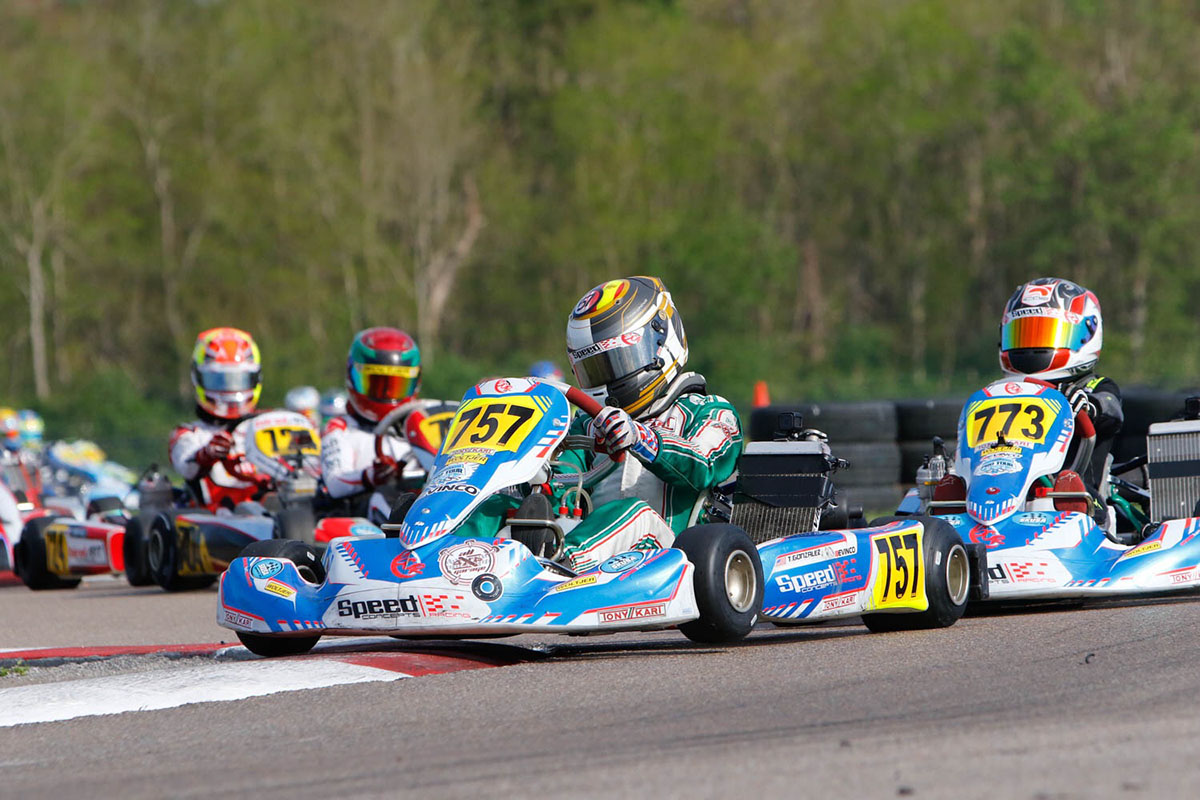 Descending on the NOLA Motorsports Park facility this past weekend for the opening round of the 2018 Superkarts! USA (SKUSA) Pro Tour, Speed Concepts Racing would flex their muscles in a pair of divisions. Showing speed in both the Mini Swift and X30 Junior categories, the Orlando, Florida based team would secure pole positions, heat race wins and a main event victory, including an impressive 1-2 finish in X30 Junior.

Tyler Gonzalez led the X30 Junior field in Saturday’s qualifying, claiming his first Pro Tour pole position of the year while fellow Speed Concepts Racing driver Justin Arseneau would circuit with the third quickest lap. Arseneau would get the best of the field in the prefinal taking the win while Gonzalez chased him across the line for a 1-2 finish, setting up an all Speed Concepts Racing front row for the main event. In a fierce on track battle in the day’s may event, Arseneau ended his race fifth while Gonzalez was classified in ninth.

Sunday once again saw Gonzalez and Arseneau in the top-ten after qualifying with third and sixth place results respectively. In the prefinal, both drivers advanced to the front of the field with Arseneau claiming his first X30 Junior prefinal win with Gonzalez close behind in third. All would come to a head in the main event as Tyler Gonzalez was able to outduel the strong forty kart field for his first Pro Tour victory of the year. In dominating fashion, Speed Concepts Racing claimed the top two steps of the podium with Arseneau coming home with an impressive second place finish.

“I really feel bad for our third junior driver, Kyffin Simpson,” explained Mike Speed, Owner of Speed Concepts Racing. “We struggled a little this weekend with an engine gremlin that kept him from showing his true speed in qualifying. With a starting position deep in the field, Kyffin was involved in an incident that bent his chassis and therefore we needed to change. It was a disappointing weekend for him results wise, but we always win as a team and lose as a team. We are already working hard to ensure that he is back at the front of the field for our next event in two week’s time.”

After qualifying in the top-five and finishing tenth with the fastest lap of Saturday’s main event, Alex Powell claimed the IAME Mini Swift pole positon on Sunday. Showing the outright speed to compete for the race win, an unfortunate incident at the start of the main event put him on the sidelines and out of the event.

Noah Baker had a strong weekend in New Orleans as he was consistently in the top-ten and his results showed that. With a seventh place qualifying effort in Saturday, Baker steered his Speed Concepts Racing entry to a ninth place finish. On Sunday, Baker overcame an average qualifying effort to drive his way forward to finish in the tenth position. Fellow Mini Swift driver Paul Bocuse overcame an incident in Saturday’s final to consistently improve on Sunday. Turning his 13th place qualifying run into a tenth place finish in the prefinal, Bocuse advanced further up the order claiming a solid seventh place finish.