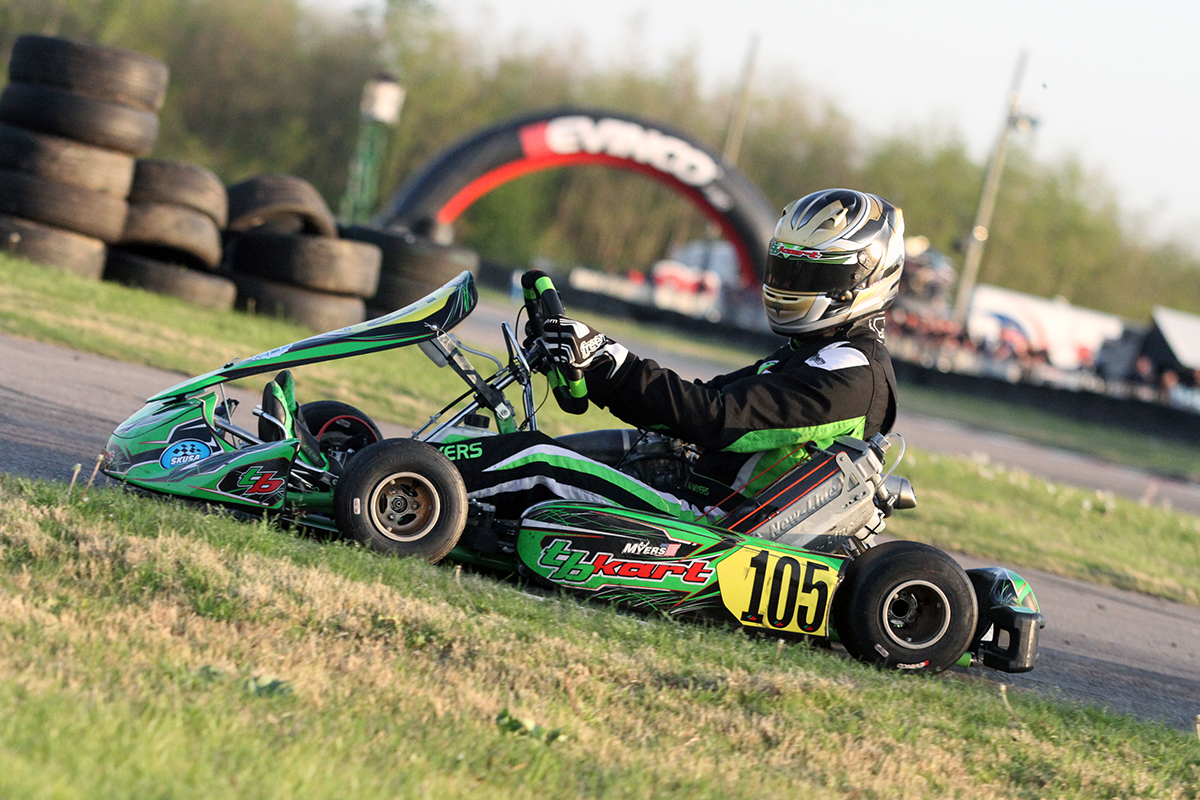 With the opening round of the Superkarts! USA Pro Tour having been logged on Saturday at NOLA Motorsports Park, the competition landscape for all nine classes became much more clear. The top contenders stepped to the forefront as the green flag was waved on the season, and Sunday’s action proved to both confirm the initial title contenders and introduce new drivers to the mix. For the most part, the racing was clean and exciting around the 1.1-mile, 17-turn layout, although the X30 Junior class continues to struggle with poor racecraft and chaotic opening laps where the use of brakes seems to be non-existent.  Nash Motorsportz’ Christian Brooks (CRG) continued his torrid pace, backing up his Saturday runner-up finish in X30 Senior with an impressive win on Sunday, while TB Kart USA’s AJ Myers outgunned MRC’s Billy Musgrave (Aluminos) for the S1 win.

You could see in AJ Myers face during Saturday podium ceremonies that he felt one got away from him in S1 Pro Stock Honda. The TB Kart USA driver set the record straight on Sunday, sweeping the day’s action to position him in the championship hunt. Myers set the quick time in qualifying (1:00.233), nearly clearing the field by two tenths of a second. It was a wire-to-wire win in the Prefinal, with Musgrave putting on the pressure late and coming up just short at the line by five hundredths of a second. The holeshot went to Myers, jumping out to a solid lead in the opening corners with Musgrave having to fight off the pack for second. Once he settled in, Musgrave began running down Myers bit by bit. Once there, Musgrave made one pass to take the lead with Myers striking back. From there Myers was able to establish enough of a gap to go unchallenged to the victory, the third of his career. Musgrave settled for second, one step up from Saturday, securing his bid in the early championship chase. The fight for the final step of the podium went down to the wire with last year’s winner Hunter Pickett (Aluminos) crossing the line in third, only to suffer a five-second penalty for a jump start. That put Nic LeDuc (Sodikart) into third with Saturday winner Austin Garrison (CompKart) in fourth. Defending SKUSA Pro Tour champion Jake French (Sodikart) bounced back from his DNF to place fifth. 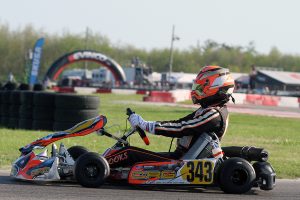 Last year, Christian Brooks left as the X30 Senior championship leader, only to not race the rest of the season. A year later, Brooks was able to secure the top spot in the championship chase, this time with a victory. Brooks (CRG) was ninth in qualifying, and knifed his way forward to second behind Canadian Samuel Lupien (Kosmic) and top qualifier Jorge Pescador (Praga). The top two, along with the rest of the field, were able to make it through the opening corner without issues. Lupien retained the lead in his Rolison Performance Group entry with Brooks on his bumper. Brooks took over the lead on lap two and never looked back. The Californian never put a wheel wrong, keeping quick pace to score his first Senior victory. Lupien had to settle for second with Franklin Motorsports Alex Bertagnoli with his first podium in the Kart Republic debut. Rolison Performance Group Hannah Greenemeier (Kosmic) was solid in her Senior debut on the SKUSA Pro Tour. A strong rebound performance on Saturday was matched with another drive forward in the Final. Greenemeier, who posted the fast lap of the race, started 12th and was able to put herself into fourth by the checkered flag. A two-position penalty for blocking however dropped her out of the top-five, putting Pescador in fourth and two-time defending champion Ryan Norberg (Birel ART) into fifth. Saturday winner Jake Craig (Tony Kart) was driven over at the start of the Prefinal, put 40th on the grid for the Final. Craig gained 31 positions in 22 laps to end up ninth for the hard charger award.

Pedro Lopes (Kosmic) stamped himself as the driver to beat in the S2 Semi-Pro Stock Honda category. The Brazilian swept the action on Sunday, securing maximum points to leave with a perfect score in Round Two. Lopes only blemish was getting off the line in the Prefinal. Rolison Performance Group teammate Cameron Egger (Komsic) got out to a big lead, only to have Lopes recover and score the win. Lopes launch was cleaner in the Final, leading all 22 laps along with fast laps of the race. Egger settled for second with Matt Paesch (CompKart) crossing the line in third. Paesch however was penalized for passing under yellow. That promoted Devon Smith-Harden (TB Kart) into third, earning his first SKUSA Pro Tour podium finish. Blair Hosie (Alpha) and Michael Ilavia (Birel ART) completed the top-five. 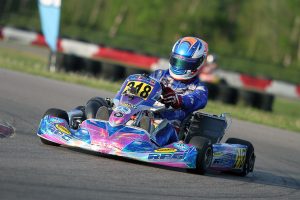 X30 Master was a three driver fight all day long. Three-time SuperNationals winner Leonardo Nienkotter (CompKart) was making his SKUSA Pro Tour debut on the weekend. A possible victory on Saturday was taken away following contact. On Sunday, the Brazilian bounced back to sweep the day’s action. Nienkotter was challenged in the Prefinal by fellow CompKart driver Travis Irving, eventually securing the race win. Paulo Lopes (Kosmic) was close behind in third, with the three pulling away again in the main event. Nienkotter led the opening laps of the Final, with Irving assuming the position on lap 13. Nienkotter took back the position coming to the white, and held on to secure his first SKUSA Pro Tour victory. Irving crossed the line in second, only to suffer a five-second penalty for a starting infraction. That put Lopes on the podium in second and promoted Saturday winner Jess Peterson (Birel ART) to third. Two-time defending champion Derek Wang (FA Kart) placed fourth, with Irving in fifth.

The S4 Super Master Stock Honda division was a fight all day long. Robert Marks (CRG) found more speed overnight, taking the fast lap in Qualifying and winning the Prefinal over Saturday winner John Crow (Aluminos). Marks slipped back to third with SuperNationals winner Mike Jones (Sodikart) jumping out front with Crow. The two went back and forth until Jones secured the point, and earned his second career SKUSA Pro Tour victory. Crow and Marks joined him on the steps with Rod Clinard (CRG) the provisional finisher in fourth. Clinard was removed from the results for too wide at the rear tires, giving Mike Rivera (CKR) a career best finish of fourth and Nick Firestone (DR Kart) to fifth. 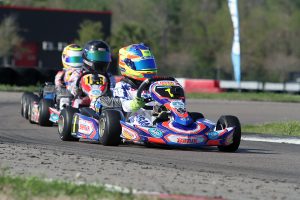 The X30 Junior drivers did not have a stellar day on Sunday. A false start and then a red flag for a blocked track following a turn one incident that collected a number of drivers put a black eye on the class overall. Once the race was green for good, contact continued with podium finisher Arias Deukmedjian (Tony Kart) getting spun around and shuffled to the back. Three drivers took a turn at the point, including Saturday winner Matheus Morgatto (Parolin), Junior rookie Santiago Trisini (Kart Republic), and Prefinal winner Justin Arseneau (Tony Kart). Tyler Gonzalez (Tony Kart) kept within the lead group, waiting for the final circuit to lead the way, reaching the checkered flag to earn his first SKUSA since winning the 2016 SuperNationals. Arseneau came just six hundredths short at the line, with Trisini earning the third step of the podium with KartSport North America. Morgatto was fourth with top qualifier Jeremy Fairbairn (Tony Kart) in fifth. Thomas Nepveu (Birel ART) was on the move throughout the race, advancing 38 spots to end up sixth.

On the flip side, the Mini Swift class kept their heads on for their Final on Sunday, making it through the opening corners with no major incidents after watching the Junior drivers make a mess of things. Defending champion Carson Morgan (Benik) nearly made it a perfect score on the day, helping his chances at a second straight title. Morgan was edged out for the pole position by Alex Powell (Energy), just five hundredths separated the two with Jace Park (Parolin) within seven hundredths of Powell’s time. Powell was shuffled back in the Prefinal as Morgan won, and Anderson Leonard (Benik) joined the two at the front of the field in the Final. The three worked together to get away from the rest of the drivers, never exchanging positions. It looked as if Park was sizing up the champion for a last lap pass. It never came, and Leonard dove in an attempt to steal second. This allowed Morgan to celebrate his victory with ease, leaving with the championship lead. Leonard beat Park to the line for the victory, and both earned their first SKUSA Pro Tour podium. Brent Crews (Nitro Kart) battled his way from 11th to fourth, working past Saturday winner Jeremy Fletcher (Tony Kart) late in the race. 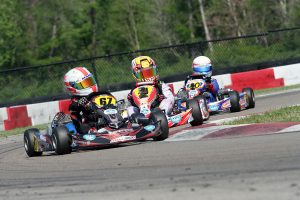 One of the best races on the day came in the Micro Swift class. Ben Maier (Nitro Kart) showed he is one to contend for the championship with his sweep of Sunday. Maier edged out Logan Julien (Merlin) for the fast time in qualifying, before holding off Caleb Gafrarar (Parolin) in the Prefinal. Both were joined by Max Garcia (Benik) at the front in the Final. Maier and Gafrarar each took their turn at the point with the Saturday winner Caleb G leading. They swapped the lead a couple times heading to the final corner. Gafrarar held a tight line into the turn, with Maier making the criss-cross to duck underneath for the drag race. A great run by Maier jolted him ahead, while Garcia swung to the outside to make it three wide at the line. Maier took the victory with Garcia slipping into second, only eight thousandths away from the win. Gafrarar registered across the line 33 thousandths back in third, making it one of the closets finishes in SKUSA history that included three drivers. Julien recovered from a tough Prefinal to advance from 13th to fourth with Franklin Motorsports / Merlin teammate Cameron Brinkman in fifth.

Two of the six Pro Tour races are now confirmed into the points calculations, and the race for the SKUSA national numbers is on.  The next round of the national championship – the ninth annual SpringNationals – will take place on May 4-6, at the new venue announced during the weekend; the Phoenix Kart Racing Association facility in Glendale, AZ.