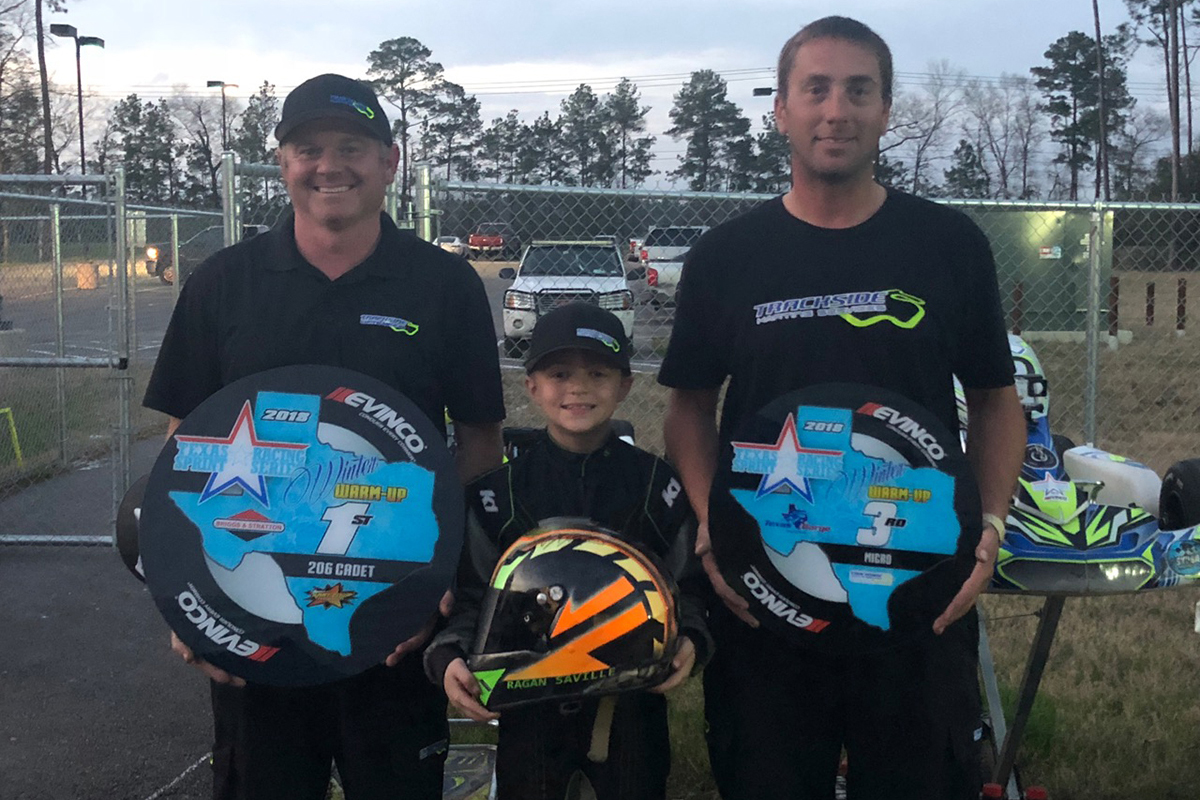 With the first event of the Texas Sprint Racing Series (TSRS) taking place this past weekend at Speedsportz Racing Park in Houston Texas, Trackside Karting Services would enter eight fierce competitors. Competing in all different categories including the LO206 Cadet class, Micro Swift, Mini Swift, X30 Junior, X30 Senior and LO206 Light, the team showed speed in every category entered for a great start to the 2018 season.

LO206 Cadet driver Ragan Saville qualified on the pole position and had a solid set of heat races. The main event showed Saville’s perfection as after losing the lead, he would make a pass with three corners remaining to take the victory. Austin Roy had a great weekend and continues to make a lot of progress. In all the heats, Roy showed the pace to be up front and when the final checkered flag flew on the weekend, Roy ended up in the fifth position. New team member Josh Maxey would show up with very little time at the Speedsportz facility but didn’t miss a beat learning the track. After a great main event, Maxey just missed the last podium position by a scant .006 seconds.

Only one driver would fly the TKS flag in the IAME Mini Swift class as Hailey Taylor looked towards the top step of the podium. Taylor didn’t have the qualifying she wanted, but never gave up throughout the weekend. Fighting some issues, the team went to work and helped improve her program throughout the heat races. Finding the necessary speed and chassis setup to fit her driving style, Hailey completed the long 20-lap race with a solid fourth place effort.

IAME Junior saw rookie driver Ryan Shehan aboard a TKS prepared COMPKART. Working on driving and chassis setup through all the heat races, Shehan had a good run in the weekend’s final and finished in a respectable fourth position. Shehan will be taking that momentum to the NOLA Motorsports Park for the first round of the Superkarts! USA (SKUSA) Pro Tour this weekend.

Tyler Orum made his Senior debut and had great speed all weekend. Winning one heat and adding a third place result in the other, the main event saw Orum on the podium. Showing the determination to win, Orum put some great opening laps together and pulled away from the field but as the race wore on a battle would ensue for the lead. Narrowly missing the win, Orum added another podium for Trackside Karting Services.

“Tyler had a good solid weekend and deserved the victory,” explained Team Manager Tim Lobaugh. “We missed the setup a little in the final, showing our speed too early. Tyler is a great driver and will win many races in 2018.”

LO206 Light saw James Lundberg, Barry Peel and long time driver Austin Osborne under the TKS banner. Peel would have a good weekend with a second place qualifying effort before some issues in the heat races. In the main event, Peel chased down the leader and would take the point briefly, before a minor mistake cost him the position and the eventual race win. He went on to finish third while scoring the fastest lap of the race.

Lobaugh added, “Austin, after being out of the seat for many seasons, had a great time battling in every heat. I am hoping he will return to battle up front some more this season.”

In the IAME Micro Swift category, Trackside Karting Services entered two drivers in Austin Roy and Ragan Saville as they both would do double duty this weekend. With Roy working on some driver coaching and chassis setup, the team would find some pace and will look forward to the next event. Saville had solid results in the three heat races and a great final running as high as the second position, but eventually finished on the third step of the podium.