Drew, Keyes and Toke double up in SoCal 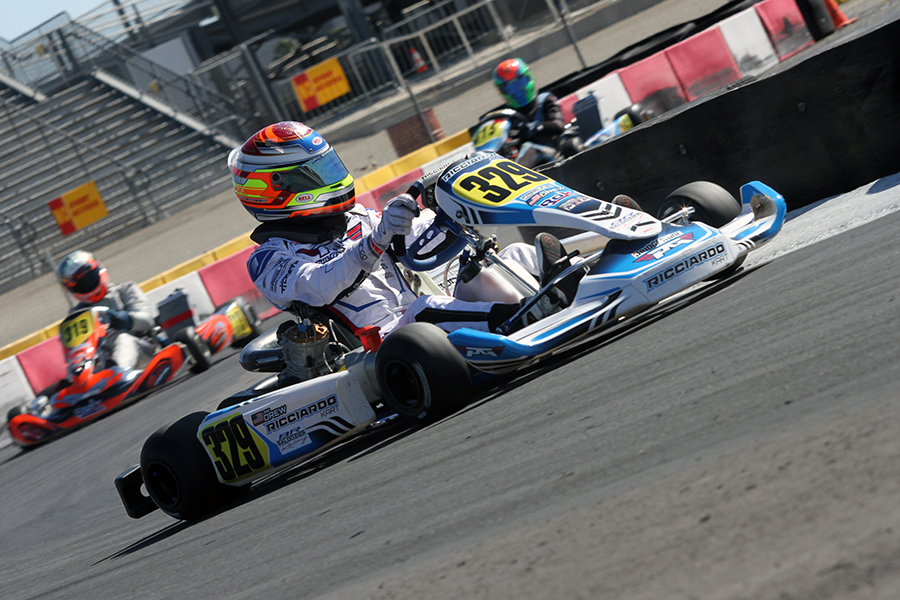 A perfect day for racing wrapped up the second stop of the 2018 Challenge of the Americas as drivers contested the fourth round of the premier west coast winter series. Over 90 drivers took to the 0.720-mile course of the CalSpeed Karting Center in Fontana, California in the nine categories, shaping up the championship chases prior to the series finale in April at Sonoma.

Earning a sweep on Saturday, Jake Drew (Ricciardo) duplicated that feat on Sunday in the Senior Rok division. Sunday’s action was a close fight, challenged in each on track session before coming away on top. Drew had to lay down a fast lap at the end of qualifying in order to edge out Colby DuBato (Vemme) for top honors in qualifying. After Jenson Altzman (FA Kart) and DuBato led early in the Prefinal, Drew ran away with the race win with DuBato in second. Drew and DuBato exchanged the lead early on in the 25-lap Final. Once Drew established himself as the leader, pulling away to a five-second advantage. Point leader Jim McKinney (FA Kart) was able to move into second, unable to close up on Drew. DuBato completed the podium with Altzman fourth and Bailey Murphy (Deadly) fifth. 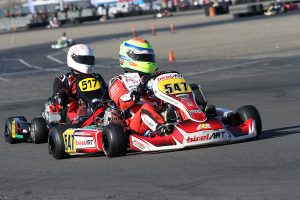 Alex Keyes put himself in the championship lead of Rok Shifter Senior with a sweep on Sunday (Photo: EKN)

Alex Keyes (Birel ART) made it a second day of sweeping the Rok Shifter Senior field to put himself into the championship lead heading into the series finale. Keyes led the entire day on Sunday, never relinquishing the top spot after qualifying P1. Keyes led all laps of the Prefinal and Final. The main event was a two driver breakaway with Clinton Schoombee (Aluminos) on Keyes’ bumper. The veteran shifterkart driver kept the pressure on throughout out the 25 laps, unable to create a situation to challenge for the lead. Kol Bailey (Praga) gained his fourth straight podium finish, out running Italian Lorenzo Lapina (Vemme) and Zach Pettinicchi (Tony Kart) for the third position. Kalvin Chen (CRG) was able to secure a second victory on the weekend in the Rok Shifter Masters division. Two-time PKRA winner Nick Firestone (DR Kart) broke up the perfect score for Chen on the day, earning fast time in qualifying. Chen went on to win both the Prefinal and Final. Zoli Sule (Aluminos) drove to second with Firestone ending up third in the Final.

Paul Bonilla (Birel ART) came back with vengeance twice in one day in Masters Rok. Bonilla lost the victory Saturday for a technical disqualification, but made sure he started Sunday on top. After qualifying P1, Bonilla was leading in the Prefinal when he pulled off with a mechanical issue. This gave Vatche Tatikian (Ricciardo) the path to victory in the race, as Bonilla would start the main event from 14th. Tatikian jumped out to a solid lead early as a large group fought for the second spot. Bonilla was into ninth after the opening circuit, and made quick work of the pack racing for second, reaching the front of the group by lap eight. From there, he ran down Tatikian and took over the lead with less than 10 laps to go. Tatikian did not let Bonilla get away, keeping on his tail, unable to make a pass attempt. Bonilla would score the victory by six tenths over Tatikian. Erik Jackson (Vemme) won the battle for third, giving him a fourth straight podium finish. Tony Rossetti (Mad-Croc) earned fast time in the main event in his fourth place result while Saturday winner Jonathan Silva (CompKart) fought from dead last to fifth. 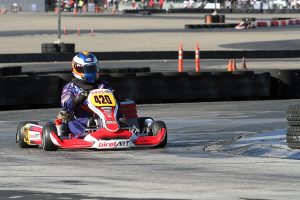 Paul Bonilla came from the back to the front for the victory in Masters Rok (Photo: EKN)

Ugo Ugochukwu came into Sunday with a near perfect score, sweeping the first three rounds in the Junior Rok division. The continue streak for Ugo (Tony Kart) nearly came to an end in qualifying, needing a 12th lap in the session to secure the fast time ahead of Ethan Ho (Redspeed). Knowing to strike early, Ho kept the pressure on Ugochukwu early in the main event. The two were swapping for the lead when contact was made going up the hill toward pit lane. Ho went into the barriers while Ugochukwu continued on. Cooper Becklin (Birel ART) came away with the lead until Austin Torgerson (Tony Kart) secured the spot and the race win. Ugochukwu ended up in fourth, but was penalized for the contact, dropping him outside the top-10 on the grid for the main. Edward Portz (FA Kart) jumped out to the lead at the beginning of the Final until Torgerson regained the lead on lap five. From there, Torgerson went on to lead the remainder of the race for his first series victory in the Junior division. The fight for second went down to the wire with Ugochukwu and Becklin. In the final corners, Becklin secured the position with Ugo in third. Ho followed Ugo through the field and was right there in fourth, until a 10-position penalty for contact dropped him out of the top-five. That promoted Bijoy Garg (Exprit) to fourth with Nolan Siegel (Exprit) into fifth.

Through the first four rounds of the Challenge, the Mini Rok division has kept up as the most competitive class. Saturday welcomed the third different winner with Logan Toke ending up on top of the podium. As Sunday unfolded, there was no clear-cut leader. Parker DeLong (Benik) came out of qualifying with fast time, while Kai Sorensen (Benik) emerged as the Prefinal winner. Toke (Top Kart) jumped on the bumper of Sorensen, pushing the two away from the rest of the field. On the final circuit, the two exchanged the lead multiple times, with Toke reaching the checkered flag first. Sorensen was second, until a two-position penalty for contact dropped him down to fourth. That put Chase Gardner (Vemme) into second and AJ Zarcone (Nitro Kart) into third. Ethan Nascimento (Vemme) rounded out the top-five. Gage Jarvis (Benik) went unchallenged in Micro Rok. 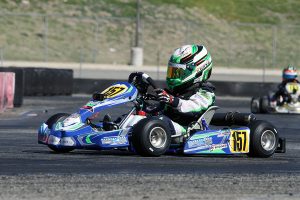 Logan Toke doubled up in the win category in Mini Rok (Photo: EKN)

David Vasquez (VLR) swept the weekend in the Briggs 206 Senior category. Vasquez won Heat #3 earlier in the day after winning both on Saturday, including fast time in qualifying. Vasquez was pressured by both Austin Torgerson (Tony Kart) and Micah Hendricks (VLR). In the end, Vasquez and Hendricks got away with Torgerson losing the draft, falling back into the clutches of the second pack. For the victory, Vasquez was able to hold off Hendricks for the win and the $500 cash prize. Torgerson was able to hold off Ryan Martin (K&K), Jenson Altzman (Exprit), and Justin Goerz (K&K) for the final step of the podium.

Ashton Torgerson (Tony Kart) came out of the heat races in Briggs 206 Junior as the top driver, earning two wins. Top qualifier and Heat #1 winner Toby Longenecker (VLR) earned the front row start with Torgerson, and the two hooked up to pull away from the field. Torgerson led the majority of the race, with Longenecker pulling the trigger with two laps to go. A solid defensive line kept Torgerson from regaining the top spot, with Longenecker securing his first Challenge victory. Torgerson settled for second with Logan Calderwood (Tony Kart) winning the battle for third over Timmy Trostel III (Margay) and Tuesday Calderwood (Tony Kart).

The championship chases have been established and now, all that waits is the final two rounds of the 2018 Challenge of the Americas. Nearly all the standings have multiple drivers in contention as the program prepares for the April 13-15 at the Simraceway Performance Karting Center in Sonoma, California. The event is forecasted to be the highest attended event of the series, and the fight for the series championship and Rok Cup International Final tickets to be awarded.