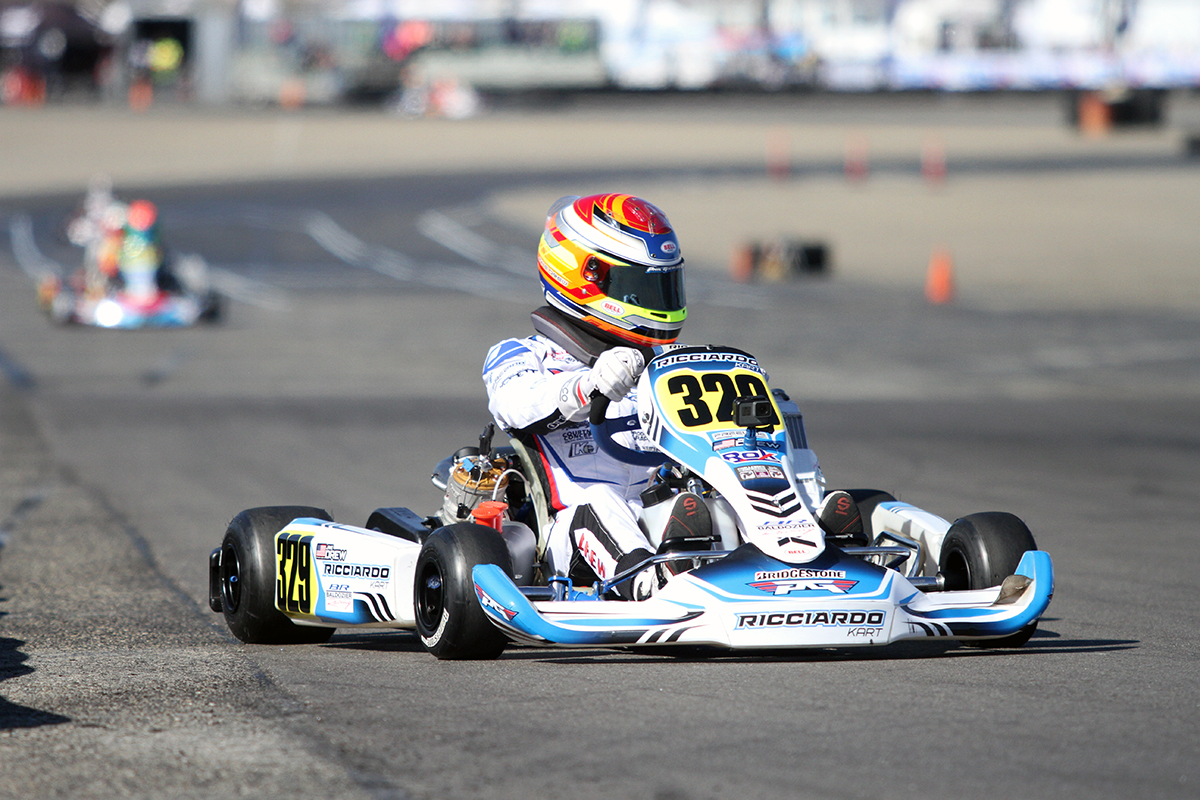 Clear blue skies and low-60s temperatures greeted the Challenge of the Americas drivers for Round #3 of the series at the 15-turn, 0.720-mile CalSpeed Karting Center in Fontana, CA.  Over 90 drivers took the track in the program’s nine categories and the day’s action featured five new winners and one driver who extended his COTA win-streak.  Jake Drew (Ricciardo) made another impactful impression as he dominated the Senior Rok action to sweep the day, while Alex Keyes followed suit in Rok Shifter Senior as he topped qualifying and both the Pre-Main and Final.  It was the first Challenge win for both drivers.  Ugo Ugochukwu (Tony Kart) extended his Junior Rok win streak to three races, once again sweeping all three sessions maintain his perfect season. The Mini Rok Final was owned by Logan Toke (Top Kart), who became the third different winner of the year, while the Masters Rok was decided off the track, providing Jonathan Silva (CompKart) his first series victory. Kalvin Chen (CRG) won in Rok Shifter Masters while Gage Jarvis (Benik) won in Micro Rok.

After not attending the opening round of the Challenge in Phoenix, Jake Drew worked diligently to come up with the money he needed to race here in CalSpeed, and he paid off his supporters with a dominant day in his Phil Giebler Racing Ricciardo. Drew dominated the Vemme Kart Senior Rok qualifying run and then topped the 17-lap Prefinal over Bailey Murphy (Deadly). Colby DuBato (Vemme) was third ahead of Phoenix podium finisher Filip Niemkiewicz (Kart Republic). Point leader Jim McKinney (FA Kart) was fifth, having had transponder issues in qualifying which put him at the tail of the grid for the Prefinal. In the 25-lap Final, Drew was unstoppable, laying down consistent laps to stretch away to a 7.578-second victory. DuBato was impressive in his run to second, while McKinney battled back to third to maintain his solid lead in the championship points. Murphy finished fourth, ahead of Jenson Altzman (FA Kart). 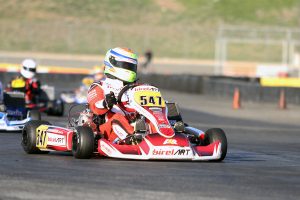 The Rok Shifter class has some big guns in the line-up, but the day was swept by multi-time Red Bull Global Rallycross Lites winner Alex Keyes (Birel ART). Keyes became the third different winner of the season, as Nicky Hays (Ricciardo) and Kol Bailey (Praga) scored in Phoenix. Clinton Schoombee (Aluminos) was second to Keyes in the Prefinal was a challenger in the chase group in the Final, fighting for the final podium positions with Bailey and Hays. With Keyes out running to a 3.387-second cushion at the checkered, and Bailey firmly into second, Hays and Schoombee were embroiled in a spirited battle for the final position on the podium. Nicky held Clinton off on the final lap, but it ended up coming short by a scant 0.071 seconds at the line. Vemme Kart’s Italian driver Lorenzo Lapini capped off the top-five. In the Rok Shifter Masters class, Kalvin Chen (CRG) scored the win by racing to eighth overall, out-running PKRA double-winner Nick Firestone (DR Kart) with Zoli Sule (Aluminos) in third.

The sweep continued for Ugo Ugochwkwu (Tony Kart)  in the Junior Rok division. The New York driver led wire-to-wire in both the Prefinal and Final sessions. The undeafeted streak continued after provisional pole sitter William Ferguson (Tony Kart) was removed from the session for a technical infraction. That promoted Ugochwkwu to the top spot of the session, going unchallenged to the checkered flag. Ethan Ho (Redspeed) was a solid runner-up all day with Austin Torgerson (Tony Kart) winning the battle for third over Edward Portz (Birel ART). Ashton Toregerson (Tony Kart) worked his way into fifth. 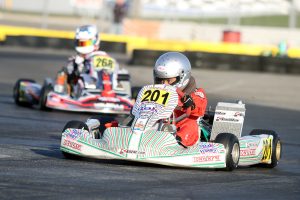 The tech barn decided the final results of the Masters Rok division. Former series champion Paul Bonilla (Birel ART) set the pace throughout the day. In the end, Bonilla was found incompliant in tech with a carburetor issue. The heated fight for second ended up being the battle for victory, eventually conquared by Jonathan Silva (CompKart) to claim his first series win. Erik Jackson (Vemme) was able to hold off Tony Rossetti (Mad-Croc) for second with David Pergande (Tony Kart) in fourth and Ed Quinn (Birel ART) fifth.

Logan Toke came away as the third different winner in the Mini Rok division. AJ Zarcone (Nitro Kart) set the pace in qualifying before Kai Sorensen (Benik) won the Prefinal. Issues for Sorensen in the Final took him out of contention, giving Chase Gardner (Vemme Kart) the lead. That was until Toke took control and ran away with the victory. Logan pulled out to a 2.3-second advantage at the end of 18 laps, with Zarcone slipping past Gardner for second. Parker DeLong (Benik) ran fourth with Stephen Eisert (Praga) in fifth. Gage Jarvis ran uncontested in the Micro Rok division. 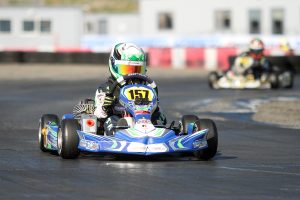 David Vasquez (VLR) swept the day in the Briggs 206 Senior category. Vasquez set the fast time in qualifying before winning both heat races on the day. PKRA winner Micah Hendricks (VLR) ran second all day. Toby Longenecker (VLR) set the pace in Briggs 206 Junior at the beginning of the day, posting fast time in qualifying before winning the opening heat race. A close battle in Heat #2 led to Ashton Torgerson (Tony Kart) coming away with the victory while Cooper Becklin (Birel ART) slipped ahead of Longenecker for second.

The third round of the Challenge featured some dominant performances, which necessitated a look deeper in the field for close wheel-to-wheel action.  Several drivers turned in strong comeback performance to knife up through the field, and they’ll all be focused on better overall outings on Sunday.  The racing gets underway at 9:40 am, as does our EKN Live coverage, with qualifying, ahead a 11:30 am PST start to the Pre-Mains.  The finals for Round #4 will roll off at 1:05 pm PST. For full streaming audio play-by-play of our coverage, head to www.ekartingnews.com/live