Nearly two months have already gone into the books for the 2018 season, and Challenge of the Americas is primed and ready to hit the halfway point of its championship series. The premier winter series on the left coast heads to the CalSpeed Karting Center in Fontana, California this weekend for Round Three and Four of the championship chase. The series kicked off in Phoenix last month, with over 80 drivers competing in the Rok Cup USA and Briggs & Stratton classes. The series is heading back to SoCal for the first time in five years, and numbers are inching closer to the triple digits with new and returning faces set for the three-day battle with Rok Cup International Final tickets to series champions on the line.

The last time the Challenge hosted an event at CalSpeed was 2013, that season’s finale weekend. Five times has the Challenge taken to the karting facility situated on the southwest corner of the Auto Club Speedway. The 7/10-mile ‘Grande’ course in the counter-clockwise direction is the layout for the weekend, set to challenge each and every category with its unique elevation and parking lot/sealer surface. 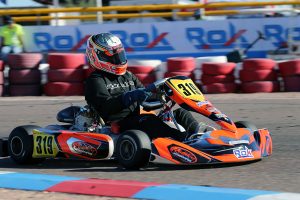 eKartingNews.com is set for the return to CalSpeed as well, providing industry-leading coverage trackside. Those karting enthusiasts not in attendance can listen from home or on the road to the EKN Live broadcast at www.ekartingnews.com/live with Rob Howden providing the play-by-play call. Daily reports and updates on the EKN Social Media network will fill up your timeline throughout the weekend.

The championship is Jim McKinney’s to lose in the Senior Rok division. The FA Kart driver from Arizona defended his home turf, sweeping the opening weekend at PKRA. Now the program heads to SoCal, where McKinney will be the driver everyone is looking to beat. In the 11-year history of the Challenge, two drivers have won the series championship without earning a victory; Luke Selliken (2015) and Philippe Gelinas (2010). With McKinney scoring maximum points in Phoenix, that will not happen this year. Filip Niemkiewicz (Kart Republic) is the top challenger thanks to his runner-up finish on Sunday in Phoenix. The Colorado driver trails by 68 points heading into the weekend. PKRA regular Bailey Murphy (Deadly) is making the trek west in hopes of continuing the championship chase, only 11 points back of Filip. The third place finish for Antonio de Lis (Tony Kart) keeps him in the hunt along with Jenson Altzman (FA Kart). A number of drivers from the SoCal area may be walk-up entries for the weekend. One to watch who is entered already is Jake Drew (Ricciardo), who has many laps around the CalSpeed facility. 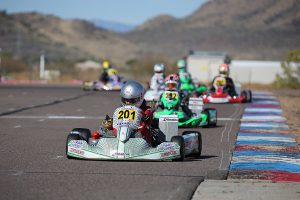 Ugo Ugochukwu (Tony Kart) put in a perfect weekend at PKRA in the Junior Rok category. Never putting a wheel wrong, the New York driver holds a 62-point lead heading into the weekend at CalSpeed. Ugo is coming off a fourth place finish at the Rok Cup USA Florida Winter Tour event in Ocala, as well. Leading the charge in the title chase is Austin Torgerson (Tony Kart), the 2016 Challenge Mini champion. Torgerson had a best finish of third at PKRA, and will be looking to turn up the pressure on Ugo this weekend. His brother Ashton Torgerson (Tony Kart) finished second on Sunday, but a DNF on Saturday has hurt his position in the point standings, as he is currently fifth behind PKRA podium finisher Carson Mallett (FA Kart) and Copper Becklin (Birel ART). Ethan Ho (OTK) is expected to put in a better challenge at his home track, along with others expected to enter trackside.

The championship in the Masters Rok division has been flipped heading into CalSpeed. Double PKRA winner and point leader Adam Kasick (CompKart) has a schedule conflict, and is heading east instead of west for a family trip. That has opened up the door for a three-driver fight heading into the second event of the series. Former champion Paul Bonilla (Birel ART) becomes the new championship leader in Kasick’s absence. Bonilla scored the most points on Sunday, but was runner-up after a third place finish on Saturday. He swapped positions with Erik Jackson (Vemme), who enters the weekend just six points back of Bonilla. Texan David Pergande sits third now, needing to finish ahead of both to cut into the 45-point deficit. Colorado driver Reynaldo Nieves (Kart Republic) is just 10 points back of him, as is looking to improve on a best finish of fourth at PKRA. The class is also among those growing for numbers with a number of California based drivers joining the party. Tony Rossetti, Branden Bell (Top Kart), and Ed Quinn (Birel ART) are among those looking to battle for podium positions. 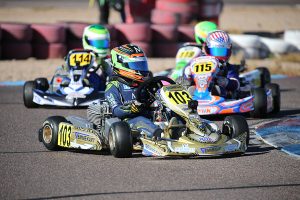 One of the most competitive classes throughout the weekend in Phoenix was the Mini Rok category. A handful of drivers were in the hunt for the top spot each on-track session, however, it was two drivers who swept each day. Enzo Swan (Benik) set the pace on Saturday while Chase Gardner (Vemme) swept the day on Sunday. Gardner came away with the championship lead, holding the top position over Swan by 31 points. Podium finishes Kai Sorensen (Benik) and Parker DeLong (Benik) are only 34 markers out of first place, with plenty of laps around CalSpeed in their pockets. As does Logan Toke (Top Kart), who sits fifth in the standings, and is focused on moving up this weekend. AJ Zarcone (Nitro Kart) is a new entry for the year, along with Stephen Eisert (Praga), and both will be aiming to steal the show. Point leader Gage Jarvis (Benik) is the lone Micro Rok driver entered for the weekend.

The Shifter Rok Senior division was split by two drivers – Kol Bailey and Nicky Hays. Bailey (Praga) was able to sweep Saturday’s action at his home track and Hays (Ricciardo) bounced back to lead throughout Sunday. Bailey’s runner-up on Sunday to Hays’ third-place finish on Saturday is the difference in the standings, with Bailey leading by seven points. Hays now has the advantage going to his home track of CalSpeed. The third round goes to the home of Alex Keyes (Birel ART), who stood on the podium both days. Keyes is just 29 points out of first, and will need a solid weekend to be in the hunt when going to Sonoma in April. New drivers will be in the hunt for podiums with CalSpeed regular Slava Prikhodko (Ricciardo), Briggs 206 Senior victor Micah Hendricks (Gold) doing double duty, and Italian Lorenzo Lapina set to join the VemmeKart USA squad in his COTA debut. 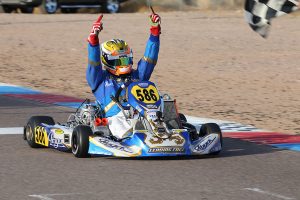 PKRA driver Micah Hendricks (VLR) left the opening Challenge weekend $500 richer with his victory in Briggs 206 Senior. Hendricks is set to battle in CalSpeed to double his earnings. Runner-up Austin Torgerson (Tony Kart) and top-five finisher Jenson Altzman (FA Kart) will be in Fontana. The K&K contingent is set to improve on their Challenge debut. One to watch will be David Vasquez (VLR), who is sure to be a podium contender. Logan Calderwood (Tony Kart) is also looking to repeat as the Briggs 206 Junior winner with podium finishers Toby Longenecker (VLR) Tuesday Calderwood (Tony Kart) joining in the fun in Fontana.