Sodikart: Second {lace at the Winter Cup with Abbasse 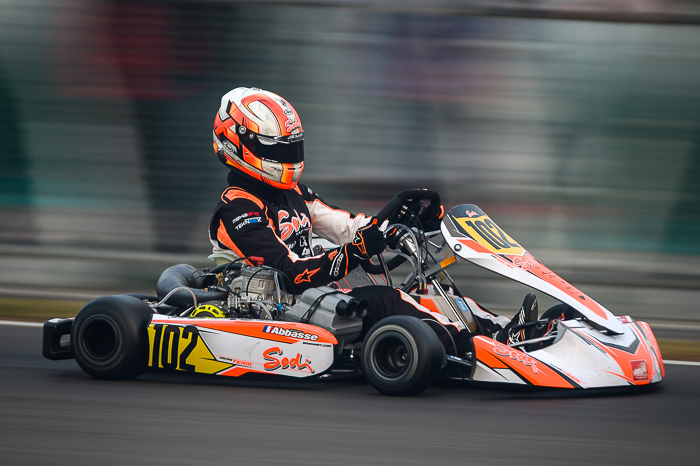 The strong growth of the Sodi chassis in international competition was particularly well illustrated during the 2018 Winter Cup. With its 17 KZ2s, Sodikart was the second best represented brand at Lonato in the advanced category, strong proof of the interest aroused by the performance of the French factory. Anthony Abbasse’s 2nd place and Adrien Renaudin’s top five confirmed the excellent level of the Sodi even though the major classic proved very difficult this year.

The 23rd edition of the Winter Cup took place in cool temperatures before finishing on a slippery track, full of traps and not conducive to overtaking. With 94 participants, the KZ2 category was more competitive than ever before with the presence of the world elite of gearbox karting. The Sodi drivers were not lacking in remarkable performances but the battle raged and penalties fell.

Consistent throughout the weekend in the leading group, Anthony Abbasse won two heats and fought for the Final win by using the dry line surrounded by still wet areas. The Sodi Racing Team driver took the second step of the podium after crossing the finish line just 8 hundredths behind the winner. Constantly in the top 10 and the instigator of several coups, Alex Irlando was delayed by a penalty in the Super Heat and had to give up in the Final after an incident at the start.

A member of the Sodi CPB Sport satellite team, the youngster Adrien Renaudin thrilled his fans by overcoming his 41st place in Qualifying Practice in the heats. In the Final, he completed a tremendous gain of 14 places and returned to the top five in front of the top specialists. Lithuanian Rokas Baciuska was also very fast. Victim of a broken engine in a heat, he took over 10 places in the Final.

Together with TM Racing, OK development continues in the Sodi Racing Team. The performances were in line with current expectations within a large field of 70 drivers. Tom Joyner was close to a top 10 finish when he had to give up in the fight, while Vincent Fraïsse made a 14-place climb up to 15th.