Good Debut for Maranello Kart at the Winter Cup 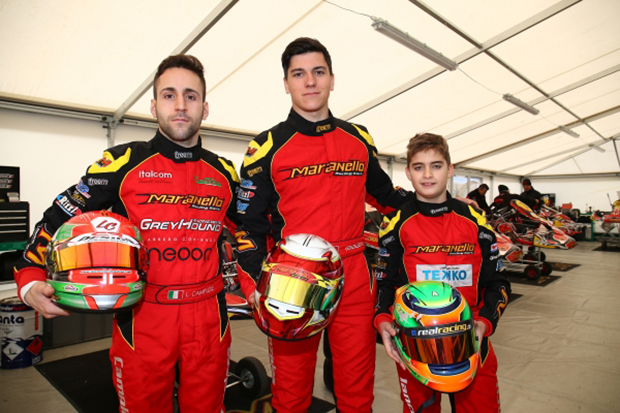 Maranello Kart run a convincing Winter Cup in Lonato, even though Camplese did not end the race due to several penalties in the heats. Positive performance by Gonzales in KZ2 and by Iancu in Mini Rok.

The Winter Cup had a bitter-sweet taste for Maranello Kart. The Racing Team of the Italian outfit put in an overall good performance with its drivers in this International appointment in Lonato, collecting also useful technical information for the remainder of the season.

Class KZ2 had 94 drivers among the most qualified of the world of karting on track and Lorenzo Camplese’s comeback to Maranello Kart has not been very easy. Weather conditions, with intense cold and rain fallen on Saturday, did not make it easy to find the right set up of his Maranello-Tm kart, but several racing contacts and the subsequent penalties handed to Camplese due to the dropped front fairing convinced the Italian driver not to continue on with the final stages, despite being qualified for the Super Heat. This Winter Cup was only a test bench to get acquainted with the new material for Camplese anyway, which has been a positive experience, especially considering the lap times.

Nicolas Gonzales managed to qualify for the Final instead, showing a good crescendo of results recovering from qualifying practice in the heats and Super Heat, when he ended with a great tenth place. Gonzales was eventually 19th in the Final, but run a very positive race with lap times close to those put in by the front runners.

The Dutch official driver of Maranello Holland (TR Motoren) Tim Berndt did also have a good outing, despite he could not qualify for the final stages, while the surprising Uckrainian Ivan Peklin manged to qualify for the Super Heat, but could not earn access to the Final.

In Mini Rok, the Romanian driver Alexandru Iancu has been among the main protagonists of the event. Among the quickest in qualifying, he was fifth of his group, Iancu has also come to the fore in the heats taking the absolute fifth place. A contact in the Super Heat made him lose several precious positions on the Final’s starting grid, but he managed to recover up to the tenth place in the race. The pole Antoni Derebecki of team ST-Racing manged to qualify for the Super Heat but could not get access to the Final instead.