In two weeks time, the new Formula Karting Championship will be making its debut in North American. The goal of this new karting program based in southern California is to provide the opportunity and freedom to karters to race in a variety of classes with minimal restrictions at various locations. The FKC is a traveling series for the racers, by the racers, welcoming everyone to enjoy. An alliance with the well established The F-Series and Le Cont Tires has helped to solidify the 2018 season and the series future within the sport.

“This is a new look at regional racing for the southern California area,” stated Steve Buckner of Formula Karting Championship. “Karting was created in our great state, and continues to be the proving grounds for some of the best our sport has to offer. What has been left behind are those who work 9-5, Monday through Friday, and just want a chance to get that thrill of speed out of their system once a month with a group of fellow racers. Our purpose is to have a safe and fun time. We want to ensure that we provide the best race officiating to our racers, and make sure they all practice good racing etiquette. That is what we are going to provide karters with at the FKC!”

The inaugural Formula Karting Championship has seven events scheduled at five southern California facilities spread out over the months of March through September. The Apex Kart Racing circuit hosts the first ever event at the beginning of March. Willow Springs International Raceway and Buttonwillow Raceway Park are two popular motorsports facilities rich with karting history, set to host the second and third stops for the Formula Karting Championship. The legendary Adams Motorsports Park is one of the oldest facilities in North America, and marks the halfway point for the championship chase. A return to Apex in July precedes the series trip to the Grange Motor Circuit before wrapping up the year at Willow Springs.

The class structure for the Formula Karting Championship is a combination of 10 categories, offering a variety of engine selections and age groups. The breakdown by age and experience is done with three groupings:

Formula A: Racers with the most experience, more advanced class
Formula M: Drivers over the age of 30-years-old
Formula B: Intermediate and rookie drivers

Engines are split up into four categories. TaG 100 is reserved for the newer ‘Touch and Go’ 100cc powerplants, including the Vortex ROK 100 and the IAME KA100. The KPV 100 engine has been a longtime powerplant in the United States, as the 100cc piston port engine continues to claim popularity within the grassroots section of southern California. The Shifter 125 engine grouping brings together different models of six-speed monsters. The Honda CR125, ROK Shifter, ICC and KZ engine models are all excepted at different weights. The same goes for the TaG 125 classes, bringing together four different models in one engine grouping. The X125T, IAME X30, IAME Leopard and Rotax evo are permitted to race. Each have their own specific weight for both the regular and Ironman division, reserved for drivers over the age of 45-years-old. For complete information regarding each class, visit the Classes and Rules section of the FKC website. 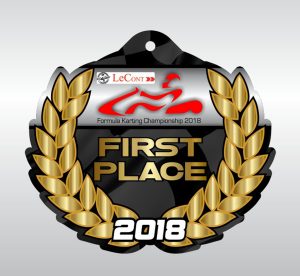 “The shifter and TaG 125 classes have been very successful the past few years at The F-Series on the east coast. We at the Formula Karting Championship are applying that successful concept here in southern California. Add in the great grassroots program working with the KPV and the TaG 100 engines, and we have plenty of options for racers of all backgrounds and budgets.”

Le Cont Tires will be the spec tire for the Formula A categories at each engine group. The Formula B and Formula M categories will be Le Cont or Bridgestone for the TaG 100 and KPV 100, while the Shifter 125 Formula B is open to all brands. VP C12 or a designated pump gas per event is the fuel standards that Formula Karting Championship will follow in 2018.

“The idea is to offer freedom and options to karters,” added Buckner. “Tires will be open to racers in most classes, with the Le Cont brand the spec tire of choice. The non-Formula A classes is more of a casual and recreational groups of racers we want to be with us. Not forcing you to buy this or purchase that, just to get on the track. With the sponsorship from Le Cont and the partnership of The F-Series, the FKC is excited to be part of the karting community in the west coast, and is committed to offer safe and competitive racing to karters of all levels.”

The Formula Karting Championship is offering cash prizes in the Formula A categories at the opening event at Apex, coming up on March 3. Other prizes include custom hats for podium finishers along with Robert Heck Racing swag, $20 tire coupons, FREE Le Cont tires, FREE entries, Pistonbones and Fastech Karting gift certificates.

Pre-registration opened on February 17 at Motorsportsreg.com, with Le Cont tire purchasing information available on the series website. Complete information for the Formula Karting Championship is available at their website formulakartchamp.com. More information, videos and photos can also be found on the Facebook page.