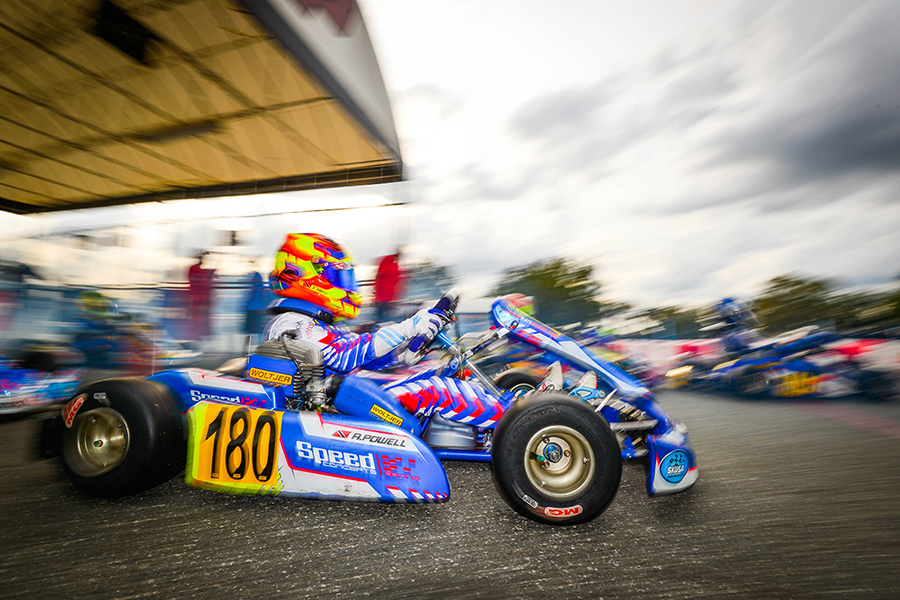 “The Ocala Gran Prix track is one like no other,” explained Mike Speed. “It only has seven corners but is very technical. If you are off by even a tenth of a second, it could mean the difference of fifteen or twenty positions in some classes. We have to push hard for all the time we can get and see where the cards fall in the end.”

Tyler Gonzalez led the SCR Junior quartet by claiming Saturday’s pole position while Kyffin Simpson, Arias Deukmedjian, and Justin Arseneau scored fifth, eighth and 17th place results respectively. In the prefinal, all four drivers would cross the stripe in the top-ten with Gonzalez once again leading the way with his second place finish. Simpson would fall one position to sixth while Deukmedjian would advance one to seventh. Canadian Arseneau drove forward seven positions to finish tenth.

The main event would be one of mixed results for the Orlando based squad as Gonzalez and Simpson would be out early after contact which opened the door for others. Deukmedjian took advantage and seized the opportunity claiming his second consecutive podium result with a strong second place finish while Arseneau would have his X30 Junior career best in ninth.

Gonzalez would return Sunday with a vengeance and circuited the Ocala Gran Prix facility with the second quickest time in qualifying. Driving to the win in the prefinal, Gonzalez would secure a second place podium result in the day’s main event. Deukmedjian would turn his tenth place qualifying effort into a fourth place prefinal result while Arseneau continued his top-ten presence with an eighth place finish. Simpson would unfortunately be involved in a prefinal incident that classified him in 42nd overall, but in the main event drove like a veteran back through the field to finish 20th. Arseneau secured his best result as a junior in sixth while Deukmedjian closed his weekend with a seventh place effort.

Alex Powell would lead the way for the trio of Speed Concepts Racing drivers in the IAME Mini Swift category as he overcame a 16th place qualifying effort on Saturday to stand on the podium with a third place finish. Paul Bocuse showed speed throughout the weekend and ran inside the top-ten on both days but unfortunate incidents in the main events relegated him down the running order. Sunday would see Bocuse drive to the pointy end of the field as he ran in the second position and with the opportunity to take the checkers. Texan Noah Baker improved on his morning qualifying runs on both Saturday and Sunday to move further up the grid, improving his position in both main events from earlier in the day.

Speed added, “I am really proud of our Mini drivers. Alex showed great speed and scored a podium while Paul ran inside the top-ten and looked racy as he battled with the lead group, especially in Sunday’s main event where he drove to the front of the field. Noah continually improved throughout the weekend so I am very confident in these three drivers heading into the Florida Winter Tour event next weekend.”

Back on track this coming weekend, Speed Concepts will see Tyler Gonzalez, Arias Deukmedjian and Kyffin Simpson on the Vortex ROK Junior class as they will be joined by Californian Cole Morgan. In the Mini ROK division, Noah Baker, Paul Bocuse and Alex Powell will round out the seven driver lineup for the final event weekend of three in a row at Ocala Gran Prix.

Official on track action for the Florida Winter Tour will commence this coming Friday before wheel-to-wheel action takes place with two separate race days on Saturday and Sunday. Be sure to follow Speed Concepts Racing on Facebook, Twitter and Instagram for updates throughout the events, and a full race report to follow the event. Find them at ‘Speed Concepts Racing’ or @SCR_Karting.