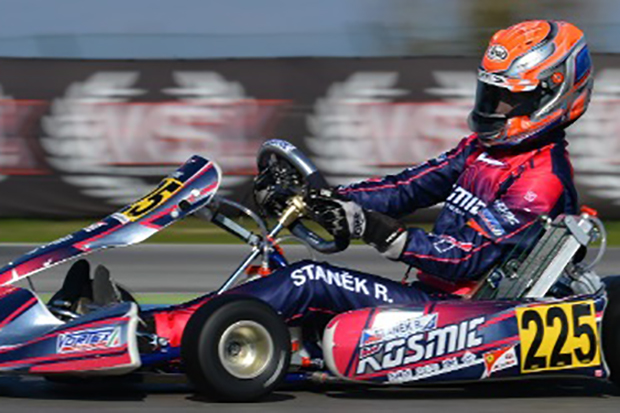 On the occasion of the first round of the WSK Super Master Series, the difficult weather conditions put Kosmic drivers to an extreme test. There were good performances, with several podiums in the heats, a third place in the OK pre-final and, in general, excellent results of the material employed in every situation.

The first stage of the WSK Super Master Series was held at the Adria Karting Raceway, featured by a very variable weather that inevitably affects the whole weekend.
On Saturday, the heavy rain makes qualifying and heats very hard. On Sunday, when the weather is clear, drivers and mechanics have to update the set-ups and re-experience the feeling with the dry asphalt.

In KZ2 the happiest note is the ability of drivers to adapt to changes in the weather and to prove competitive with all conditions. In the end, both Oliver Rasmussen and Axel Bengtsson cannot bring home particularly important results in terms of rankings, but certainly collect a lot of experience and, above all, prove to be able to react to the troubles of a rather complicated weekend.

Good news comes, however, from OK, where Roman Stanek is the protagonist of a good weekend. Seventh in the qualifying heats, the Czech driver is 13th after the heats, where he also wins two third places. A great heat in the pre-final allows him to gain 4 positions and finish third, while in the final he crosses the finish line, conquering the seventh place. A few seconds away we find his teammate Viktor Gustafsson, 12th in the final after a good 7th place in his pre-final.

Finally, in OKJ, very close to the final top ten is David Hadrien. The Frenchman shows excellent skills, with two seconds and a third place in the heats, which make us look forward to the next competitive events with confidence.
Rafael Camara instead, enters the final but lose positions, despite the great work done.

For all Kosmic Racing Department’s drivers the next appointment is at the South Garda Karting in Lonato (Bs), a track in which, before the Round 2 of the WSK Super Master Series (3-4 March), the 23rd Winter Cup is taking place (17-18 February).