Energy Corse Ready to Take Up the Challenges of 2018 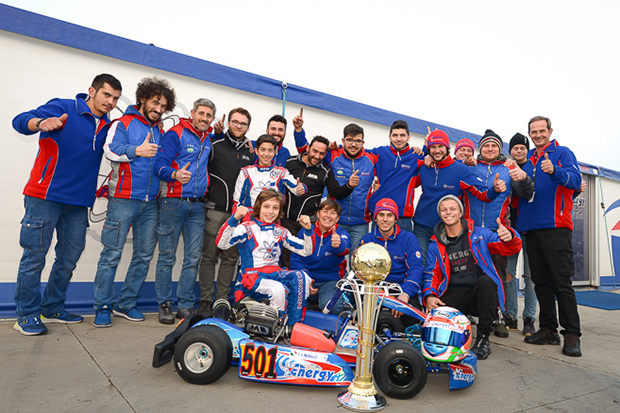 The offseason has been busy at Energy Corse with the CIK-FIA homologation of the new “Space” chassis for the 2018-2020 period and the launch of production. The first tests began in January and racing even resumed before the start of February at Adria. The competitiveness is already there within Mick Panigada’s team with very good performances in the two WSK Promotion events.

Known for many years as an excellent talent developer, Energy Corse has recruited a young Italian leader in his 60 Mini apprenticeship in Andrea Kimi Antonelli, in the tradition of Dorian Boccolacci and Juan Manuel Correa, supported in their time by the Lotus F1 Junior Team under the competition structure of Energy. An early virtuoso noticed by the Mercedes AMG F1 Team, Andrea Kimi embodies the new generation of future champions determined to shine later in motorsport. He has already used all his skill at the service of his new team during the winter tests before being rewarded for his efforts during the WSK Champions Cup at the end of January on the Adria Karting Raceway. After taking pole position, he took three victories in the Qualifying Heats and has won in both the Prefinal and Final to give Energy Corse their first success of the season.

During this event, the Pole Karol Paciewicz of the Team Revolution Motorsport also achieved successes at the wheel of his Energy chassis, in the top three of the heats, then 2nd in his Prefinal. He finished 4th with the fastest lap in the race. The Energy brand was one of the best represented in the 60 Mini category where it placed three chassis in the top 10.

Emil Skaras was on fire in KZ2, 2nd fastest in Qualifying, leader of the heats and winner of the Prefinal. The Final was not as good and he had to settle for 10th place while Australian Joshua Fife was 8th.

A week later, the weather played tricks on the competitors of the first round of the WSK Super Master Series. The grip was constantly changing in the rain on Friday and Saturday, and the return of the sun Sunday changed the game again. The temperatures remained cold throughout the weekend, subjecting the equipment and the drivers to a tough test.

Antonelli only set the 22nd time of the 60 Mini timed practice, but scored three wins in the heats. Victim of an incident on the first lap of the Prefinal, he was unable to qualify despite all his determination and the efficiency of his Energy / TM. Already brilliant the week before, the Australian Marcos Flack had good performances in the heats and returned to 7th in the Prefinal as the first of the four Energy qualifiers.

In OK-Junior, the newcomers continued their discovery of the equipment with various fortunes in these difficult conditions. Only Loris Cabirou reached the Final, Michael Barbaro Paparo and Jamie Dasing their qualification. Uncomfortable after several problems, Emil Skaras was close to the top 10 KZ2, and Isac Skjovist was happy to reach the finish while Joshua Fife gave up in the battle at the very beginning of the race.

As always led by Simone Sorio and Luigina Guerrini, the technical staff continue to work hard to develop in anticipation of weather conditions more in line with the spirit of karting competition. All of Team Energy Corse will be attacking at the next meeting at Lonato, for one of the most famous races of the season, the Winter Cup.

The season begins in America too
Darren White, Team Manager of Energy Corse North America, can be proud of the first results of the year. The Energy drivers shone in Miami (Homestead) in the first round of the SKUSA Winter Series with 2nd place for Connor Zilisch (Felon team) in Mini Swift, and his Palm Beach win in Mini Rok in the first round of the Rok Cup USA. Diego Laroque (Energy Corse North America team) and Alex Powell (Speed Concepts team) completed the success of Energy Corse in 3rd and 4th places. Zilisch and Powell are in the top two places of the Rok Cup USA.