CRG, Hiltbrand and Bortoleto Protagonist of WSK in Adria 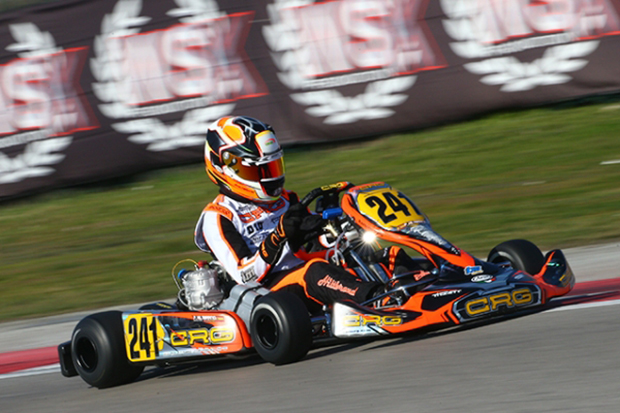 The first round of the WSK Super Master Series at the Adria Karting Raceway has welcomed Pedro Hiltbrand’s comeback to CRG, and he has been shining in OK putting in a good performance. Gabriel Bortoleto also had a solid run in OK-Junior.

CRG Racing Team had a difficult, but very fruitful, weekend during the opener of the WSK Super Master Series held this weekend at the Adria Karting Raceway. The start to this new sporting season gave several interesting indications that will guide the technical development of the material produced by the Italian outfit.

Among CRG drivers, Pedro Hiltbrand and Gabriel Bortoleto have come to the fore respectively in in OK and in OK-Junior, as their team mates, despite the latter having to fight against bad luck. Weather conditions did not help finding the right setup of the karts, as the sun came out only on Sunday after the rain and cold temperatures of the initial part of the weekend.

In OK, Pedro Hiltbrand’s comeback was much awaited and he has been among the quickest absolute since practice on CRG-Tm. He posted the quickest time of his session in qualifying, which was the second absolute. Unfortunately, Hiltbrand was pushed off track by a rival – who in turn had aquaplaned – in the first qualifying heat and this pushed the CRG driver down the ranking of qualifying. Hiltbrand was later on fourth in his Prefinal and went on clinching the sixth place in the Final. The British driver Callum Bradshaw has also been among the best on CRG-Tm. He was ninth in the final classification after recovering 10 places. The Argentine Franco Colapinto and Kilian Meyer experienced some difficulties and ended respectively in 28th and 29th place. Andrea Rosso (CRG-Parilla) had to give up due to a technical problem in the Prefinal when, he was a protagonist of the race. The OK Final went to Hannes Janker.

Pedro Hiltbrand’s comment: “It has been a good comeback to CRG. The best time posted in my qualifying session is quite encouraging. This has not been an easy weekend tough, as I had not been racing for a while before today. I am very happy about the work we are doing at CRG and I am pretty sure the results will arrive. I am positive for the International season.”

In OK-Junior, Gabriel Bortoleto (CRG-Tm) put in a great performance and has been among the quickest for the whole weekend. The young Brazilian of CRG ended the Final in sixth place, but with a little bit more luck on his side he could have secured the podium, as he has occupied P3 several times during the race. Luca Giardelli, Enzo Trulli, and Alfio Spina could not qualify for the Final stages, the latter due to a penalty too much in the heats. The Final was won by Kiril Smal.

The Swede Benjamin Tornqvist of CRG Holland has been the best of CRG drivers in KZ2. He crossed the line of the Final in P10. Filippo Berto run a strong race too and closed his effort in P14, after recovering 6 places, as did Alessandro Giardelli who ended 16th. Emilien Denner (Kalì-Kart) was 25th due to a penalty. The two times World Champion of CRG Paolo De Conto could not take part in the opener of the WSK Master Series in KZ2 because he was busy at a karting event in Mexico. He honoured that event at best, taking the victory. The Final in Adria was won by Alex Irlando instead.

Nicholas Pujatti was the best placed CRG driver in 60 Mini. Team CRG Gamoto’s driver was in fact seventh at the end of a hard-fought race. The victory in this class went to Martinius Stenshorme.