Round #2 victor is set to continue winning ways 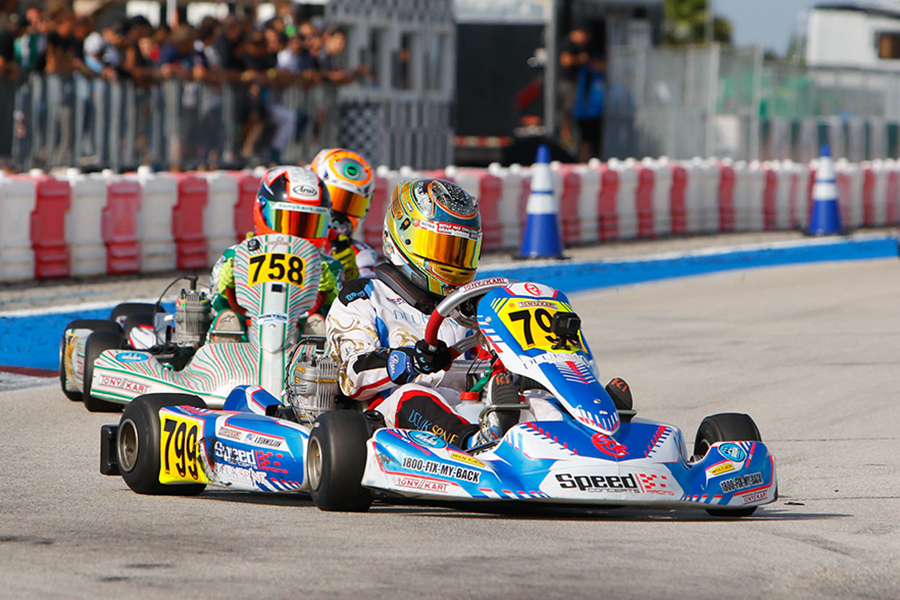 A little less than six weeks ago, Asian American driver Arias Deukmedjian joined Orlando, Florida based Speed Concepts Racing (SCR) and immediately began to add race wins to his resume. Claiming the club race victory at the AMR Homestead-Miami Motorplex in early January, the Merritt Island, Florida resident went on to secure the top step of the podium in round two of the inaugural Superkarts! USA (SKUSA) Winter Series the very next weekend. Now, just over four weeks since he topped the blocks in the southern part of the state, Deukmedjian will head to the Ocala Gran Prix facility in the hopes of continuing his winning ways.

“I really enjoy the environment at Speed Concepts Racing,” explained Deukmedjian, who has family roots in South Korea. “Everybody works as a team, different from what I have been used to in the past when we were racing as an independent. My goal is to drive in the top level of motorsports either in the United States or Europe and I am working towards that goal starting now.”

This past weekend, Deukmedjian took part in the Ocala Gran Prix local race to test for the upcoming national level events. Experimenting with different setups and working on gaining the experience needed to make a run at some more victories, the Tony Kart driver who has raced around the world will now shift his focus to both the Superkarts! USA Winter Series rounds three and four this weekend and then the second round of the ROK Cup Promotions Florida Winter Tour the weekend after.

Deukmedjian continued, “The first three months of the year are very busy in regards to racing. During the three weeks in Ocala, I will turn hundreds and hundreds of laps but I wouldn’t change it. In between the events I will travel back home to keep up with my school work where I currently have a 4.4 GPA and extra curricular activities. A sharp mind and a healthy body go hand in hand and I want to make sure I have both.”

Utilizing an IAME X30 engine platform during the test race this past weekend, Deukmedjian will use the same powerplant for the upcoming SKUSA Winter Series event. Showing great speed in Homestead in early January, the Speed Concepts pilot was one of the fastest drivers on Saturday after being forced to the tail of the field on the opening lap of the main event. Returning Sunday with a vengeance, Deukmedjian stole the show and dominated the main event to take the checkers in a 1-2 finish for the SCR program.

Following the SKUSA event, Deukmedjian will trade his X30 Junior engine for a Vortex ROK package in his quest for more wins in Ocala. Having skipped the first round of the series, the Deuk Spine Institute backed driver is not racing for points, but to build his results portfolio with race wins and podiums.

Official on track action for the SKUSA Winter Series will commence this coming Friday before wheel-to-wheel action takes place with two separate race days on Saturday and Sunday. Be sure to follow Arias Deukmedjian on Facebook, Twitter and Instagram for updates throughout the events, and a full race report to follow the event. Find him at ‘Arias Deukmedjian’ or @A-Deukmedjian.

For more information on Arias Deukmedjian and his racing program, please contact Info@RaceTechDevelopment.com