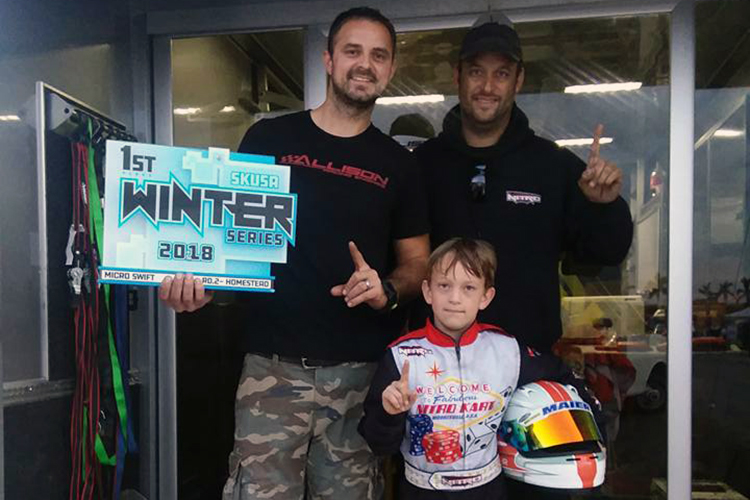 The 2018 season is in full steam, as Allison Racing Engines is calling the state of Florida home for the next few months, working alongside the great customers they support through the multiple events held in the Sunshine State this winter. The season got underway in December with success at the WKA Daytona KartWeek right after the Christmas holiday. That momentum carried over into January, where Allison Racing Engines showed great results at the Superkarts! USA Winter Series and the Rok Cup USA Florida Winter Tour.

The SKUSA Winter Series kicked off at the AMR Homestead-Miami Motorplex presented by MG Tires on January 12-14. Allison Racing Engines was able to secure four podium finishes in the Cadet divisions, including one victory and one pole position. Parker DeLong shined for ARE in the Micro Swift division on Saturday, starting off with fast time in qualifying (52.615). DeLong was shuffled back to third in the Prefinal, and remained in the fight for the victory in the Final. Parker came up just short at the checkered flag, finishing second. Sunday, Ben Maier took the lead role in Micro, going on to score his first SKUSA victory after placing fifth on Saturday. Maier was top-five all day long, coming from third on the grid to score the win by three tenths of a second.

Nearly 50 drivers lined up in the Mini Swift category, with a number of drivers powered by Allison Racing Engines. World title winner Connor Zilisch and Lucas Rodriguez helped to put ARE on the podium on Saturday. Zilisch was just one thousandths short of the victory, settling for the runner-up spot on the podium. Joining him on the top-three steps was Rodriguez, placing a close third.

A week later, Allison Racing Engines set up camp at the Palm Beach Karting facility for the opening round of the Rok Cup USA Florida Winter Tour. The four-day event was a battle to the main events held on Sunday afternoon with ARE powered drivers earning four podium finishes, with two victories. IndyCar driver Robert Wickens made a return to his roots, jumping behind a Rok Shifter entry with ARE power. Wickens set fast time in qualifying (53.930) before winning one of the three heat races. The Canadian won the Prefinal before going on to claim the victory in the Final after a 22-lap battle.

Success continued in the Cadet ranks with Zilisch and DeLong earning podium finishes along with Diego LaRoque. Zilisch qualified seventh overall in Mini Rok, placing inside the top-five in each of his three heat races to earn the pole position for the Prefinal. Connor finished second in the Prefinal, and was involved in a great battle for the feature. On the final lap, at the checkered flag, Zilisch secured the victory by 89 thousandths of a second. Joining him on the podium was another world title winner. LaRoque, making his debut with ARE, was a successful one. The driver from Arizona battled his way from 18th aboard a new kart he had yet to driven, working up to the third place in the Final. DeLong put himself among the contenders in the Micro Rok division, sitting inside the top-five throughout the weekend. Parker finished the event standing second on the podium thanks to Allison Racing Engines power.

“January was a busy time, much more than we have had in the past,” commentd Allison Racing Engines’ owner Brandon Jenkins. “It’s great to have major events like this back-to-back in similar areas, instead of trying to travel across the country. I want to thank all of our customers for their efforts at the SKUSA and Florida Winter Tour events, and I look forward to more success next month.”

Wins are continuing into the month of February for Allison Racing Engines. X30 Senior driver Nic LeDuc scored the victory at the California ProKart Challenge 2018 opener at the Buttonwillow Raceway Park in Buttonwillow, California against a field of 39 drivers. That gives ARE victories at three major events to begin the 2018 season.

Allison Racing Engines is ready for another busy month as February includes two back-to-back weekends involving the SKUSA Winter Series and the Rok Cup USA Florida Winter Tour. Both events are set for the Ocala Gran Prix facility in central Florida, with SKUSA coming on February 9-11 and the FWT event February 15-18. Engine rentals for both IAME X30 and Swift engines are available for the SKUSA event, along with the full line of Rok powerplants for the FWT weekend.

Allison Racing Engines is the engine service center for racers of all levels, including two-time SKUSA Pro Tour champion and eKartingNews.com 2017 Driver of the Year Ryan Norberg and 2017 Rok Cup International Final and SKUSA SuperNationals winner Connor Zilisch. Both go with Allison Racing Engines and so should you for your club, regional and national competitions. Anyone interested in working with the Allison Racing Engines company moving forward are asked to contact Brandon Jenkins via email AllisonRE@yahoo.com or call 317-522-7111. Allison Racing Engines services all major engine brands, including IAME, Vortex, Yamaha, and other 2-cycle engines. Visit www.allisonre.com or find them on Facebook.