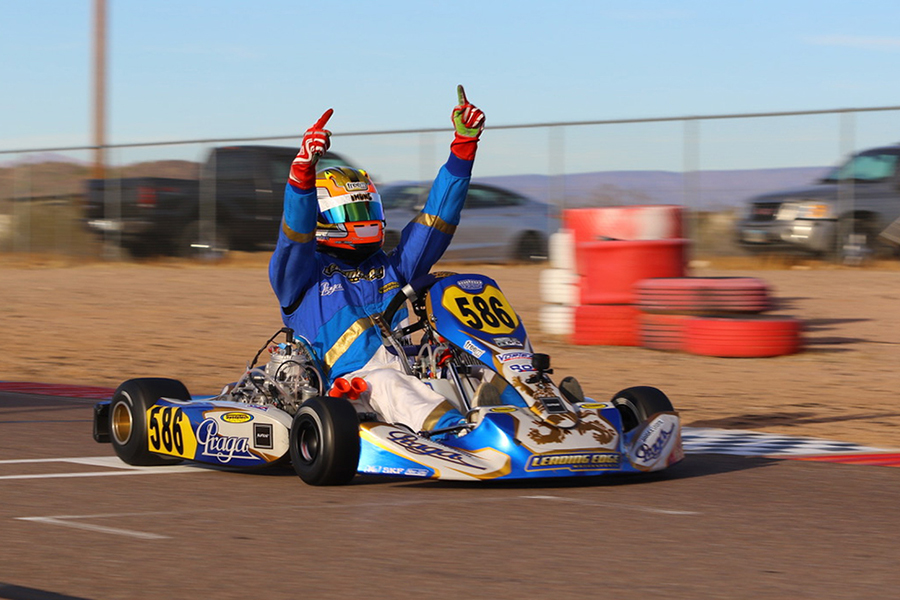 Lodi, California based Leading Edge Motorsports (LEM) kicked off their 2018 racing season in fine form this past weekend at the opening round of the Challenge of the Americas. Taking place at the Formula K Raceway (formerly PKRA) in Phoenix, Arizona, LEM driver Kol Bailey stole the show on Saturday in the Vortex ROK Shifter class as he put Praga, Leading Edge Motorsports and himself on the top step of the podium.

Running quick times in all practice sessions leading up to the weekend, Bailey flexed his muscles on the first wheel-to-wheel event day by claiming the pole position, turning his quickest lap late in the session. Taking the holeshot in the prefinal, Bailey steered his Praga chassis to the win and inside front row starting position for the main event. The same result would continue throughout the day with the Leading Edge Motorsports driver jumping out to the lead early, holding off the advances of fellow competitors before driving away from the field, claiming the victory and sweeping the day by a 4.7 second margin.

“It was great to see Kol and the Praga brand have such a dominating day,” explained Greg Bell. “We have worked very hard in the past calendar year and our hard work is paying off. Kol drove great, the Praga chassis was responsive to changes and we were able to get the win.”

Sunday would see Bailey back near the top of the results board in the second position as he narrowly missed the pole position. Grabbing the holeshot and the lead in the prefinal, Bailey would fall back and maintain the second position. In the main event, the Leading Edge Motorsports driver would once again find himself near the pointy end of the field, but would run out of laps to end the day with his second podium result of the weekend in P2.

Leaving the first weekend as the point leader in the Cameron Karting sponsored Senior ROK Shifter division, Kol Bailey and Leading Edge Motorsports will now shift their focus to round two in the series. Set to take place at Calspeed Karting February 23-25, Bailey will be gunning for more victories as he looks to increase his points lead before the final event weekend in March.

Leading Edge Motorsports is looking for determined drivers to fill space in their championship winning program. Arrive and drive opportunities are available in all classes including X30 Senior, X30 Junior and Mini Swift in both the national and regional levels of SKUSA competition as well as all Vortex ROK divisions at the Challenge of the Americas. With a race winning program and success for years, Leading Edge Motorsports will continue to give their customers the highest attention possible with no more than eight drivers under the team tent.

For more information on Leading Edge Motorsports and opportunities to join the California based team, please contact Greg Bell at LeadingEdgeGuy@sbcglobal.net or visit them online at www.LeadingEdgeMotorsports.com.