CRG: Strong Debut in Adria at the WSK Champions Cup 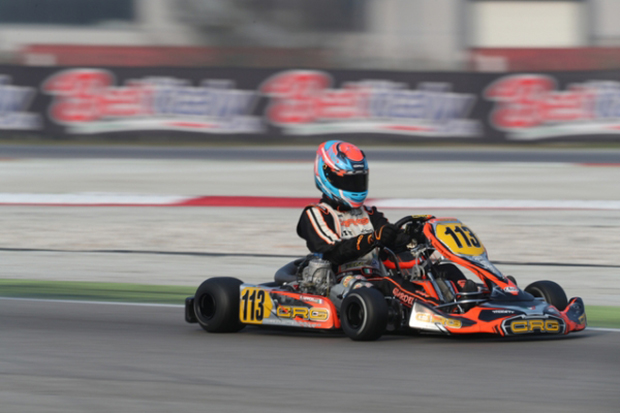 The new CRG Heron chassis in OK and OK-Junior scored good performances with Andrea Rosso behind the wheel of the OK equipment and Gabriel Bortoleto of that of OK-Junior. A round of applause for Alessandro Giardelli in KZ2. CRG on track again next Sunday for the opener of the WSK Super Master Series.

The WSK Champions Cup has opened season 2018 once again at the Adria Karting Raceway on January 28th. CRG has taken this chance to test its new material, especially the new Heron chassis fielded in the OK and OK-Junior grades ahead of the forthcoming campaign.

CRG Racing Team will get into action mainly from next week on still in Adria, the circuit that will house the opener of the WSK Super Master Series, but some important indications have already arrived from this WSK Champions Cup that kicked off season 2018.

Among CRG drivers, Alessandro Giardelli deserved a round of applause on CRG-TM in KZ2. In the heats he has been slowed down by a problem in one qualifying heat, but then bounced back in the Prefinal and Final, climbing up to P5 ending only a tenth short of the podium. Giardelli was third in timing practice being 0.085s off the pace of the Final winner Vasile (DR). A penalty relegated Emilien Dennier to the 18th place on Kalì-Kart, after the eighth time in practice and some good heats. CRG Holland’s Andreas Johansson was 16th at the end of a troubled weekend instead.

In OK, CRG drivers Andrea Rosso, the Argentine Franco Colapinto at the debut with the Italian outfit, and Javier Sagrera on track for team M2 Racing Karts, all on CRG-Parilla run strong races with the new CRG Heron chassis. Rosso has been among the quickest in practice and heats, as he posted the ninth time in practice and the sixth in the heats, before taking P5 in Prefinal, while Colapinto was 15th. Rosso has been one of the main protagonists of the Final and ended fourth after holding also P3, while Colapinto was 22nd. Sagrera had to retire early from the race. The victory went to Nielsen.

In OK-Junior, the new CRG Heron chassis managed by the Brazilian Gabriel Bortoleto has been the quickest on CRG-TM. After the quickest time posted in its practice group and a pole position start in his Prefinal, Bortoleto was fourth in the Final showing great potential, but then he was handed a 10s time penalty that pushed him down to P19. The race was won by Aron. Alfio Spina had a great debut with CRG Racing team taking a good P16 despite a time penalty in what was his first OK-Junior race following a strong career in Mini with team Gamoto. Luca Giardelli was 20th at the end of a good comeback race. The Brazilian Lucas Machado Staico did not have much of luck and could not qualify for the Final.

Some unlucky episodes in 60 Mini did not allow CRG private drivers to qualify for the final stages. They just missed the qualification by a whisker though. The sprint to the line awarded Andrea Antonelli. Better news are awaited in this category for the first round of the WSK Super Master Series next February 4th in Adria. In the occasion, 2016 World Champion Pedro Hiltbrand will officially rejoin CRG Racing Team.