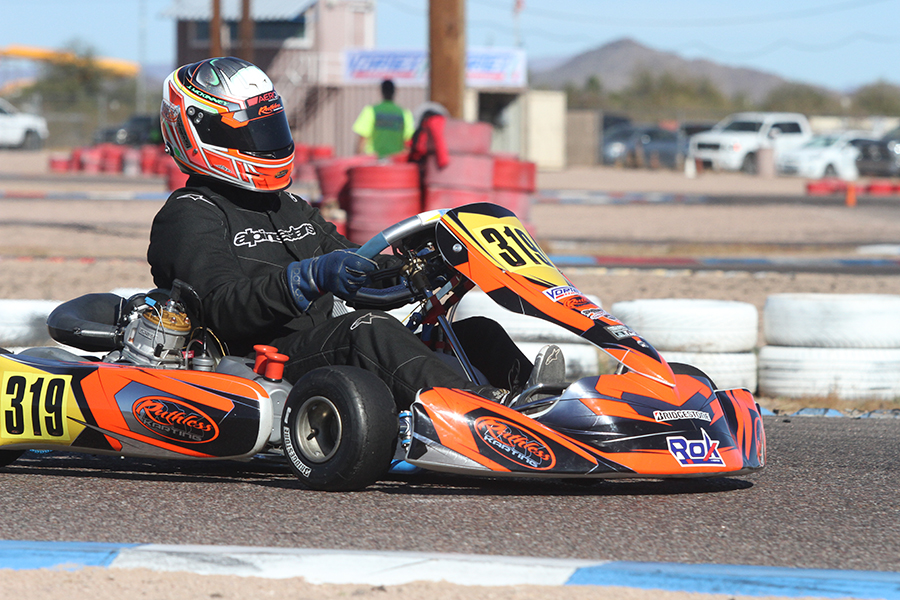 The first event of the 2018 season for the Challenge of the Americas completed at the Phoenix Kart Racing Association facility in Glendale, Arizona on Sunday. Three days of competition for the 84 entries saw competitive racing with no ambulance runs throughout the weekend. The weather was perfect, with increasing temperatures each day. The second round of competition matched the results from Saturday in a few categories, while others stepped up to make Sunday more interesting with new names at the top of the podium as the sun set down behind the Thunderbird mountains.

PKRA driver Jim McKinney was one of four drivers to complete the weekend sweep at the opening event. McKinney dominated Saturday’s action, with Sunday’s full of competition. The FA Kart driver just edged out Colin Neal (Vemme) for the fast time in qualifying with a 46.860, beating him by 81 thousandths. A mix-up at the start allowed McKinney to run away to a three-second advantage with veteran Phil Giebler (Ricciardo) jumping into the second spot late ahead of Neal. Before the green flag waved, Neal’s kart died on the pace lap and was unable to refire, ending his hope of racing for a victory. This made the fight for the lead two drivers with Giebler getting the jump on McKinney to open up the 25-lap Final. The two ran nose to tail until lap 20 when McKinney zoomed by Giebler. The following corners, Giebler struggled to gain speed, and eventually ran out of fuel. This provided McKinney a clear path to complete the weekend sweep with a second victory, establishing himself with the championship lead heading to CalSpeed. Senior rookie Filip Niemkiewicz earned his best COTA finish ever, placing runner-up and giving Kart Republic its first podium in the series. The fight for third went down to the wire with PKRA regular Bailey Murphy (Deadly) edging out Brody Shucard (Kart Republic) for the spot. Jenson Altzman (FA Kart) completed the top-five. 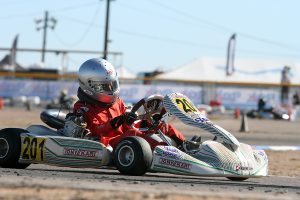 New York driver Ugo Ugochukwu (Tony Kart) stole the show in Junior Rok, dominating the weekend with a complete sweep. Ugo never put a wheel wrong, driving like a machine to clear the field by three tenths of a second in qualifying before pulling out to wins of four seconds and 15 seconds in the Prefinal and Final. The fight all day was for second with the Torgerson brothers Ashton (Tony Kart) and Austin (Tony Kart) able to secure the positions early. Edward Portz (Birel ART) finished on the podium Saturday, however, went off course at the start of the Final. He was 14th on the opening lap, and was able to steal fourth on the final circuit from Bijoy Garg (Exprit).

A weekend sweep was broken up in the Masters Rok division, thanks to Paul Bonilla. The former series champion was able to clear the field in qualifying to stop Saturday winner Adam Kasick (CompKart) from earning the sweep. Bonilla’s 47.681-lap speed carried over into the Prefinal, leading all 17 laps with Kasick able to finish on his bumper with a late charge. Bonilla pulled his Birel ART out to a solid lead early on in the 25-lap with Kasick having to play catch up after the first few laps. By lap 18, Kasick was around Bonilla and began pulling away to a two-second victory. Bonilla settled for second with Erik Jackson (Vemme) repeating as the third place finisher. David Pergande (Tony Kart) drove alone in fourth with Jonathan Silva (CompKart) placing fifth. 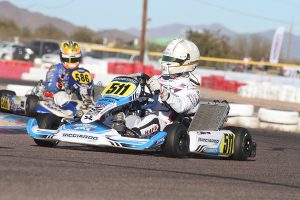 Nicky Hays made Sunday his round, sweeping the day in the Rok Shifter Senior category. Hays (Ricciardo) edged out Saturday winner Kol Bailey (Praga) by just 37 thousandths of a second in qualifying. Bailey grabbed the holeshot in the Prefinal, however, Hays retook the top position and went on to win the race. Hays was able to get off the line first to begin the Final with Alex Keyes (Birel ART) into second ahead of Bailey. Hays would lead all 25 laps to score the victory, tightening up the championship chase heading to CalSpeed. Bailey took back the second spot early, holding the spot to the checkered flag over Keyes. Zach Pettinicchi (Tony Kart) was able to move up to fourth after contact with Jason Campbell (DR Kart) and Enzo Prevost (Aluminos) made contact two corners from the checkered flag, and locked up, unable to continue. That allowed Zach Pettinicchi (Tony Kart) to slide past for fourth with John Nielsen (Tony Kart) into fifth. Nick Firestone (DR Kart) completed the sweep of the Rok Shifter Masters division, leading every circuit of every session. Kalvin Chen (CRG) ran second with Rob Kozakowski (K&K) in third.

Chase Gardner was the driver to beat on Sunday in the Mini Rok division. Gardner (Vemme) was able to edge out PKRA driver Parker DeLong (Benik) by 76 thousandths of a second in qualifying. He and DeLong went back and forth in the Prefinal with Chase able to triumph for the race win. Kai Sorensen (Benik) joined the duo in the Final, mixing up the lead with Gardner during the 18-lap run. Gardner was able to hold the two off on the final circuit, scoring his first COTA victory. Sorensen recorded the fast lap of the race in his run to second with DeLong rounding out the podium. Tuesday Calderwood (Benik) ran fourth, beating Logan Toke (Top Kart) to the checkered flag. Gage Jarvis (Benik) ran uncontested in the Micro Rok division all weekend, taking home two victories in his COTA debut. 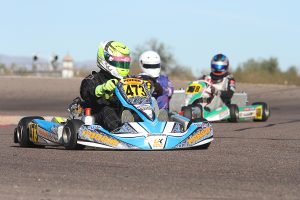 Micah Hendricks (VLR) was able to secure the pole position for the Briggs 206 Senior Final with a runner-up in Heat #3, won by Austin Torgerson (Tony Kart). He started third behind Heat #1 winner Jenson Altzman (FA Kart). They were joined at the front by Bailey Murphy (Deadly) and Jim McKinney (Kosmic) at the front of the field. Nearly everyone took a turn at the lead during the 18-lap Final. Hendricks put himself on the bumper of Murphy late in the race as they ran 1-2. On the final circuit, Hendricks made his move at the kink on the long back straight, securing the lead into the Daytona corner. He held the top spot for the final two laps, securing the victory and the $500 first place prize. Torgerson slipped past Murphy for second with Altzman, earning fast lap of the race, placing fourth ahead of McKinney.

The Briggs 206 Junior division also went down to the wire. Logan Calderwood (Tony Kart) was able to secure the pole position by winning Heat #3 in the morning. Three drivers joined him at the front, including top qualifier Toby Longenecker (VLR), Tyler Ruth (Tony Kart), Ashton Torgerson (Tony Kart) and Tuesday Calderwood (Tony Kart). Calderwood stood strong throughout the 18-lap Final, holding off all charges to go wire-to-wire for the victory. Longenecker drove to second over Tuesday Calderwood with Ruth in fourth. Torgerson was second heading into the final lap, but his attempt at a pass for the win went south, dropping him down to fifth.

The second event of the 2018 Challenge of the Americas is scheduled for February 23-25 at the CalSpeed Karting Center in Fontana, California. Championship chases will be defined in what should be a much bigger event in terms of numbers as the program returns to SoCal.