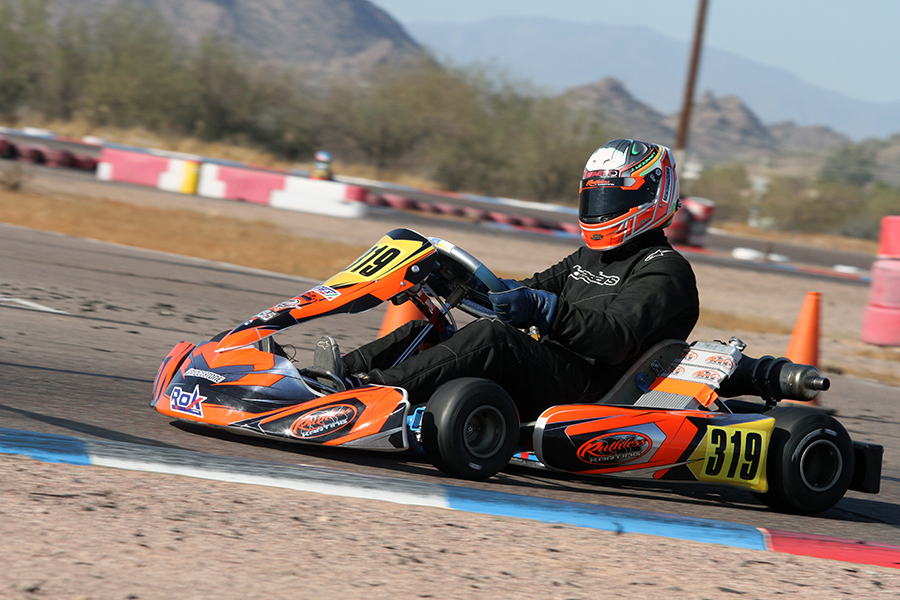 The new era for the Challenge of the Americas is underway now that the opening round of the 2018 season is in the books. The first of three events for the premier winter series on the west coast welcomed over 80 entries to Phoenix, as the Rok Cup USA and Briggs & Stratton divisions competed at the Phoenix Kart Racing Association facility in Glendale, Arizona. The weather was perfect for racing, with clear skies and comfortable temperatures all day long. All seven Rok divisions featured sweeps, establishing the championship leader early, as well as the driver to beat heading into Sunday. The Briggs Senior and Junior classes held two rounds of heat races, shaping up their battle going into tomorrow.

PKRA’s own Jim McKinney (FA Kart) led for almost the entire distance in the Senior Rok division. Setting fast lap in qualifying by two tenths of a second, McKinney led all 17 laps of the Prefinal. Phil Giebler (Ricciardo) worked his way into second in the Prefinal, but a slow start and engine issues put him on the sidelines early in the Final. Ohio’s Colin Neal (Vemme) was able to jump into the lead on the opening circuit, starting from P3. However, McKinney retook the lead on lap two, and never looked back, driving away to six-second advantage. Neal took second in his COTA debut. With Giebler out, the fight was for third early until the group was shuffled up. Antonio de Lis (Tony Kart) jumped at the chance, and scored the position. Filip Niemkiewicz (Kart Republic) drove his way up from back of the field after a Prefinal DQ to end up fourth ahead of Jenson Altzman (FA Kart). 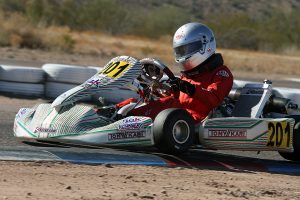 A perfect day was completed by Ugo Ugochukwu (Tony Kart) as the New York driver swept the Junior Rok division. Ugo locked up the top time in qualifying by over three tenths of a second. The Prefinal saw Ugochukwu extend a near six-second advantage over the 17 laps distance, while in the main, Ugo pulled out to a seven-second gap for the victory. The fight was for second between Ethan Ho (Tony Kart) and Edward Portz (Birel ART) went back and forth with Portz coming away with the position. Ho was on the third step of the podium, until a two-position penalty for a start infraction dropped him down to fifth. That moved Carson Mallett (FA Kart) to third with Austin Torgerson (Tony Kart) in fourth.

Kol Bailey (Praga) is another driver from the Phoenix area who dominated in his class, leading wire-to-wire in the Rok Shifter Senior division. Bailey just edged out Alex Keyes (Birel ART) for the fast time in qualifying, stealing the pole on the final laps, as just 12 thousandths separated their lap times. Bailey grabbed the holeshot and drove away to the race win in the Prefinal. It was the same formula in the Final, with Bailey jumping out to a good lead after holding off early pressure from Keyes, before he established a sizeable 4.7-second advantage for the victory. Nicky Hays (Ricciardo) was third, holding off a determined Jason Campbell (DR Kart), who started the weekend in Shifter Master before electing to drop back to the Senior classes to run against the young guns. Enzo Prevost (Aluminos) had a good run to complete the top-five. Nick Firestone (DR Kart) led the entire day in the Rok Shifter Masters division, outrunning Kalvin Chen (CRG) and Rob Kozakowski (K&K). 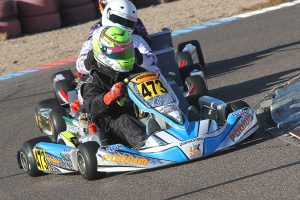 Adam Kasick (CompKart) scored a big win in the Masters Rok division. Kasick stole the fast time in qualifying by 96 thousandths of a second over Erik Jackson (Vemme). Kasick got away in the Prefinal to build a sizable lead and lock in the pole for the 25-lap main. Jackson was joined by former series champion Paul Bonilla (Birel ART) in chasing Kasick, and they kept it close for much of the Final, however, Kasick was too much and led wire-to-wire for the victory. Jackson held on to second over Bonilla to complete the podium, while Reynaldo Nieves (Kart Republic) and Mike Giles (Birel ART) capped the top-five.

There was so much action in the Mini Rok division, that you might have missed that fact that Enzo Swan swept the class. The category was a battle all day, putting on a great show. Swan came out of qualifying with the fast lap in the session to start the Prefinal on the pole position. The Prefinal was a two-driver battle as Kai Sorensen joined Swan at the front. They ran 1-2 all race, with Sorensen crossing the line first, only to have a two-position penalty for a start infraction. This gave Swan the lead and the pole position once again. The first half of the Final saw lots of jostling, but Swan was able to establish himself as the leader after the halfway point. From there, Swan drove away to a two-second advantage for his first series victory. Behind him, lapped traffic and penalties shuffled up the rest of the podium. Sorensen got the worse of it, spinning off course and dropping back to finish sixth in a late race melee that occurred with the chase group encountered slower traffic. Chase Gardner (Vemme) took advantage of the chaos and ended up second. Logan Toke (Top Kart) came away in third, but he was penalized two positions for a starting infraction, thereby promoting Parker DeLong (Benik) to third. Ethan Nascimento (Vemme) ended up fourth with Toke in fifth. Gage Jarvis (Benik) was the lone Micro Rok entry on the day, scoring his first series victory. 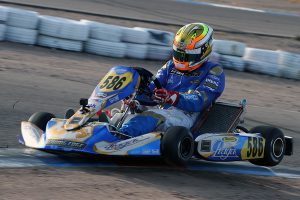 The Briggs 206 Senior and Junior categories were split after qualifying for the remainder of the event. Micah Hendricks (VLR) set the fast time in the Senior class, winning Heat #2 after Jenson Altzman (FA Kart) scored the win in Heat #1. Toby Longenecker gave VLR a second top qualifier award, earning the fast time in Junior. Longenecker won Heat #1 but the field was shuffled up after contact early in Heat #2. This gave Logan Calderwood (Tony Kart) a clear run to the race win. Heat #3 comes tomorrow with the main event to follow.

Follow all the action Sunday throughout the day at www.ekartingnews.com/live for Round 2 of the Challenge of the Americas.