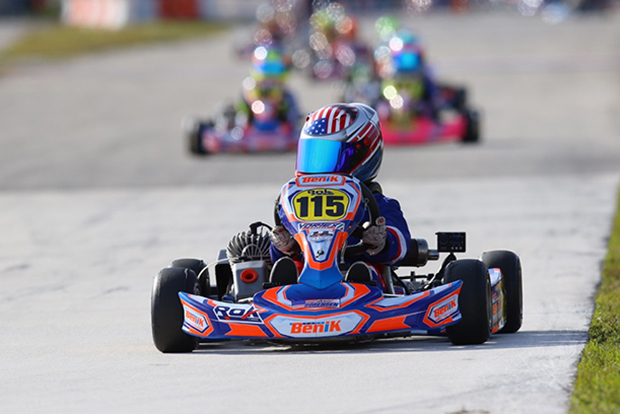 Kai Sorensen would lead the way for BENIK scoring the pole position in the Vortex Mini ROK division at the first round of the Florida Winter Tour (Photo: CKN)

With a new chassis model coming to the North American market for the start of the 2018 season, Team BENIK has continued their success from the previous two years of competition. After scoring race wins at the World Karting Association Manufacturers Cup event in Daytona Beach and the Superkarts! USA (SKUSA) Winter Series at the AMR Homestead-Miami Motorplex in Homestead, Florida, the popular blue chassis showed speed at the opening event of the prestigious ROK Cup Promotions Florida Winter Tour.

“We are continuing to run at the front of the field and the 2018 BENIK has proven to be successful,” explained Nick Mitchell, Co-Owner of BENIK Kart. “Our chassis has shown the speed on multiple different tire brands, including Envico and Bridgestone, and in different weather and track conditions. We are really happy with the development and are excited about the rest of the season.”

Throughout practice, Team BENIK drivers were often clocked as some of the quickest drivers on the fast and flowing Palm Beach Karting facility. During the official qualifying session, the 2018 BENIK proved its speed qualifying five drivers in the top-eight positions. Kai Sorensen would lead the way scoring the pole position while Carson Morgan, Mateo Rubio Luengo, Andersen Leonard and Miguel Costa followed closely in second, fourth, sixth and eighth respectively.

Scoring fast lap honors in several of the heat races, BENIK Kart drivers flexed their muscles as they continued their domination at the pointy end of the field. When the final checkered flag had flown, Carson Morgan would be the top BENIK driver scoring a podium result with a second place finish after leading several laps including the penultimate lap of Sunday’s main event.

Mitchell continued, “Though we did not come home with the race win, I think we can safely say the 2018 edition of the BENIK chassis is as good or better than last year’s.”

For more information on BENIK , please contact Nick Mitchell or Ben Cruttenden via e-mail to Info@Benik-Kart.com or by phone at 754.206.4870.