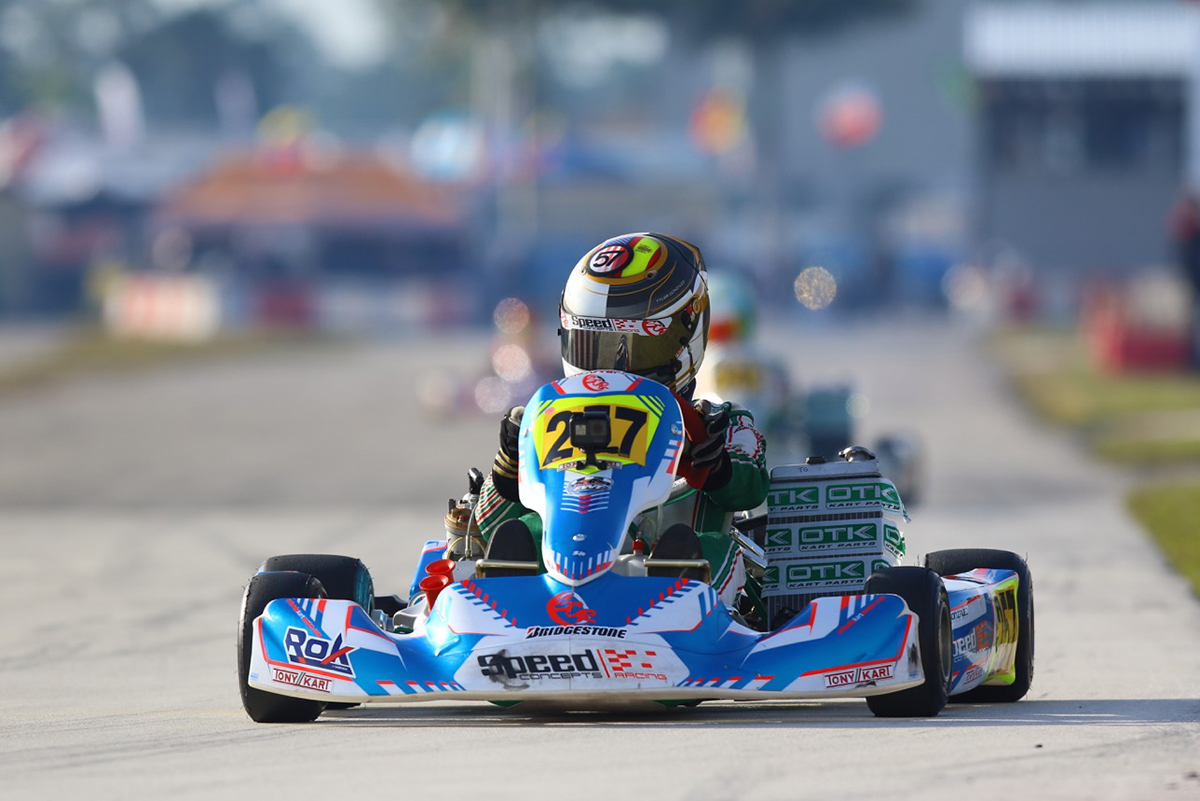 Add another win to the Speed Concepts Racing 2018 season total as Tyler Gonzalez stood atop the blocks this weekend at Palm Beach Karting. Competing at the opening round of the ROK Cup Promotions Florida Winter Tour, Gonzalez bided his time throughout the weekend and took advantage of his race craft in the main event to steal the victory and leave the opening round of the series as the point leader.

Qualifying in the third position on Friday afternoon, Gonzalez and his Speed Concepts Racing prepared Tony Kart went third, third and second in his heat races to start the prefinal from outside the front row. Claiming another second place result in the prefinal, the Speed Concepts Racing driver would steal the show in the main event to breakout to a lead and claim the checkers.

“We didn’t have the speed as some others throughout the weekend but we kept working hard,” explained Mike Speed. “I was confident that Tyler could use his abilities and get to the front and I am happy for him. It was a great drive.”

Cole Morgan and Kyffin Simpson joined Gonzalez in the ROK Junior division, both entering the event as rookies in the class. Simpson impressed all with his 13th place qualifying effort, showing the necessary speed to run at the front of the field. Californian Cole Morgan had some bad luck in heat race one, but rebounded well in heats two and three to finish in the front half of the talented field of Junior competitors.

Sunday would be a much better day for the two Speed Concepts rookies as Kyffin Simpson improved in the prefinal to garner a better starting position for the main event. Involved in an incident early, Simpson kept his head in the game and continued to show constant improvement, driving all the forward to a 17th place finish. Morgan finished his Florida Winter Tour debut very strong by gaining 17 positions in the main event and ended his weekend in 13th.  Both drivers will look to continue their progress next round.

Alex Powell led the Speed Concepts trio in the Vortex Mini ROK class as his third place qualifying effort turned into three top-ten heat race results. Holding station in heat one to finish third, Powell took the win in heat two before falling back to ninth in heat three. Starting the prefinal in third, Powell once again worked his way to the front of the field and took the win and pole position for the main event. With some fierce wheel-to-wheel battling up front, Powell would fall outside the top-five before driving back forward to narrowly miss the podium in the fourth position.

Noah Baker showed consistency in the Mini Swift heat race flight format as he hovered just around the top-ten but showed top-five pace. A 16th place finish in the prefinal was negated by an on track incident in the main event that forced him to retire. Paul Bocuse’s turned his qualifying run into a solid set of heats where he drove into the top-ten twice to finish eighth and third in heats one and two and added a 12th place result in heat three. Continuing his move forward, Bocuse ended his weekend with the speed needed to secure a solid top-ten result in the tenth position.

Speed Concepts Racing will now begin their preparations for the third and fourth rounds of the Superkarts! USA Winter Series. Taking place February 8-11 at the Ocala Gran Prix facility, the Orlando based team will look to continue their success.