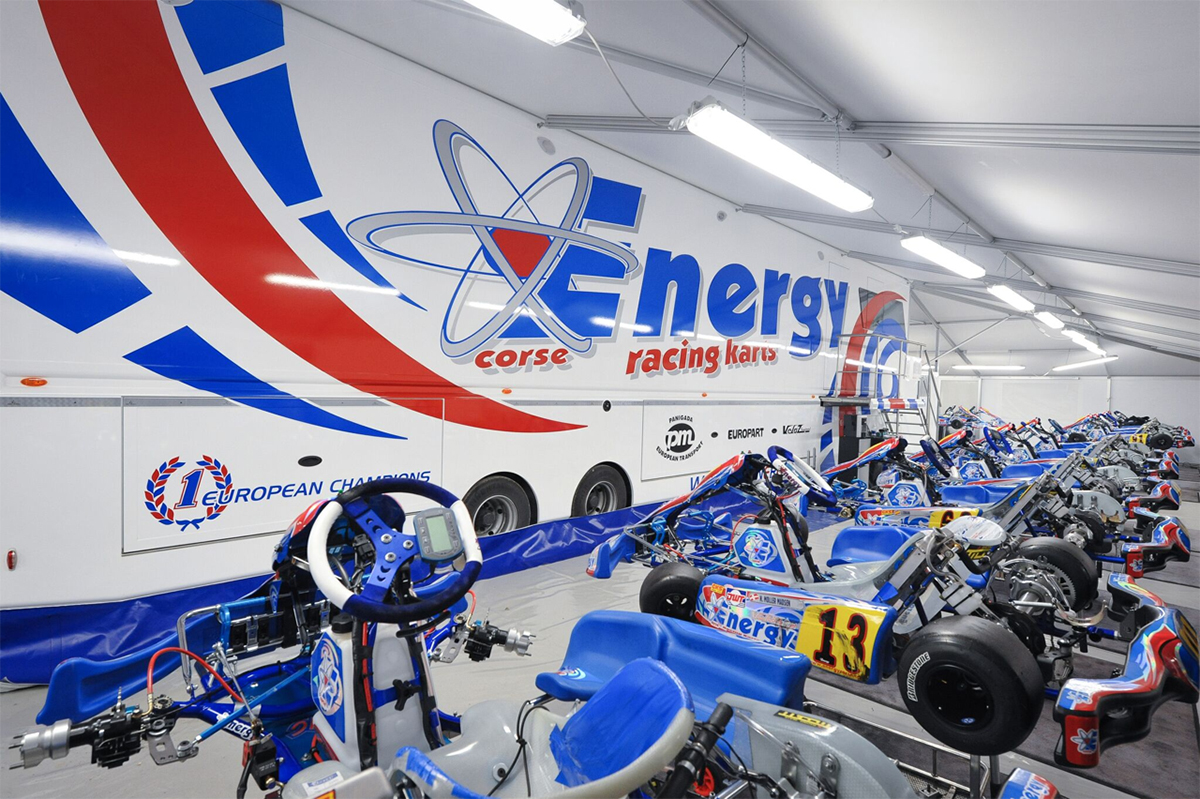 Jak Crawford is having an Energy Corse European reunion in 2018.  The upstart 12-year-old Junior driver has inked a deal with Mick Panigada’s Bergamo, Italy based Energy Corse factory race team. Beginning the last week in February, the young and talented Crawford will train and compete in select WSK Karting events as well as the full Germany Karting Championship (DKM) series and the full CIK-FIA European Junior calendar.

In 2015 Crawford was introduced to Energy Kart’s Mick Panigada and the Energy Storm cadet chassis by Seth Nash of Nash Motorsportz. In his first test event at a California Pro Kart Challenge race, Crawford won, and he won again a few weeks later at the Superkarts! USA (SKUSA) Pro Tour in Phoenix, Arizona. At that time, Crawford was the only driver piloting the Energy Storm cadet chassis on the national level in the United States. Now, a few years later and Energy’s cadet success in the North American market is rapidly expanding with many of the highest-quality racers fielding the elite karting brand.

“Jak helped us grow our cadet brand in the United States,” expressed Panigada. “We have been trying to get Jak back to Energy Corse because he is an especially talented driver. He focused his first year of Junior racing in the USA and is now a proven racer in a full-size kart. We look forward to having him compete under our banner in Europe.”

The full-size Energy Space is expected to be fast in Europe in 2018 after continual OKJ platform refinements in 2017 while Crawford looks forward to joining both his old and new Energy Corse teammates and friends in Italy.

Panigada continued, “I watched Jak drive at the SKUSA SuperNationals in Las Vegas and he impressed me all over again. More than just a fast driver, he won by driving smart and knowing how to win.  We are excited he is back with our Energy brand and are confident in our future successes together.”

For the months of January and February, Jak will race his Legends Car on the East Coast before transitioning back to kart training for a few weeks at Speedsportz Racing Park and with the Alan Rudolph Racing Academy just outside of Houston, Texas. Crawford will then head to Europe until late September competing in some of the world’s most competitive karting events.

While in Europe, Jak will once again be teamed with his former Energy Corse super-mechanic Simone Sorio. Simone and Crawford will work together for all European karting events in 2018, including three CIK-FIA Academy Trophy races where Jak will represent the United States.

“I want to thank my parents for letting me do this,” explained Jak. “They really want me racing in the States and we had a great 2018 race plan but once Mick made the offer, I wanted to compete in Europe with Energy. It will be a big challenge with school and missing all the things at home but I am ready to race.  I also want to thank Seth Nash for teaching me so much and introducing me to Mick. Chris Freckleton and so many other people too.  I want to thank Holy Trinity Episcopal School too.”

When Crawford is stateside again in October he will continue Legends Car racing. Jak began in these fast and feisty little cars in May of 2017 and found quick success including wins, a third place at Oval Nationals and a championship at the Road Course World Finals.

Then in November, Crawford looks forward to climbing back in a kart and racing the SKUSA XXII SuperNationals at the Rio in Las Vegas with Nash Motorsportz while defending his impressive rookie Junior X30 race win from 2017.