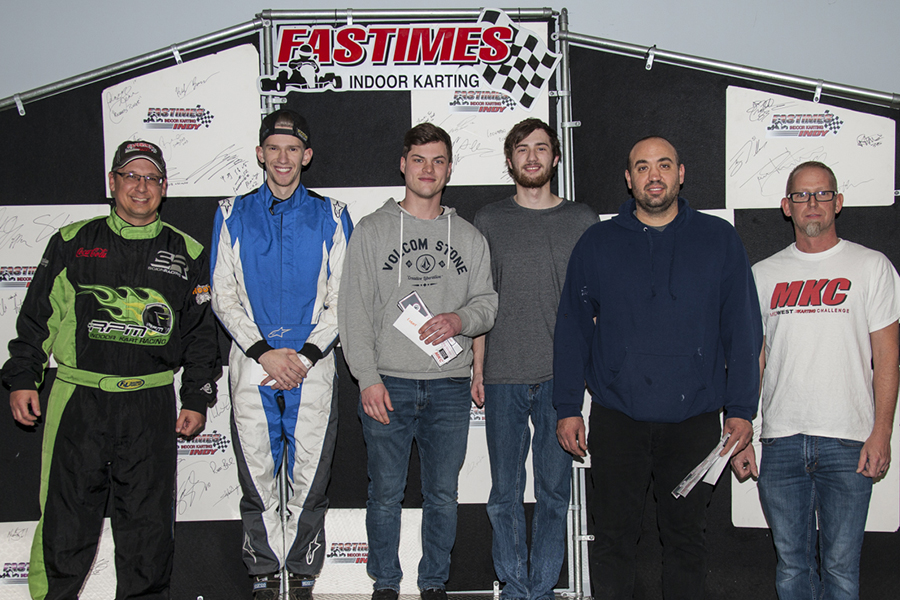 Indianapolis, Indiana is known for racing and the Indianapolis 500. On January 7th, it was all about indoor karting! The Midwest Karting Challenge rolled into town to take on the historic, multi-level Fastimes Indoor Karting. The facility has seen some of the best racecar drivers on the planet over the years and it’s easy to see why. The challenging track is fast and demands precision from its competitors at all times, easily making it one of the top indoor karting destinations in the country.

Racing started off with the Werner Motorsports Medium division as 17 drivers took their first run on the cold surface. It was apparent from the start that this group would be fun to watch. 8 drivers ended their first run within 3 tenths of each other with 206 Pro kart racer, Tom Harleman (IN) leading the way with a 24.528. On his heels was Jordan Halloway (IN) with a 24.862 and Pro kart racer, Zak Rinker (IL) with a 25.062.

Run 2 really saw business start to pick up! The track started to come in from the recent repave and times started dropping across the board. Tom Harleman again lead the way setting a blistering time of 24.262. David Quillen (IN) joined the guys in the 24 second bracket with a 24.782 to put himself solidly in the mix. Justin McCarthy (IN) put himself in the top 5 with a 24.736 and TJ Hollingsworth (IN) was right there with a 24.768. Tim Huss (WI) clocked in a nice 24.821 to round out your top 5 after run 2.

With a good amount of rubber down by run 3, drivers were finding their groove. Times were faster and the gap was narrowing for the top 5.  Tom Harleman continued to show the way by lowering his already fast time to a staggering 24.125 and locking up the Medium Class victory. David Quillen brought his A-game in run 3 with a 24.450 taking home 2nd in class and Jordan Halloway rounding out your medium podium with a 24.587.

The D&D/ Obskure Racing Heavy Division only saw 5 drivers this past race but that didn’t mean it would be short on intrigue.  Jason Jeanette (IN) lead the way early, clocking in a blistering 24.812. That was good for a .3 advantage over John Edsell’s (IN) 25.154 and good for 5 tenths over class series points leader and Spec Miata driver, Dan Goff’s (IL) 25.389.

Run 2 saw the field get tighter as Jeanette couldn’t lower his time but the others did. Edsell went 25.061 and under the weather, Mid-West Tour Super Late Model driver, DJ Weltmeyer (IN) snuck in to the 3rd spot with a 25.258.

The final run was awesome to watch! Dan Goff put up a top 3 time by lap 6 and Jeanette looked to be struggling with his kart, barely cracking a 25.2 halfway through the run. He silenced all that on lap 9. He gathered himself up a put down a jaw dropping class low 24.590. Weltmeyer gave everyone a reason to keep watching when he ripped off a 25.114 late in the going but it would only be good for P2 as Jeanette takes the win in Heavy. His time would have gotten him a podium in the medium class! Nice lap, Jason.

The ChiTown Karting Light Division was the class to watch in Indy. 33 drivers weighed in under 199lbs to take on the challenging conditions. It was clear from the start that they were all chasing one man, Wes Melusek. Melusek (IN) ripped off a time of 24.299 in Run 1, to better his closest class competitor, Cole Kinsler’s (IN) 24.534 by .23 and best RedBull Kart Fight finalist, Matthew Gruenholz’s (IN) 24.567

Run 2 would see more of the same at the P1 spot, Melusek lowered his already blistering time to a 24.120 but Gruenholtz and Kinsler would come under fire. Overall series points leader and Big 8 Late Model driver, Tyler Brown (IL) seemingly came out of nowhere and put down the second fastest time of the day with a 24.231. Concept Haulers Motor Speedway’s Jr 206 track Champion, Jacob Bolen (IL) slotted himself into P3 with a nice 24.521, dropping Gruenholz to P4 in class.

The last run for the light division before the bonus round was the most anticipated all day. It would see 5 of the 6 fastest lap times go up against each other and with the most grip all day, you just knew it would be close!  The first group to go out couldn’t make a move into the top 5 but Gus Morzel (IL) showed that there was more speed in the track when he laid down the 6th fastest time in class with a 24.489. The next group saw Sprint Car driver, Derek Crane (IL) jump up to the top 5 with a 24.310 and 206 pilot, Chris Rossiter (IL) lay down a 24.424. At this point, we’re all thinking the next group will be something special to watch.  Melusek, Brown, and Atkins hit the track and traded blows for the first ¾ of the run. No one really flirting with the top time until extremely late. On lap 16/18, Sam Atkins (IN) put in a lap good enough for P3 in class and P4 overall with a 24.249 and the very next lap, Tyler Brown went P2 in class and P3 overall with a 24.216. Melusek had dropped off the pace but at that point it didn’t matter. He had done enough to lock up the class win!

The Fast 5 Shootout was developed to create incentive to attend traveling races, allow a little forgiveness to those that can’t make an event, and reward excellence & consistency.

The points structure is as follows:

Down to 5pt then all drivers receive 5 after that.

The Fast 5 began with 33 drivers buying back in for one more chance at moving up. We tried to separate the 5 fastest karts and give every driver a “fair chance in equal equipment” It was a very new concept and we missed on number of laps for the top 5 but the numbers don’t lie, P7-P14 all set PB times in the bonus round but only one driver was able to capitalize and take a top 5 spot away. Cole Kinsler ripped off a 24.304 to take 5th away from Derek Crane by only .006! When we get this format perfected, it will make the series points structure the best in racing in our opinion.

Congratulations to all our podium finishers and we hope to see you in Milwaukee for Championship Weekend!

Raceday registration starts at 10am.