50%-win rate between WKA and SKUSA events in Florida

Exploding on to the karting scene last year, Nitro Kart has started the 2018 season the same way they ending 2017, winning! Taking to the track at the World Karting Association (WKA) Manufacturers Cup event at the Daytona International Speedway and then at the newly revamped AMR Homestead-Miami Motorplex for some Superkarts! USA (SKUSA) Winter Series competition, Nitro Kart has won 50% of all the races available in the Micro and Mini ranks after the two national level events. 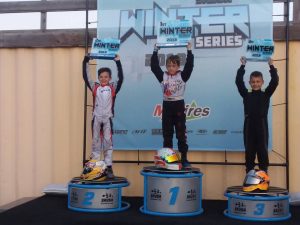 “It has been a tremendous start to the 2018 season but we will not slow down,” explained Nitro Kart’s Nick Tucker. “When you do as well as we have been, the target is firmly on our brand and we need to continue to push hard to stay ahead of the competition.”

Nitro Kart has won half of all IAME Micro and/or Mini Swift class pole positions and race wins. Racking up nine podium finishes in the first two events of 2018, Nitro Kart has their goals set high for the remainder of the season.

Tucker added, “I definitely need to thank all of our drivers and their families for their hard work and support. A huge thank you to all team mechanics, driver coaches and dealers as well for helping make the Nitro Kart the best Cadet chassis in the country.”

At the WKA event in Daytona, Brent Crews would stand on the podium twice in the Mini Swift class, once as the race winner while Ben Maier would score a double victory in the Micro Swift ranks. Adam Brickley would join Maier on the podium after both main events providing Nitro Kart four of their nine podium results. Bryce Sanders also showed speed in Micro Swift taking one pole position on the weekend.

In SKUSA competition, Brent Crews and Ben Maier were back on the podium yet again. Crews would score a pole position and podium result in the Mini Swift division while Maier would add another win to his 2018 total in Micro Swift. Parker Delong would run with Maier all weekend long scoring the Micro Swift pole position and one podium on the weekend.

Nitro Kart has strengthened their relationship with Parolin as the brand’s manufacturer as of late and has a closer working relationship than ever. Look for continued innovation and success from this race winning partnership.

For more information on Team Nitro Kart or the Nitro Kart product line, please visit them online at www.nitro-kart.com or contact Nick Tucker at 704.818.7868 or via e-mail to mwracer70@aol.com.