CRG Renewed a Block of 11 Drivers 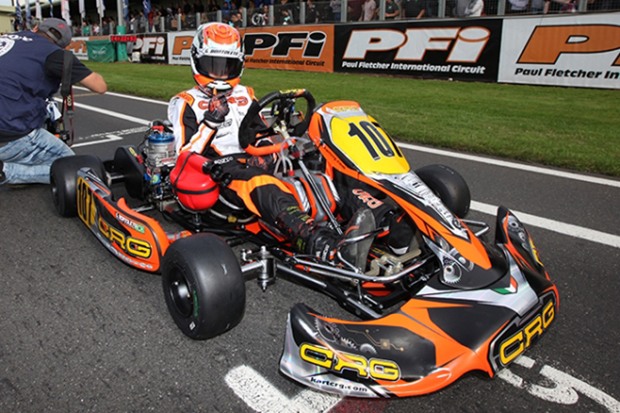 The CRG Racing Team confirmed Gabriel Bortoleto and Luca Giardelli in the OK Junior, Callum Bradshaw, Kilian Meyer, Ayrton Fontecha and Andrea Rosso in the OK, Alessandro Giardelli, Enrico Prosperi, Filippo Berto and Marco Valenti in KZ2 also for 2018. Moreover, there is the World Champion Paolo De Conto that will still be racing in KZ and Emilien Denner that will race with the Kalì Kart colours in KZ2.

The CRG’s 2018 start is characterized by continuity with the past season, as the Italian factory made official a block of 11 drivers committed in the international categories already since last year.

It is a strategic choice, useful to continue the work for technical development in the best way, a functional work not only to obtain the best results on the track, but also to convey the know-how from racing to the serial production.

Stability has always been one of CRG’s strong points also concerning the drivers training and it’s no coincidence that today’s most important F1 drivers were ‘home-grown’ by the Italian factory.

Together with the confirmed Paolo De Conto, that will get a shot at the most important titles in KZ again, the CRG management worked to confirm at least 2 drivers from 2017 for each category, together with the newcomers, as the announced return of Pedro Hiltbrand and the young Enzo Trulli.

Further new drivers will be announced in the following weeks, reaching over 20 drivers with a CRG contract for the 2018 season, a high number for a competitive and ambitious formation in all the international categories.

On this basis, the renewal of 11 contracts has been made official: in OK Junior for the Brazilian Gabriel Bortoleto and Luca Giardelli; in the OK the Spanish driver Ayrton Fontecha was promoted from the Junior class, whilst his compatriot Kilian Meyer and the British Callum Bradshaw were confirmed, as well as Andrea Rosso, who made his debut with CRG in the last races of 2017.

In the KZ2 class, Alessandro Giardelli, Filippo Berto, Enrico Prosperi and Marco Valenti were confirmed, together with the French Emilien Denner with the Kalì Kart colours.

For what concerns the engine partnerships, CRG confirmed the winning collaboration with TM Racing for the KZ classes, whilst in the next days, at the end of winter tests, the agreements for the OK-OKJ categories will be defined as well.

About the racing calendar, the main focus of the CRG Racing Team will be the CIK-FIA championships (European and World Championships), besides complementary programs in the DKM and the main WSK meetings.

In the end, there is a continuity also for what concerns the technical personnel, with Glenn Keyart as team manager, assisted by Arnaud Kozlinski and Mariano De Faveri, besides the engineer Marco Urbinati for the data collection.