New 2018 Benik Kart Proves to be Successful in First Event 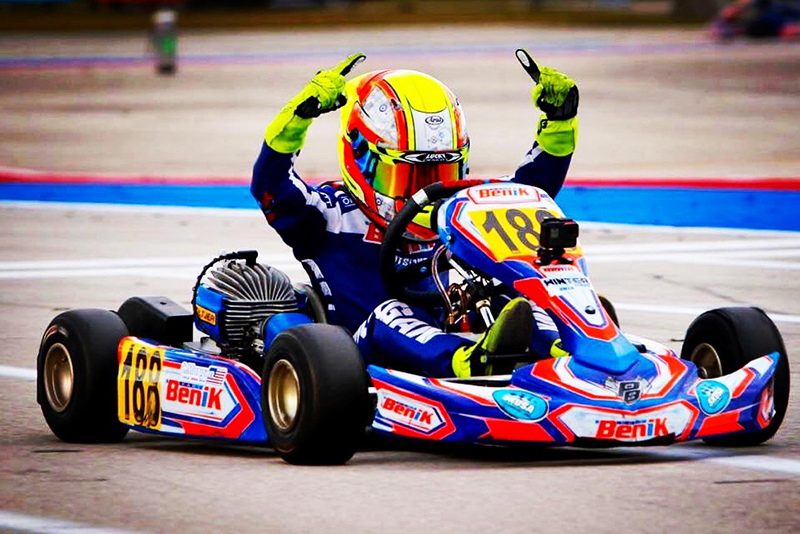 Competing at the newly named and renovated AMR Homestead-Miami Motorplex for the opening round of the Superkarts! USA (SKUSA) Winter Series, Team BENIK was back in form following a tremendous 2017 campaign. With a brand new BENIK design produced by a different manufacturer, the results remained the same for the Florida based team as they kicked off their 2018 racing season.

“We knew our new chassis would be good, but it was nice to confirm that in competition,” explained Nick Mitchell. “We really hit the sweet spot of the kart come race time and proved the speed of the new BENIK chassis. With extensive testing in the months leading up to the first event of the season, we hit the ground running in Homestead and will carry that momentum forward this week to the Florida Winter Tour event at Palm Beach Karting.”

In the IAME Micro Swift class, Max Garcia, aboard a BENIK chassis with the Kart Sport North America program, claimed the victory in Saturday’s main event to add to the company’s win total. Sunday would see the talented youngster take his BENIK chassis to the top of the time charts in qualifying and he and kept his pace at the front of the field throughout the prefinal to finish second.

Fifty strong drivers would enter the IAME Mini Swift class with two BENIK drivers scoring top-five results at the end of Saturday after another claimed the pole position earlier that morning. Mateo Rubio Luengo took the honors during Saturday’s timed session and looked good in the prefinal as he battled for the lead, scoring the fastest race lap, but was unfortunately involved in an incident and forced to the sidelines.

Lucas Rodriguez would cross the stripe in third and 2017 Superkarts! USA Pro Tour Champion Carson Morgan came home fourth with fast lap honors, both aboard the new 2018 BENIK. Sunday would see Morgan better his results on Saturday, as the talented youngster drove his BENIK to the front of the field and never looked back. Taking the prefinal win and main event victory, Morgan celebrated on the podium later that day.

Mitchell continued, “We have no time off as we are back on track this weekend for the Florida Winter Tour at Palm Beach Karting. I am confident that we can better our results from this past weekend and will be working hard to do so.”

For more information on BENIK, please contact Nick Mitchell or Ben Cruttenden via e-mail to Info@Benik-Kart.com or by phone at 754.206.4870.