A Year in Review: Nick d’Orlando 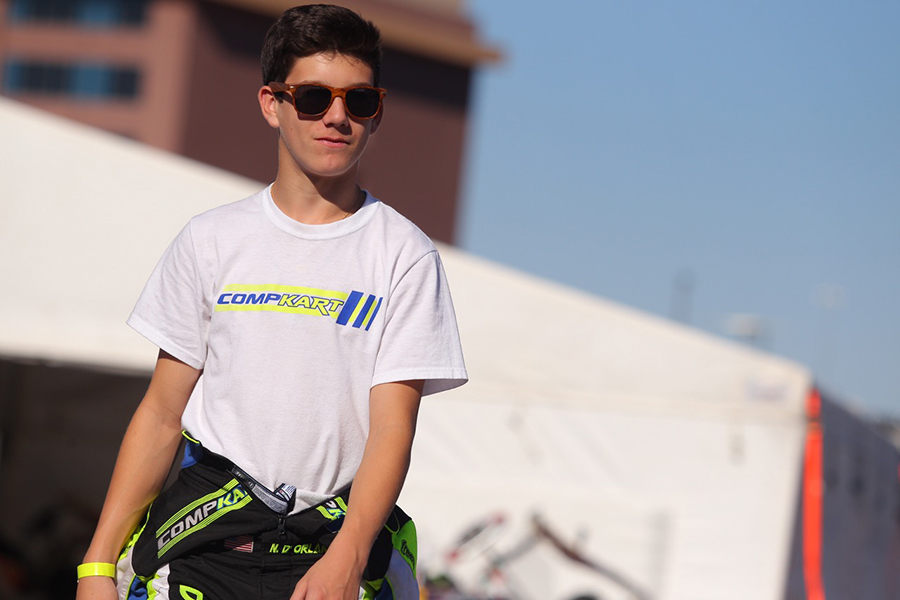 To start off the new year, the drivers at d’Orlando Enterprises have submitted their own Year in Review of 2017, in lieu of a typical press release. Enjoy the read and Happy New Year!

2017 started out for me, Nick d’Orlando, at the Florida Winter Tour Rok Cup series, in the Rok Junior class, with my team of J3 Competition on the CompKart chassis. The tour didn’t go as planned but we made the right decision that it was time to move to some European racing.  This would be my first time competing in Europe, and also a first for J3 in the WSK & CIK-FIA series. But it wasn’t an easy adjustment since I was coming from US competition as one of the oldest and biggest drivers in the Junior classes, to now be racing at the highest level in the world as one of the youngest & least experienced drivers in the OK Senior class.

My experience at the WSK & CIK-FIA series really enlightened me on the difference of US competition vs European competition. Drop-down bumpers, for example, were not really my friend at first.  But I was excited to take the year competing in Europe to learn and grow to be as good as I can be for my future and I was very happy to earn the chance to race in some of the main events at this level, as that is an accomplishment alone.

I learned more than just how to be a better kart driver. For example, I’ve learned that the food in Italy is amazing! OMG the food, the food and more food… what we call, the ‘meat sweats’!! Go ahead and Google that.  The travel to Alaharma, Finland is long but the scenery is beautiful and Norwegian Airlines has the best planes (in my opinion). But when I go back, I’m definitely not going to miss out on taking a ride on that massive roller coaster that the race track is next to. I also learned, if you miss your ride in the morning, taxis aren’t always easy to find in some of these areas and it could be a very long walk to the track. Sweden is a beautiful country with fabulous fresh seafood, cool small towns and an awesome race track – even though my equipment didn’t hold up for me to actually finish the main event. I also learned that England can be really cold in August! And I witnessed personally how hard it is to be driving the wrong way on the roads … tires don’t like hitting curbs and you should see the look on people’s faces when you make a right turn into oncoming traffic!

Between my European races, I did come back to the US, and also competed in the US Rotax Grand Nationals, close to home, at New Jersey Motorsports Park. A couple of friends finally got to see what I do when I miss so much school and also got to see that it really is much faster than what they all say they do at birthday parties.  I am totally confident that my top-5 result this year will turn into podiums or wins next year, when I’m not the youngest competitor. But also I feel really bad for my brother, Michael.. He deserved another National Championship title and it’s a shame that the Rotax let him down when it really counted. But it’s racing and sometimes that happens.

I met some amazing people in 2017.  Michael always talked about how great it was to meet F1 driver, Daniel Ricciardo, and I was excited to get to meet him personally while he hosted a media event for the Ricciardo kart at Casteletto, Italy. I was even happier to be the one who tested his kart in preparation for his arrival. It was a fun experience for me, and on top of that, I was faster than he was! I also got the chance to meet Nissan driver, Ronnie Quintarelli, and spent the day at the track just talking and getting to know each other, between his sessions in the BirelART kart. It was truly great to get to know a driver as experienced in motorsports as Ronnie. Meeting Daniel and Ronnie lead to an amazing weekend in Monza, Italy for the Formula One race. We had All Access pit passes and we hung out in some of the team’s hospitality tents and met many team owners, managers and some drivers. I’ve only been to one F1 race before, but I was only 8. Monza was awesome, and the people & new friends I met throughout the year made it even more amazing.

After all the racing and fun in Europe came to an end for 2017, I made the move back to racing in the US and also started a new chapter in my racing career. I changed teams to the world championship kart team, Kart Republic, based in Italy, and with them I competed in the Senior class at the SKUSA SuperNationals in Las Vegas. It was definitely a tough race having to adjust back to the American style of racing, and also compete as the youngest driver in the entire class, but I was pretty fast overall and pretty competitive. The team and equipment are very good, Even though the results ended up to be a bit of a let-down, I am confident for the future. And although it wasn’t a great ending to 2017, I will continue to learn with Kart Republic for what I know is going to be a very good 2018.

I would like to Thank everyone for your continued support of my racing career. Special thanks to Jim, John & Justin at J3 Competition for the great opportunity on the CompKart, and also to Dino Chiesa of Kart Republic for the new opportunity in Las Vegas. Thank you to Rickard Franchini of ItalSport for all your help throughout the year and to my sponsors such as Focused Project Management, DB Collaborative, Fyshe USA/adidas, and Iona Preparatory School. And most important, thanks to my parents. Michael & I are truly thankful for everything you do for us.

Nick will return to racing action this weekend at the SuperKarts! USA Florida Winter Series in Homestead, Florida. Tune into ekartingnews.com for live audio broadcast.