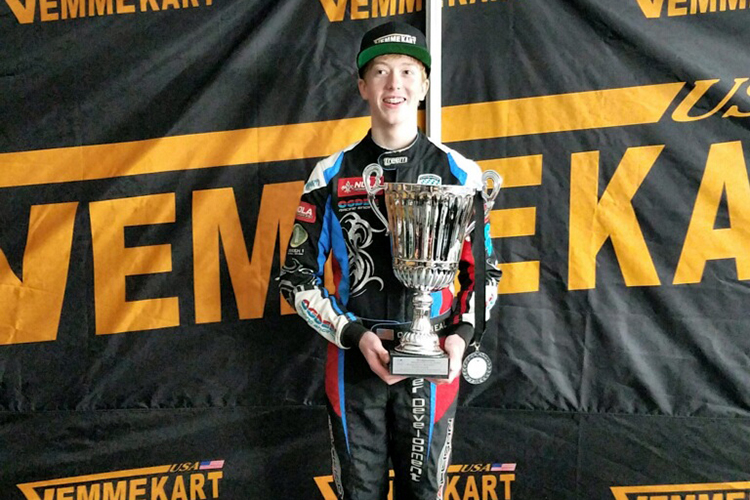 Making the trek from the cold Midwest to the famed Daytona International Speedway to start their 2018season, VemmeKart USA would compete at the World Karting Association (WKA) Manufacturers Cup event this past weekend. Finishing the opening event of the 2018 season with a pair of victories and the championship point lead in the KA100 Senior division, the newest karting brand to hit the market is hungry for more.

“What a weekend in Daytona,” explained VemmeKart USA Importer Andy Gernand. “We had difficult and changing conditions throughout the event and our chassis performed well in all aspects. Colin Neal was able to show that the VemmeKart chassis is a championship contender with his pair of victories while Chase Gardner showed speed in the Sportsman divisions.”

Neal was on rails this weekend and triumphed with a perfect score during the opening event of the 2018 season. With two pole positions, two heat race wins and two main event victories, Neal and his VemmeKart scored maximum points and took control of the championship battle.

Gernand continued, “Colin was fast since we unloaded on Thursday. We made very few changes to the chassis and the speed remained throughout the wet and dry weather conditions.”

Alex Salsbury entered the IAME Senior division and was pleased with his progress throughout the weekend. Competing aboard the VemmeKart for the very first time, the driver from New York spent Thursday integrating himself to the characteristics of his new chassis and braking capabilities. Progressing throughout the weekend, Salsbury overcame some bad racing luck and showed speed to run in the front half of the field by the time the final checkered flag had flown.

Making the trek from Texas to Florida, Chase Gardner would enter the Mini Swift and Yamaha Sportsman classes to begin his preparation for the 2018 racing season. Having never seen the track before and in his first career WKA event, Gardner scored a sixth place result in Yamaha Sportsman on Friday and improved earning a fifth place result on Saturday. In the Mini Swift class, Gardner ran in the top-ten throughout the weekend and consistently battled in the top-five. Though the speed from his VemmeKart was there, racing luck was not as the talented driver was involved in a pair of on track incidents that were no fault of his own.

Gernand added, “Alex had a good event for his first time behind the wheel of a VemmeKart and Chase was running in third before being driven over by an impetuous competitor. All in all, it was a good weekend for the brand as we were able to put the VemmeKart logo and name out there and show people that we are a force for the future.”