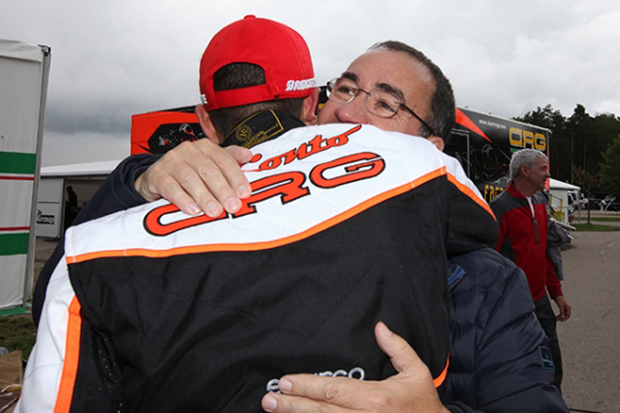 A lot of interesting topics have been discussed by CRG’s President Giancarlo Tinini on the successful season just ended for the Italian company. Several interventions needed to improve karting and grant higher competitiveness and participation.

CRG has closed another sporting season with excellent results in International Karting races in 2017, and the most prestigious victory of the CIK-FIA KZ World Championship did not go missing also in this season.

The title obtained by Paolo De Conto in Wackersdorf on CRG-TM-Bridgestone is the fourth KZ World Title in the past 5 years, and the eighth in the last 10. These overwhelming numbers highlight a clear truth: CRG is the absolute protagonist on the International karting scene.

“KZ is certainly the class in which we are most successful – CRG SpA’s President Giancarlo Tinini commented – but we also scored good results in the other classes as well. With a bit more of good luck, we could have claimed important results in the CIK-FIA Championships, alongside the KZ World Championship won by De Conto and the European KZ Championship taken by De Conto again. In any case, we also won a very competitive Championship like DTM with Dennis Hauger in OK, Kas Haverkort in Junior and Jorrit Pex in KZ2. Some further satisfaction came also from the National Championships and in International events like in Las Vegas. It is fair to say that things went quite well for us, and we displayed a good level also in OK and OK-Junior.”

“Paolo already showed his value before joining CRG. Perhaps, he managed to find that little bit extra to score the big target with us, but we all knew that Paolo is a very competitive driver before.”

– The four World titles in KZ in the past 5 years started with Max Verstappen in 2013 and were followed by that won by Jorrit Pex in 2015 and the double win by Paolo De Conto in 2016 and 2017. In the past 10 years, Jonathan Thonon kicked off the positive series in 2007 taking three world titles in a row before claiming another one in 2011.

“We restarted an important series of victories with Max Verstappen and now that he is in Formula 1 we can see how important it was for Max to start his career from karting. His trajectories, especially in the wet, come from his experience in karting. Karting nowadays is turning out to be a breeding ground for future motorsport champions, more than other minor formulas.”

– What should we expect from regulations to improve karting as a champions training ground?

“Some specific aspects need intervention. I am ever more convinced that karting should use softer tyres. Grip is crucial in karting for the competitiveness, spectacle and preparation of drivers to higher formulas. The current tendency goes towards harder tyres though, but this is the totally wrong direction, especially in Europe. It is necessary that people in charge of taking these decisions realize the needs of this world: drivers have more fun driving karts with more grip, rather than on hard and slower tyres: in the former case spectacle is increased, as some overtaking moves otherwise impossible can be attempted. Another aspect to change is the front fairing penalty following a contact. This rule is spoiling the result of several races and this hits karting in the worst possible way.”

“We will have another new important collaboration with TM Racing regarding engines. They will continue to give their support in KZ, but also provide some of our drivers with the engine in OK and OK-Junior. We will nevertheless continue working with Iame engines prepared as usual by KVS, a collaboration we have been very happy with in the last few years. Regarding drivers, several of our drivers have already been confirmed, but we are also working at several new agreements and we will bring to our team some important names. Regarding our brands for 2018, alongside CRG, we will have Zanardi with the external team led by Willemjan Keijzer and Kalì-Kart, for which we are considering a collaboration with another team”.

“Yes, Enzo Trulli will join our team in OK-Junior. To be honest I was quite surprised by Jarno Trulli’s phone call when he asked me if his son could have race for us. We met and quickly found an agreement to join efforts for season 2018. Obviously, I am delighted by the fact that Jarno Trulli chose CRG to run the next international championships, and I cannot be but proud by this choice of his.”

– Regarding costs of international karting, what are the actions that can improve the current situation?

“As constructors we are doing our part, but I would say that further actions can be taken regarding entry fees, fuels and tyres. Little things, but when considered together they can make a team save a lot of money. Our Racing Team already has very low costs, even lower than other teams”.

– What is the reason that international OK and OK-Junior classes still struggle to make it into National Championships?

“I believe that the shadow of the old KF is still negatively impacting there. Nowadays, OK is a great class with a great engine. It is a really good engine, easy, reliable and powerful. But ASNs are still reluctant to undertake this new road. I believe CIK should push ASNs to give more space to these classes.”

– What is CRG balance of 2017 from a commercial viewpoint?

“We had one of our best years, we are growing. We are happy with our Rental product, as I believe we deliver a product that matches the name of our brand. We are getting a lot of appreciation by people that tested our Rental karts. Now we are one of the few companies that offer a complete range of products, all featuring a good level.”

– What commercial initiatives and activities are going to be central for CRG in 2018?

“Excluding the activity of our Racing Team, we will insist on Endurance races with the objective of making our product known to a higher number of people. We will continue to propose the Briggs & Stratton engine because I believe that today it is the only entry-level product that can take a lot of enthusiasts closer to karting. It is cheap to buy and to run. It is certainly less powerful than a 2 strokes engine, but those who tried it found it a good and nice product to drive.”

– Season 2018 has two important novelties regarding CIK-FIA: Felipe Massa is the new President and RGMMC Group the new Promoter. What is your opinion?

“I know Felipe very well, he has always liked karting. I hope he can do the job of the President, without being too much involved with politics. Regarding the Promoter change, I also know very well Geidel, as we took part in some of his Rotax races. They are a group of professional people, I believe they will be up to the situation. Obviously WSK acquired a remarkable experience in CIK-FIA Championships, but the Geidel’s RGMMC Group have done a good job in Rotax and X30 races. We will see…”