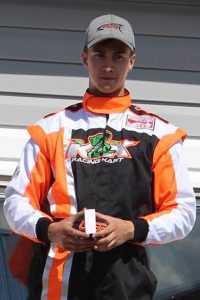 The 2016 overall and Canadian top driver in the Briggs Weekly Racing Series was Skylar Dunning. A total of 203 points and average of 25.4 put the Canadian at the top of the 2016 program, racing at his home track of the Edmonton and District Kart Racing Association (EDKRA). This season, Dunning scored more points and established an improved average score at the Calgary Kart Racing Club (CKRC). The two tracks, EDKRA and the North Star Raceway at Strathmore Motorsport Park are just a three-hour drive from each other, providing the providence of Alberta with two strong, growing karting clubs and tracks.

Dunning began karting back in 2004 with an early 2000s CRG powered by a 5.5hp Honda when EDKRA was racing at the Stratotech Park, northeast of downtown Edmonton. EDKRA, formed in 1972, built a new track adjacent to an old club circuit in Warburg, Alberta in 2010, which is now the club’s current home. Since 2005, Dunning has raced at both EDKRA and CKRC. In 2013, Dunning represented Team Canada at the Rotax Max Challenge Grand Finals in New Orleans, racing in the Senior Max category.

“I continue to race the Briggs package because of the close and competitive racing. Also, it is more affordable than other classes. I have raced at both clubs pretty evenly since 2005. Some years favored one or the other depending on scheduling. The family atmospheres at both the CKRC and EDKRA is what keeps the sport enjoyable for me.”

In 2017, Dunning finished sixth in the CKRC Briggs & Stratton Light championship standings. A string of six podium finishes were highlighted by two victories, which helped him to place top-10 in the Briggs WRS program. Skylar also competed at the EDKRA, earning this year’s championship in the Briggs & Stratton Senior category. Dunning drove to 12 podiums in 12 main events, including seven wins.