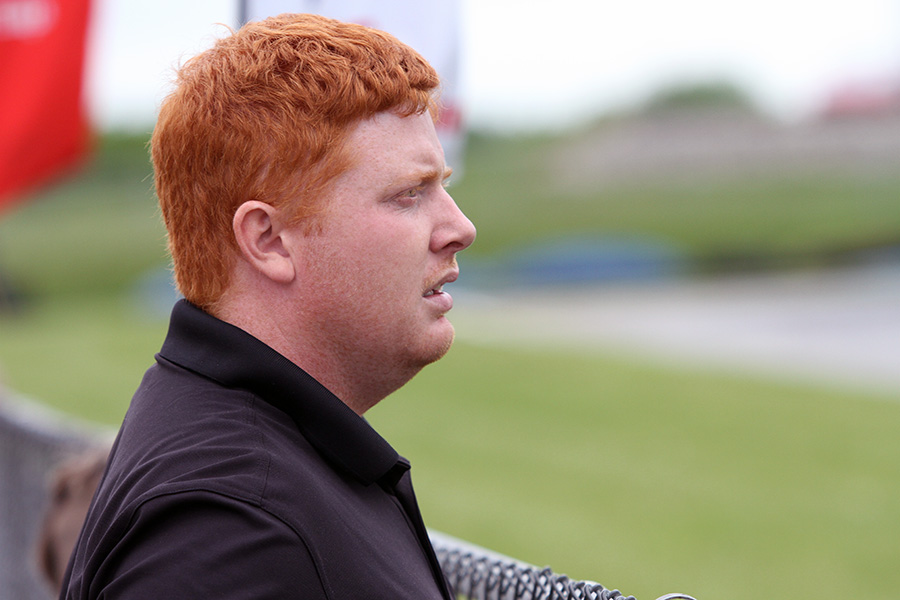 The 2017 season was a busy one for American karting manufacturer Margay Racing. Their focus on grassroots racing, along with national level competition, has kept the welding room busy producing new Ignite frames for many racers around the country while the race team traveled all over the eastern half of the United States. Each and every season ends and begins with Margay’s support and entry in the annual World Karting Association Daytona KartWeek at the Daytona International Speedway in Daytona Beach, Florida. The 2017 edition will be unique from past races, with Margay providing equipment and staffing for the inaugural Dash at Daytona, which will be part of the Manufacturers Cup Series event.

At the helm and often behind-the-scenes is Margay Racing’s Greg Dingess. For the St. Louis resident, nearly every day of the year has been spent at the shop or at the race track. A regular day at the Margay factory is focused on producing orders, contacting dealers and racers, and developing new programs, such as the Dash at Daytona. Margay is most definitely pushing non-stop to grow their brand and the sport. Gateway Kartplex, the new home track for Margay Racing that set inside the Gateway Motorsports Park – part of the Outstanding Facility of the Year Award at the Race Track Business Conference – is helping to grow the grassroots level of karting in the St. Louis area once again. The region is expanding as well, thanks to tracks in the Midwest jumping on-board with the Ignite program, including the new Challenge series that includes five area tracks. Add in the race team aspect with the Margay Arrive-and-Drive and customer support at WKA, USPKS, SKUSA and other special events throughout the year, and you have an American manufacturer that is working flat-out all year.

We were able to pin Dingess down for a few minutes to have him give us an overview of what Margay provides for racers of all levels of competition.

eKartingNews.com: The Ignite K3 has certainly taken the sport by storm, as it’s such an affordable program that connects two legendary brands in American karting – Margay and Briggs Racing. For those new to the sport, can you start by providing an overview of the package, and then move on to discuss how the Ignite program is growing, both in your arrive-and-drive opportunities and as a spec program for local kart clubs and tracks? 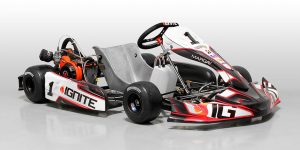 Greg Dingess: The Ignite K3 kart was designed for our Ignite Spec class that runs throughout the Midwest, where racers compete on the same chassis, with the same engine and tire package – minimizing costs and placing the emphasis on the driver.  The program is designed for club tracks and provides a clear entry path into the sport for new racers – no more confusing them with different classes, engines, tires, etc.  If you want to get off the couch and in a kart, this is where you start.  That said, the class isn’t limited to new racers.  It is also appealing to experienced drivers who may have left the sport because of high costs and time commitments. We are seeing numerous drivers coming back to karting because they find the Ignite class affordable yet extremely challenging.

The program continues to grow and provide opportunities for both arrive & drive customers and owner-racers to compete at some truly marquis events: the Rock Island Grand Prix, Battle at the Brickyard and, new for 2018, the Daytona KartWeek.  The promoters of these events have recognized the main goal of the Ignite class…which is to bring new people to the sport…and they have embraced it.  We saw 46 karts in Ignite Senior and really great racing throughout the field at Indianapolis. To be able to take the same kart that you race at your local track and also compete at Indianapolis Motor Speedway and Daytona is really pretty amazing.

We offer a turn-key rules and promotions package for clubs, tracks and regional series that is a true ‘plug & play’ program. Promoters who embrace it see results, growth and more drivers on the track.

The Ignite K3 isn’t restricted to spec racing.  Racers all around the country, including some of our own WKA racers, use the Ignite K3 package on a national level.  We spent countless hours developing a kart that was neutral and balanced on both hard and soft tire combinations.  The result is a product that can qualify pole in Daytona at the WKA race on a soft YLC tire and park it in the winner’s circle at a local race on the harder YDS tire – all on the same set-up!

EKN: New for the 2017 season was the regional series – the Ignite Challenge – welcoming five tracks in the Midwest area that provide the Ignite program at their club races. Tell us more about the program. 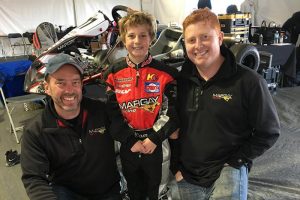 Margay owner Keith Freber and Dingess with one of their young racers (Photo: Margay Racing)

GD: The Ignite Challenge is a regional series designed to offer our Ignite club racers the opportunity to experience other great tracks throughout the Midwest under the same rule package that they use week in and week out. No changing slides or weights or tires. Each track we visit runs the Ignite program as part of their standard class structure, so it is a plug-and-play series that helps gain exposure for the clubs and provides the racers with opportunities to race at some pretty historical racetracks. Drivers are challenged with new tracks, new friendships are formed and the clubs gain new members. It’s a win for everybody.

EKN: Let’s hone in on the arrive-and-drive program. I have been able to compete with your program in the Margay Ignite Shootout at the Rock Island Grand Prix over the past three years and really enjoyed the experience, no matter the results. It’s such a great way to enjoy the event, running in a program with equally-prepared karts, against other arrive-and-drive competitors as well as racers from the Ignite program at the Gateway Kartplex. We mentioned to a few West Coast racers earlier this year that the Ignite Shootout is the perfect way for a driver to cross the Rock Island GP off their bucket list.  Talk about the program, and about its expansion this year to three Ignite categories. 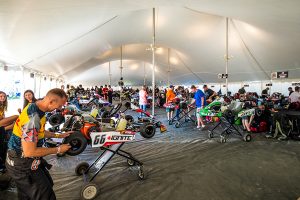 A fun, family and competitive atmosphere under the Margay tent (Photo: Margay Racing)

GD: It’s pretty simple – the RIGP is a really great event. The grassroots karter isn’t interested in racing for the Super Pro International Tour Pro Championship…they just want to race at fun, well-organized events! When Roger (Ruthart) presented an opportunity to come on-board with our program, it was a no brainer. We’ve expanded every year in numbers and in class structure. This year, we had three classes: Ignite Junior (the only Junior class at RIGP), Ignite Senior and new-for-2017 was the Ignite Masters category. All the competitors race on the same Ignite K3 chassis, sealed Briggs LO206 engine and Bridgestone YDS tires, which last all weekend and don’t require the purchase of a new set for qualifying. Our Arrive & Drive program is a light, fun, completive experience. We deliver a factory prepped Ignite K3 kart, cater lunch each day, provide mechanics to turn the wrenches and supply a fun atmosphere…it doesn’t get any easier than that!

EKN: The ‘Dash at Daytona’ is a new event that has been added, and it’s coming up in a couple of days as part of the WKA Daytona KartWeek. Margay has been a long-time supporter of the event, and Mr. Freber uses it as his annual pilgrimage back behind the wheel on the road racing circuit, hitting the high-banks in his Margay laydown kart. This event is truly going to be special for a number of drivers, as you’re also welcoming some familiar names from the IndyCar ranks. Give us some insight into how this came about and what is in store for the inaugural Dash at Daytona. 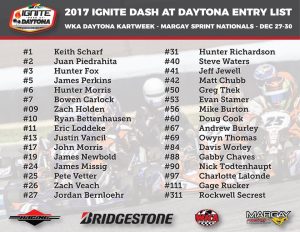 GD: WKA approached us earlier this year about adding the Ignite class at Daytona after the success the program had at the Brickyard and RIGP events and they wanted to build on that. It was a no-brainer for everyone. Ignite racers get the chance to spend the holiday break in Florida at the famous Daytona International Speedway and WKA gets exposure to new and eager members. Pretty easy decision!

The entry list is definitely one that we are very excited about. You’ve got IndyCar and Indy Lights drivers (Gabby Chaves, Zach Veach, Juan Piedrahita), our Rock Island Grand Prix (Jordan Bernloehr, Pete Vetter) and Battle at the Brickyard (Charlotte Lalonde) winners, local Ignite champions (Ryan Bettenhausen, Nick Todtenhaupt) and a grid full of Ignite veterans and hungry newcomers. It’s going to be a really cool race to watch!

EKN: The Arrive-and-Drive program expanded to the new USAC Karting Battle at the Brickyard inside the Indianapolis Motor Speedway this past summer. You mentioned earlier that there were 46 karts in the Ignite category, among other Margay drivers taking part in the other classes at the inaugural event. It was certainly bigger than Rock Island or Daytona in 2016, bringing in more drivers from different parts of the country to experience this unique opportunity. What separates a weekend under the Margay Ignite program from, say, the SKUSA SuperNationals or another major karting event in the United States? 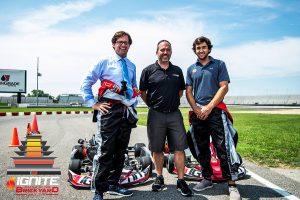 GD: I think the Ignite program and your typical national 2-cycle program are completely different. Our focus is on providing competitors with equally-prepared equipment aimed at creating a level playing field. One of the biggest differences is the camaraderie and teamwork throughout the pits. The paddock at a SKUSA or WKA race is filled with 20 teams all competing against each other with a “win at all costs” mentality. In the Ignite program, everyone is on the same team – and it shows as you walk around the tent. Veteran guys showing new guys the lines, older guys teaching the young guns how to change their sprocket…it’s all really good stuff. We’ve got a really great group of people that race with us at these events, and the program wouldn’t be the same without them.