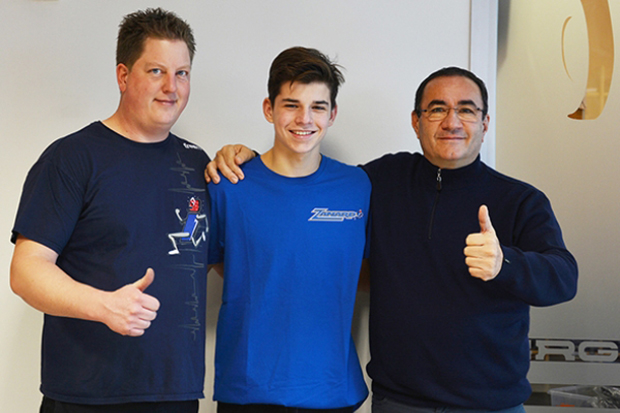 CRG is pleased to announce Willemjan Keijzer as the new manager of the Zanardi team, that will take part to the CIK-FIA and WSK international programmes under the name of Zanardi Racing Team.

The Dutch technician, 36 years old, gained an important experience in international karting running his own team with CRG equipment (Keijzer Racing, winner of the DKM with Kas Haverkort in this season) and in 2014 he already worked with the Zanardi chassis line. With this choice, CRG wants to continue a winning management set up for the Zanardi brand.

The technical synergy between the CRG factory and the team run by Keijzer will be very close, both from the technical point of view and the official drivers’ management. The Zanardi team will be committed in the KZ, OK and OKJ international categories in the most important events, as the CIK-FIA World and European Championships. About the engines, the technical collaboration with KVS has been made official, who will provide the team with IAME engines.

Together with Willemjan Keijzer’s presentation as the racing team manager, also the first 4 official drivers were presented: Glenn Van Berlo and Kas Haverkort in the OK class, Bart Ploeg in the OKJ and Dylan Davies in the KZ2. The line-up will be completed in January with other 2-3 drivers that will be decided after the tests that the team is planning in the next weeks.

The technical work and the ambitions for the future will be up to expectations and the brand’s history, conceived by Alex Zanardi in the early 2000. For these goals, many activities will be launched, also supporting teams in the national championships.

This is how Giancarlo Tinini presented the new course for the Zanardi brand: “Our goal is organizing a team able to be immediately competitive and the collaboration with Willemjan Keijzer allows us to have a team made of many experienced technicians at international level who work well together with our company. We will also have continuity with the drivers, for instance Van Berlo and Haverkort raced with our technical equipment and this will allow us to start working immediately without surprises, in this preparation phase for the next season. Moreover, the agreement with Keijzer will give new impulse to the Zanardi brand in Northern Europe, an important market area, where he’s always been present also in the national championships. We are satisfied with the work and the interest that the Zanardi line is producing and we wish to continue this brand’s winning tradition, also improving the retail network and the direct collaborations with some external teams.”

Also Willemjan Keijzer comments positively the agreement: “I take over an important inheritance for the success that the Zanardi team achieved in the last 10-12 years, but this is also a great incentive and motivation for me. My relationship with CRG strengthened during these years and I am glad about this new step for my professional path. In these days, we are on the track with the new homologation chassis and we will continue testing also in January, when we will have the opportunity to consider other drivers beyond the ones already confirmed. I want to thank Giancarlo Tinini and I will do my best to recompense for the confidence given.”