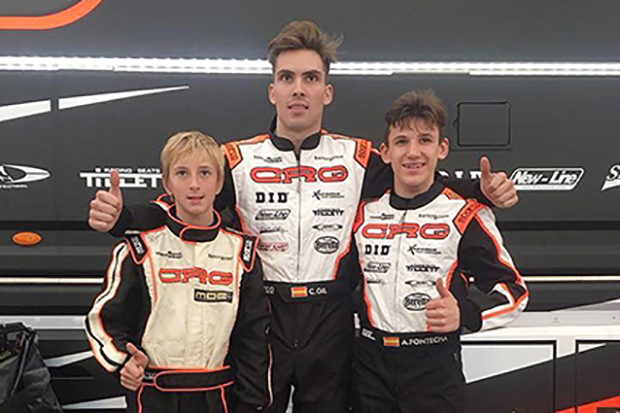 CRG has been protagonist at the 17th Champions Cup with Ayrton Fontecha shining in Junior, Filippo Berto in KZ2, Carlos Dembilio in Senior and Alejandro Melendez in Cadets.

The Spanish circuit in Vendrell has staged the traditional end of season Champions Cup, that has reached this year the 17th edition and has scored a very good international participation once again.

CRG drivers obtained interesting results in all categories. Ayrton Fontecha of team MDC has been one of the main protagonists of Junior. Following the victory in Prefinal, he was unfortunately forced to a comeback Final recovering from last up to P2 finishing in the slipstream of the winner Mari Boya.  Paul Enders was seventh and Mike Gorke eighth instead. Javier Sagrera of M2 Racing has also been among the quickest of Junior, but had to retire from the Final after the fourth place obtained in Prefinal.

Filippo Berto put in a great performance in KZ2. He was fourth in Prefinal and Final, while Carlos Gil was fifth at the flag, but later on demoted to sixth by a 5s time penalty. He led team mates Lisard Santos and Jon Tanko though. Miguel Molina closed his weekend in the top ten despite a 5s penalty, while Enrico Prosperi was 11th and Emilien Denner 13th on Kalì-Kart. Good runs have also put in by Oriol Dalmau, who closed 14th leading Kilian Meyer, who was at his debut in KZ2 and Adam Vila. The Final was won by Alex Irlando.

CRG claimed another podium in Senior with Carlos Dembilio who ended the Final in P3 behind Daniel Macia and Sam White at the end of a good comeback race from P7 of the Prefinal.

Alejandro Melendez of team MDC secured a victory for CRG in the Cadets. He dominated the youngsters category, while David Rodriguez, Hugo Sanchez and Eric Gene have been shining in the Avelin class ending their race respectively in fifth, sixth and seventh position. The victory went to Aaron Garcia.