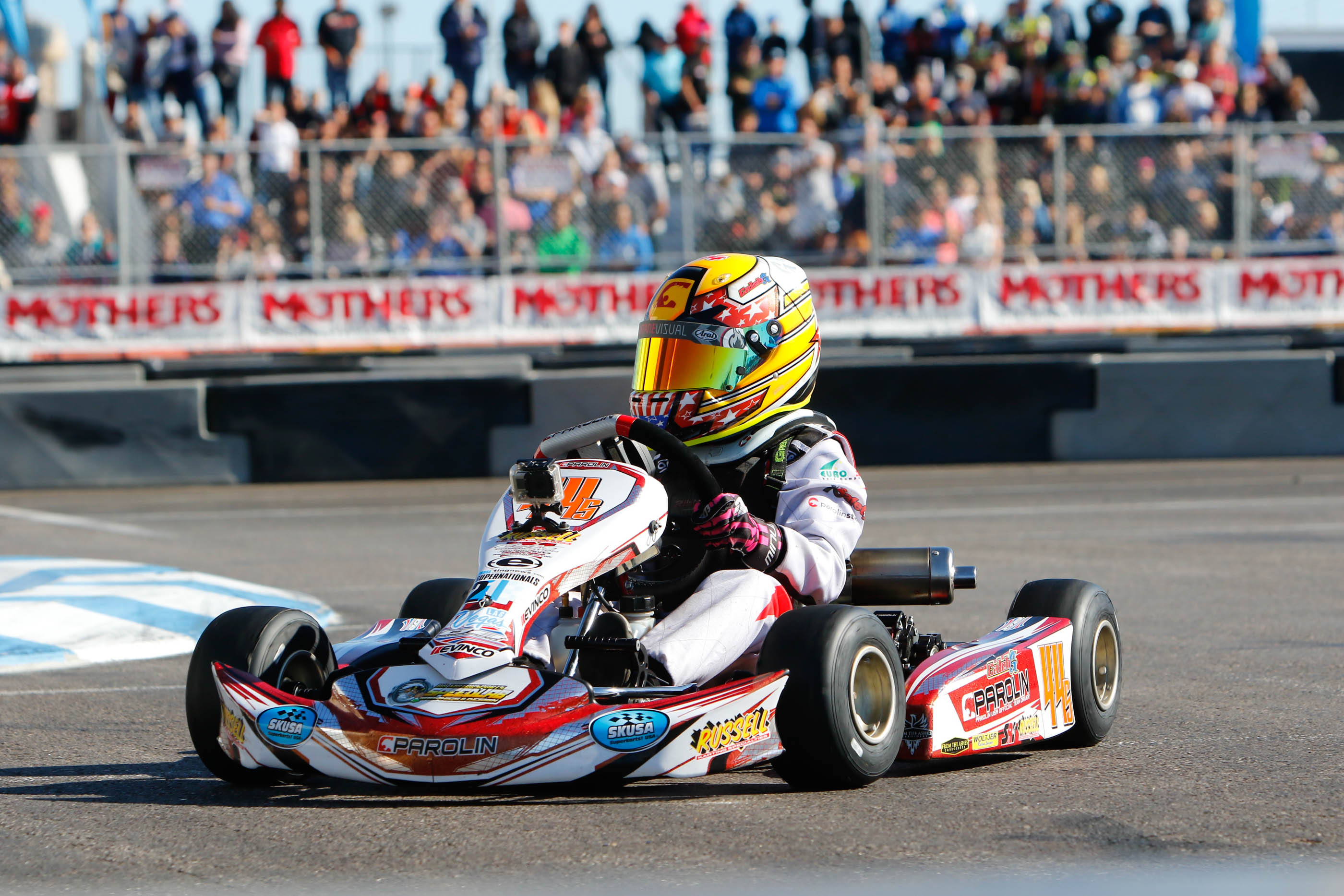 Caleb Gafrarar drove to a top-five finish at the SKUSA SuperNationals 21 (Photo: On Track Promotions - otp.ca)

The goal for Caleb Gafrarar at the end of November 2016 was to return back to the Superkarts! USA SuperNationals, and stand on the podium. For the 364 days, the Parolin USA driver from North Carolina put in the time and effort to be at his best in his second trip back to the SuperNats. ‘Caleb G’, along with 500 drivers from around the world, traveled to the Las Vegas Convention Center | Westgate Las Vegas Resort & Casino for the 21st running of the world’s largest karting event. Gafrarar was able to achieve his ultimate objective, standing on the SKUSA steps on SuperSunday.

The return to Vegas and the SuperNationals began in the correct path for Gafrarar, putting his Parolin machine toward the top of the time charts for the seven practice sessions. Qualifying at the end of Thursday’s schedule set the fate for the youngest category at the event. Clean track ahead was crucial to laying down a fast lap in all the categories, especially in the Micro class with 38 drivers. Caleb G was caught in a tough position on the course, unable to get a clean lap, posting a 1:10.903 lap time, off by nearly nine tenths of a second to end up 13th overall. Learning from last year, Gafrarar managed to stay out of trouble, never placing himself in precarious situations. Finishes of eighth, 11th and ninth provided him the boost up to seventh on the grid for the main event on SuperSunday. 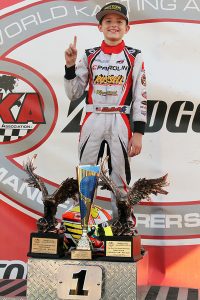 Starting inside of row four was a preferred spot, holding the inside line into the opening hairpin corner. It helped Gafrarar maintain his position through the opening corners and up into sixth spot the first time past the scoring loop. Into fifth by lap five, Gafrarar had the lead group in his sights. The second-year Micro Swift driver stayed composed, waiting for the right opportunity to present itself. With two laps remaining, all plans went out the window as the lead group shuffled around corner by corner. Amazing kart control by all the drivers involved provided a thrilling final few corners heading to the checkered flag. Gafrarar fell back to eighth at one point, however, was able to knife his Parolin up into fifth as the checkered flag waved. Following post-race penalties, Caleb G was awarded the fourth-place position.

Prior to the SKUSA SuperNationals, the WKA Manufacturers Cup Series wrapped up at Gafrarar’s home track of GoPro Motorplex in October. Caleb G went into the event with three wins, sitting second in the Mini Swift championship standings. Gafrarar was able to secure victory in both rounds of racing to clinch his first career WKA championship. Following the SuperNationals, he returned to GoPro Motorplex to close out the Karting Challenge program. The final round on December 2 was a battle all day, dealing with kart and engine issues. By the Final, Gafrarar had everything worked out and drove his way to the runner-up position. That result put him in a tie for the championship, with Caleb G earning the tie-breaker with his six victories in nine races to claim his first GoPro Motorplex Karting Challenge title.

The nine-year-old now turns his attention to his third season in the Cadet ranks, focusing on the Superkarts! USA Winter Series to open up 2018. His first trip is scheduled for January 12-14 at the AMR Homestead-Miami Motorplex presented by MG Tires with the program concluding on February 9-11 at the Ocala Gran Prix. A third season at the SKUSA Pro Tour will follow, including trips to New Orleans, Sonoma, and Indiana, along with the SKUSA SuperNationals 22 in November. Select events will be included with possible events working with the Parolin factory team.