All five SCR branded drivers finish in the top-ten 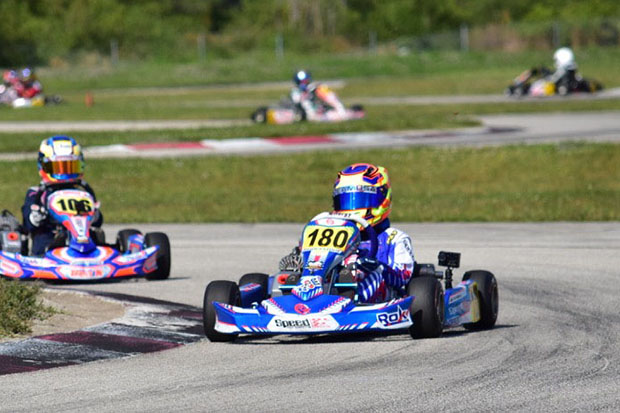 With the first annual Vortex ROK Winter Cup taking place this past weekend at the Palm Beach Karting facility in Jupiter, Florida, Speed Concepts Racing (SCR) would enter five drivers in the official tune-up event for the 2018 ROK Cup Promotions Florida Winter Tour. With more than $25,000 in cash and prizes on the line, Speed Concepts Racing branded drivers would claim one victory, three podiums en route to all five drivers finishing in the top-ten in their respective classes.

Leading the way in the Vortex Mini ROK class was eventual race winner Alex Powell. After a mechanical gremlin in qualifying and forced to start all three heat races from the tail of the field, Powell methodically moved his way forward to top the blocks on Sunday. Saturday would see the youngster claim ninth, 25th and eighth place results in his heat races before taking the checkers in Sunday morning’s prefinal. With the momentum from the win and confidence in his race craft, Powell dominated the main event as was named the inaugural ROK Winter Cup Champion.

Flexing their muscles when it counted, SCR put a trio of drivers in the top-ten in the Mini ROK division. Paul Bocuse turned his tenth place qualifying effort into seventh, 20th and seventh place results in the heat races before finishing ninth in the prefinal. Advancing forward another four positions in the main event, Bocuse would end his weekend with a solid fifth place result all while showing speed to compete with the leaders.

SCR newcomer Noah Baker would have a disastrous Saturday but would make up for it on Sunday. After qualifying in the eleventh position, Baker posted 24th, 24th and 21st place results in the heat races and would start Sunday’s prefinal near the tail of the field. With a never say die attitude and always working hard, Baker was on a mission on Sunday and drove to a twelfth place finish in the prefinal before putting another Speed Concepts Racing driver in the top-ten in the main event with a tenth place result.

Jeremy Fairbairn and Kyffin Simpson would fly the Speed Concepts Racing banner in ROK Junior and close the weekend strong. Fairbairn was one of the drivers to beat all weekend long as turned his fourth place result in qualifying to a pair of second place results and a 12th place finish in the three heat races. Simpson, in his first Junior event, qualified 11th before turning in a pair of seventh place results in heat one and two and a 14th place finish in heat three.

On to Sunday, both drivers would drive well and they were rewarded with impressive results. Fairbairn claimed the prefinal victory and all important pole position for the main event while Simpson failed to finish and was mired back in 15th. In the main event, Simpson took advantage of newer tires and sliced and diced his way through the field while Fairbairn battled hard up front. When the dust had settled and the final checkered flag had flown, Fairbairn would end his weekend with a second place podium finish while Simpson would have a solid drive in his first Junior event going from 15th to a third, joining his SCR teammate on the podium.

“Saturday was a difficult day for several of our drivers but we were able to regroup that night and focus on Sunday,” expressed Mike Speed. “We had some mechanical gremlins and some on track issues that hindered some results but we were able to pull through when it counted. Congrats to Alex on his win as well as Jeremy and Kyffin on their podium results.”