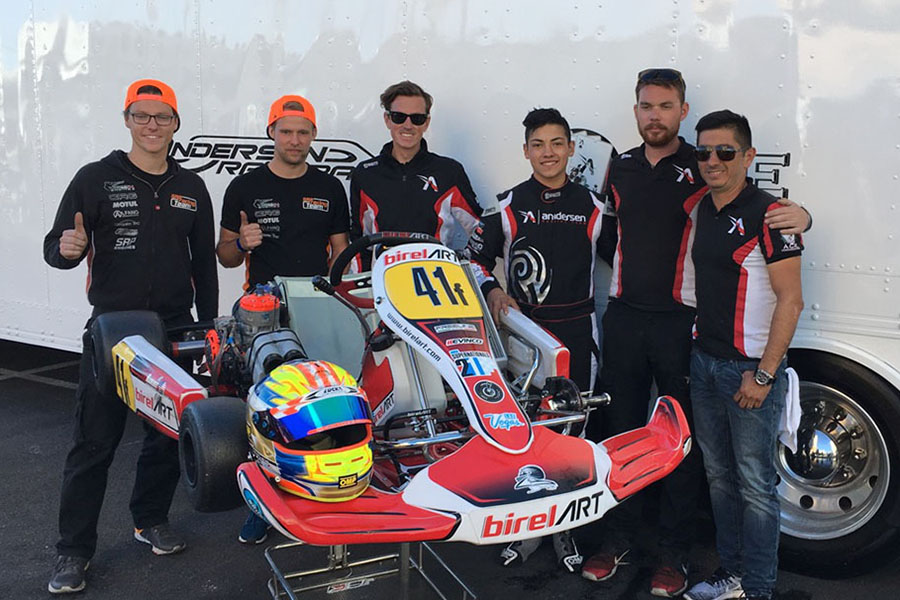 Though the results were not what was desired, Mathias Ramirez showed speed at SuperNationals 21
in both the S1 and KZ categories (Photo: Andersen Racing)

Moving to the Senior ranks at the beginning of the 2017 season, Floridian driver Mathias Ramirez was looking to gain experience in a quest for race wins and championship battles in 2018. Teaming with Andersen Racing and the Birel ART program, Ramirez quickly began to put value to his name as he often found himself at the pointy end of a talented field of drivers.

Opening the season at the Florida Winter Tour and progressing through 2017 with solid results, Ramirez and his Andersen Racing program had their eyes focused on the Superkarts! USA (SKUSA) SuperNationals 21 as the duo would battle in both the S1 and KZ gearbox categories.

“I was able to accomplish one of my dreams and that was to be able to battle wheel-to-wheel with some of the professional karting drivers in the world,” explained Ramirez. “My ultimate goal is to compete in Europe at the highest level of karting as possible and battle with the biggest names of the sport, hopefully being able to put my name and title on major race wins.”

In Las Vegas, Ramirez showed that he has what it takes to be one of karting’s top drivers. In the S1 division, Ramirez piloted his Birel chassis to a sixth place effort in qualifying and ran in the top-five through the heat race flight format. Starting Super Sunday’s main event in the ninth position, the talented Florida resident drove his way forward to the fourth position before a broken engine mount forced him to retire after scoring the fastest lap of the event by a huge three tenths of a second gap.

It all looked to be going well in the KZ category in qualifying as Ramirez closed the session with the third fastest circuit and was excited for his chance to battle in the elite category.

Ramirez added, “The KZ qualifying session went very well until we exited the track. Somehow, I ended up being one pound underweight and my time was disallowed. With every hundredth of a second being important, we were cutting it close on weight and were just shy in the end. It was unfortunate as I really believed that we had the package to challenge for the win.”

Forced to start the heat races from the tail of the field, Ramirez struggled with on track incidents that were no fault of his own and at the end of Saturday competition, would be classified in the 30th position.

Starting outside row fifteen for Super Sunday’s main event, Ramirez put on another show as he sliced and diced his way through the field. Once again scoring the fastest lap of the final, Ramirez drove his Birel ART forward to a top-ten result, ending his weekend with an eighth place finish.

“Though the end results were not what we had come to Vegas for, we did show speed claiming the fastest race lap in both the S1 and KZ main events,” continued Ramirez. “I would like to thank Ronni Sala with Birel ART as well as Jake Mottaz and Ryan Child from Andersen Racing for their hard work and massive support throughout the 2017 racing season. Without these three, I would not have been able to race at the level I did. Also, a big thank you to Ricardo Legree with Legree Motorsports, AM Engines, PSL Karting, Global Project Services, ADC Inc. and CA Design.”

Mathias Ramirez is looking forward to the 2018 season and will announce plans as soon as they are finalized.

For more information or opportunities to partner with Mathias Ramirez, please contact rismaelramirez@aol.com