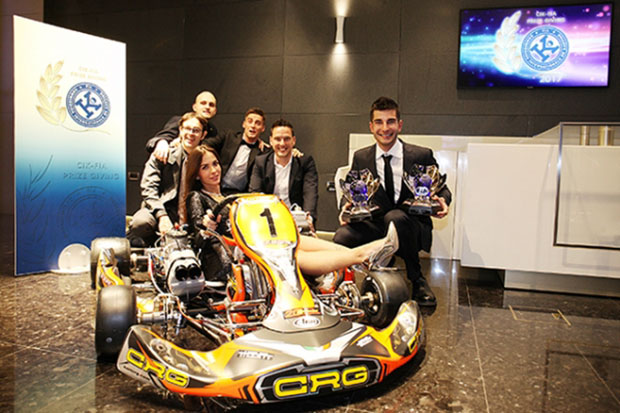 Paolo De Conto and CRG have been on top of Europe and the World at the CIK-FIA Prize Giving 2017 ceremony held at the Excelsior Hotel Gallia in Milan. The Italian driver has been under the spotlight at the yearly prize ceremony organized by the International Karting Commission, where he has been rewarded for his victory at the KZ World and European Championships.

Paolo De Conto has been one of the main protagonists celebrated in the CIK-FIA prize giving ceremony in the presence of all the most important CIK-FIA authorities, including President Abdulla bin Isa Al Khalifa and Vice President Kees van de Grint with the introduction of WSK Promotion President Luca De Donno. De Conto has been rewarded for his second win in a row of the KZ World Championship and third victory of the KZ European Championship.

The Italian driver of CRG racing team from Valdobbiadene (Treviso), ended a very strong season 2017 winning the two CIK-FIA titles on CRG-TM Racing-Bridgestone, rounding it off with the two wins scored in the two international events in Las Vegas and at the Race of Stars in Australia.

“This has been a season to be framed – a satisfied Paolo De Conto stated – I certainly could not have asked for more. It has been a great satisfaction for me to become the reference point in a category that has always been hunting ground for the legends of karting. I am really happy.”

– This second title of the KZ World Championship arrived after losing out on another one at the closing lap in 2015 in Le Mans, but then you managed to bounce back in 2016 winning the World Championship in Kristianstad and repeating it in 2017 in Wackersdorf.

“Things went well anyway in 2015, CRG won the title with back then with my team mate Jorrit Pex and I came second. Personally, that was a hard blow as I could not get the win shortly before the chequered flag. I think that this episode gave me the motivation to be more resolute, that was a wake up call that made me do a quality jump in the following two years.”

– You went through all the karting ladder, from 60 Mini to all the higher categories up to the pinnacle of KZ. What advice would you give to a young rising star?

“Karting is a sport that demands high dedication. If you want to get important results a lot of time and efforts need to be put into it. Training every week is necessary, complementing it with a  correct nutrition and an intense sporting programme to be fit. It is then also very important to dose one own’s strengths during racing weekends to be ready for the finals on Sunday, without being too tired for the closing stages. Another important thing is to know the secrets of the karting mechanics. It is not an easy sport, it is actually quite challenging both from a physical and mental point of view”.

– What is your target for the future?

“My goal is to keep competing in karting full time, with the maximum dedication as I have always done with the things I cared about. After winning this year both the World Championship and the European Championship I think it is going to be difficult to confirm these results, but I will give my best to win again. I have a big responsibility towards CRG now. It is not easy to race with all eyes on you, every little mistake can cost a lot and be criticized heavily. I think that every race for me is going to be like a final of the World Championship. I will get back on track in a few days, headfirst!”