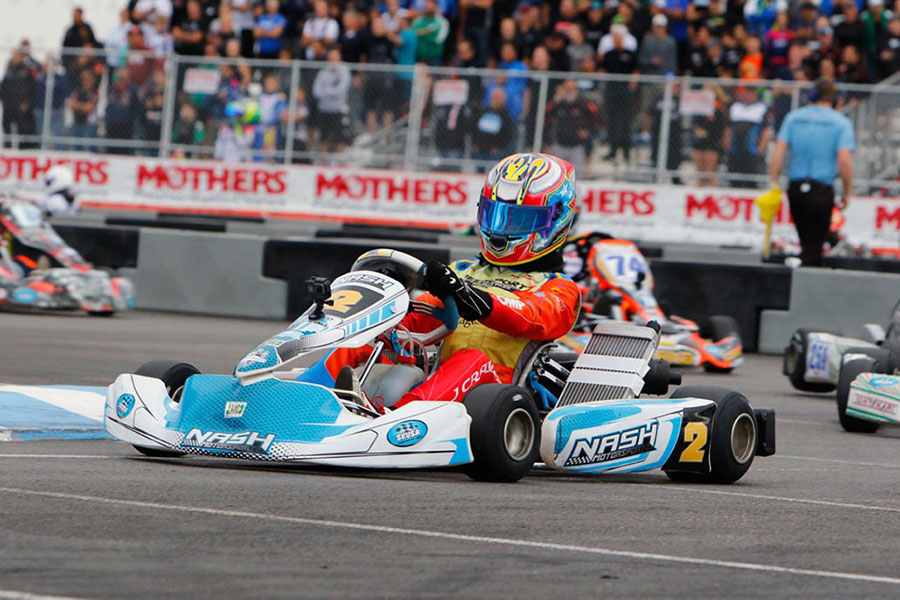 Jak Crawford was on a mission in Las Vegas claiming a SuperNationals victory in X30 Junior (Photo: OTP.ca)

After returning from the Rotax MAX Challenge Grand Finals event in Portimao, Portugal only a few short days before the first official on track day in Las Vegas, Texan Jak Crawford did not let jet lag get the best of him. After claiming the vice-championship at the Superkarts! USA (SKUSA) Pro Tour in 2017 and a sixth pace result at the International Rotax event, the 12-year-old competitor was out for redemption in Nevada and achieved his one and only goal on the weekend, a race win and the title of the Superkarts! USA X30 Junior SuperNationals Champion.

Racing aboard his FA/OTK chassis and teaming with the highly successful California based Nash Motorsportz squad, rookie Junior Crawford hit the track on Wednesday morning and instantly showed his speed. Producing times in the unofficial sessions that would classify him as one of the drivers to beat, it all became real on Thursday afternoon during the short timed qualifying session.

“I really wanted the pole position and thought I could do it without a draft,” explained Jak. “My fuel intake line came undone and was spewing gas all over me and my kart for qualifying laps.  I managed to put the line into the tank just long enough to get one decent qualifying lap even though my tires and brakes had oil mixed fuel all over them.  Then, we almost didn’t make weight because all the gas came out.”

After his third place qualifying effort on Thursday afternoon, Crawford would advance to the front when wheel-to-wheel action commenced and not surrender it for the remaining three days. Claiming three straight victories to sweep the heat race flight format and earning a direct transfer to Super Sunday’s X30 Junior main event, the talented driver would claim the elusive pole position, one that evaded him in qualifying two days prior.

Set to start the biggest karting event in the world from the inside of the front row, Jak had a clear entry to the opening complex or corners and maintained his position for the first lap.  Jak was coached that other lead pack drivers would be quick to pass him since he had so much speed earlier in the week, so he was ready and remained poised for a long race.

A quarter through the race, he positioned himself to stay in the top two and did what he could to push to a two-kart finish which is exactly what happened.  Driving a very smart final and maintaining his tires and equipment until the final few circuits, Crawford, the Junior rookie, took the point and defended like a seasoned veteran over the final lap to claim the biggest win of his young motorsports career.

Crawford continued, “We did it! When we left Portugal with a solid sixth place finish, we made a SuperNationals victory priority. It’s hard to explain but I knew that I was going to win this race once we got back into the States.  Racing bad luck had got me in Vegas last year in Mini Swift when I felt I was a few corners from winning, but not this year. A huge thank you to everyone who has been a part of my racing program in 2017.”

Jak would like to thank OMP racing gear and Bell Helmets USA for their protective race gear. A huge thanks to Precision Works Racing Engines, Chris Hatfield, Seth Nash and all of Nash Motorsportz for their extra effort and hard work at the event and throughout the 2017 season. Together, the team can call themselves ‘SuperNationals 21 Champions’.