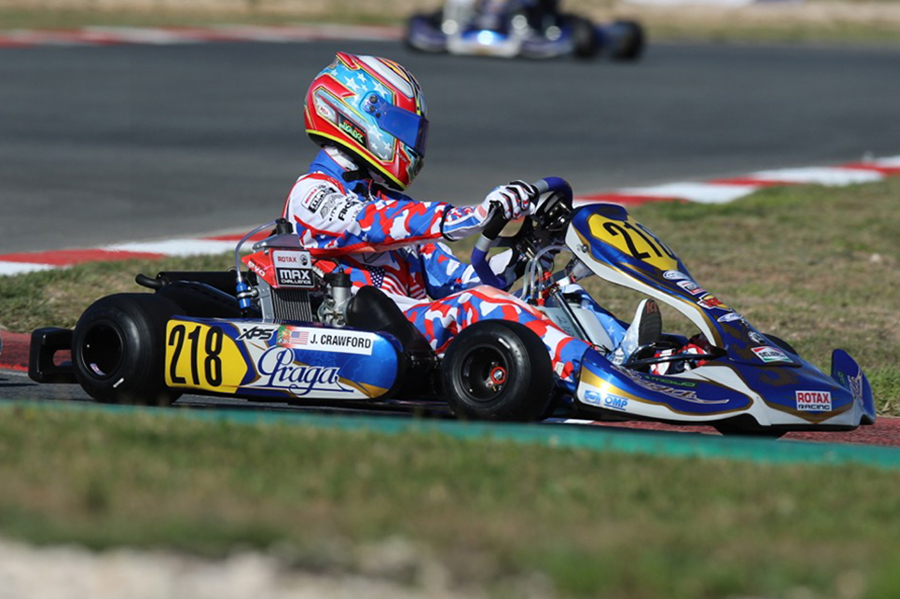 Two weeks ago, Houston, Texas resident Jak Crawford travelled to Portimao, Portugal for the 2017 Rotax MAX Challenge Grand Finals. Earning his Team USA invitation from his Challenge of the Americas Rotax Junior championship, Crawford would represent the United States in the international event that featured more than 360 drivers from more than 50 countries from around the world, including 72 competitors in the Rotax Junior division.

Progressing through the limited amount of practice sessions, Crawford, who was the youngest Junior driver in the field at only 12-years-old, was put to the test in his first European style event as a Junior driver. After showing good speed throughout the practices and claiming the third fastest time in the final practice session, Crawford would have issues in the qualifying session as he was unable to position himself to utilize the draft effectively and would be ranked in the 33rd position.

Forced to start all three of his heat races in the eighth row in the 16th position, the young Texan looked to recover from his qualifying session and take a direct transfer into the prestigious main event at the Grand Final festival. Needing to advance as far forward as possible, Crawford gained at least eight positions in each of his three heat races to move from the 33rd fastest competitor in qualifying to being ranked sixth overall after the heat races.

“With the heat race results, I would start my prefinal in the third position and I knew it was important to continue the forward progress,” explained Crawford. “The points from the heat races would be added to the prefinal result to set the grid for the main event so I was determined to race smart as well as gain as many positions as possible.”

Throughout the week long event, Jak had shown the speed to run at the front, but some bad luck at important times sent him down the order. Recovering nicely, and adding a second place prefinal result to his heat race finishes, Crawford started the main event in P6 and as the highest American driver in the Rotax Junior field.

With the heat races and prefinal complete, the final was going to be an all out dog fight for the win and Crawford was right in the thick of it all. Falling back a few positions due to his outside row starting position, the United States representative battled as high as fourth throughout the 17 lap main event and finished sixth a mere three seconds behind the race winner while the top-ten were separated by just over five seconds.

Crawford continued, “It was a great event and I believe that if qualifying had gone better, I would have been in a better position to challenge for the victory. I can’t thank all the people that have helped me get to where I am today and look forward to the future.”

The young Crawford continues to show his maturity and skill as he turned the negative of qualifying into a positive result when the weekend concluded. A young driver that was able to race smart, keep his nose clean and avoid any penalties, proved that he is a driver now and one that will be a threat for many more race wins and championships throughout his career.

Jak would like to thank OMP racing gear and Bell Helmets USA for their protective race gear. A huge thanks to Chris Freckleton and Nash Motorsportz for their extra effort and hard work at the event and throughout the 2017 season.