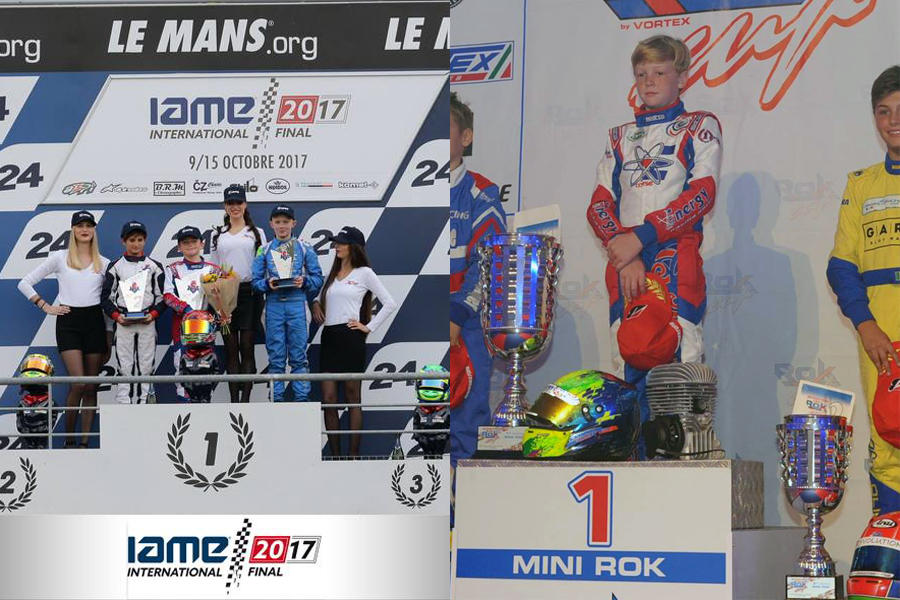 In the matter of 24 hours, the karting community in the United States of America were able to celebrate two world titles by two different drivers at two different events in two different countries. During the week of October 9, Brent Crews and Connor Zilisch were able to earn victory at the IAME International Final and the Rok Cup International Final, helping to become the second and third world title winners from the United States in the Cadet ranks in the last year, joining Diego LaRoque who scored the maiden victory in the Micro Max division at the 2016 Rotax Grand Finals in Italy. Crews and Zilisch joined LaRoque and Logan Sargeant as world title winners in Cadet racing, showing the promise of young racing stars in the making right here in the USA. 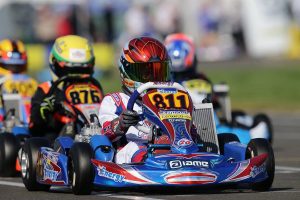 For the first time at the IAME International Final, Cadet driver were welcomed into the event, piloting the X30 Mini powerplants in a capped 34-kart field. The tickets were not for purchased, only earned through IAME programs throughout the world. Five drivers from the United States were able to secure tickets for the event, including two through the United States Pro Kart Series. That is where Crews earned his, while also becoming series champion, as well as Santiago Trisini. Diego LaRoque, Mateo Rubio-Luengo and Ugo Ugochukwu completed Team USA.

The American contingent was at the front of the field throughout the event. Crews was one of them and when it came to qualifying, ended up second behind Rubio-Luengo after Trisini was removed from the provisional pole position for a tech infraction. The Nitro Kart driver, piloting an Energy kart for the event, held his position through the opening heat race. The second moto saw Crews drop to sixth with two positions lost in the third heat to finish fourth. Tallying up his points from the heat races placed him third on the Prefinal grid. Crews put himself into second during the opening circuit of the nine-lap run, right on the bumper of Ugo. A last lap maneuver gave Crews the Prefinal win and the pole position for the main event.

Crews stayed in the lead group throughout the race, only to be caught out as the rest of the field was during a red flag restart. Ugochukwu was able to run away until he was run down by a charging Trisini, with the group Crews was in able to swallow up Ugo. Trisini would go on to cross the line first with Spanish driver Maximus Mayer edging out Crews at the line for second. Officials handed Trisini a five-second bumper penalty along with Mayer, thus promoting Crews to the top step of the podium to become the inaugural world title winner. 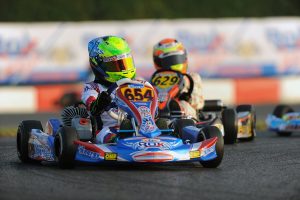 Roughly 1,200 kilometers away in Lonato, Italy was the 15th running of the Rok Cup International Final. Previously, USA drivers had won, including 2015 CIK-FIA World Junior Champion Logan Sargeant in 2011. The Rok event featured 162 drivers from around the world, in just the Mini category, with Zilisch earning his spot thanks to the WKA Bridgestone Mid-Season Shootout. With the size of the field, qualifying was at the utmost importance, and Zilisch capitalized. Qualifying seventh overall, it put him at the front of the heat races where he was able to place second, 10th, third and first in his four heat races. That lined him up on row five for the main event, joined at the front by fellow USA driver Luca Mars. A great start and opening circuit put Zilisch fourth, and a lap later into second. Connor would get pushed back to third, only to regain the runner-up spot with the white flag waving, hanging on to the position through the final lap. Much like Crews, Zilisch celebrated a podium finish as he completed the cool down lap, only to celebrate even further at the scale line, finding out he was promoted to the top step of the podium with provisional winner Karol Pasiewicz from Poland to be handed a five-second penalty for pushback bumper. Joining Zilisch on the podium was Mars, placing fourth to put two USA drivers on the podium in the same category for the first time in event history.

Crews followed his trip to France with a return trip back across the pond to the 2017 Rotax Max Challenge Grand Finals in Portimao, Portugal. Brent was top-10 throughout the event, including two runner-up finishes in the two heat races. A bumper penalty in the Prefinal dropped him to 15th on the grid for the Final, able to climb up to fifth in the 10-lap main event.

The two drivers were among those in contention at the SKUSA SuperNationals 21 in Las Vegas the week before Thanksgiving. Crews and Zilisch started the main event fourth and fifth after qualifying inside the top-15. Both climbed to the front of the field, fighting for the victory. Crews finished second, however, was removed from the results for a technical infraction. Zilisch finished third, and with Crews’ penalty along with that of provisional winner Carson Morgan, was named the winner of the Mini Swift class. 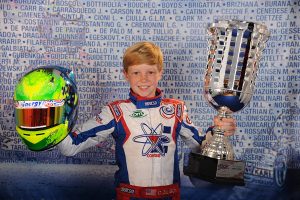 Chassis: Energy Storm
Engine/Engine Builder: Allison Racing Engines
Sponsors: -273
Series You Compete In: SKUSA Pro Tour, Florida Winter Tour, WKA Manufacturers Cup Series
Years Karting: 6.5 years
How did you get started in karting? My dad raced cars as a hobby and he put my brothers in karts and me in a kid kart one day and I grew a passion for go-karting.
What has been the high point in your racing career? The high point in my racing career was my international win in Italy.
What are your goals in racing? My goals are to continue getting top 3’s and maybe get into road racing cars some day
In a few words, how would you describe your driving style? Smooth, consistent, and fast
Funniest moment at the race track? When me and Luca were using a tape ball in Italy and hit a lady in the head and we got yelled at.

What do you do when not at the track? I am always trying to do well in school and keep my grades up.  Dad gets angry when I don’t have straight As.
What are your goals outside of karting? Keep my grades at straight A’s.
What app or game do you play a lot of right now? I use a lot of social media such as Instagram, Snapchat, and Facebook
What type of street car would you like to drive? I would like to drive a BMW M2.
What are your pet peeves or things that irritate you? I don’t like when me and someone else are working together and they pass or start blocking in the middle of the race.
What do you think could be done to improve the sport of karting? They need to figure out how to clean up turn 1 in races so there aren’t so many crashes.  I liked the drop down bumpers in Italy but I know a lot of people here don’t like them.
What are your favorite aspects about the sport of karting? I like the competition and the feeling you get when you’re driving. 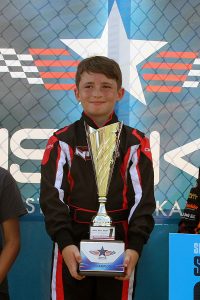 Chassis: Nitro Kart
Engine/Engine Builder: Listening to Offers
Sponsors: Nitro Kart, ABC Supply
Series You Compete In: All
Years Karting: 3
How did you get started in karting? GoPro used to have big races during the week at night and we went to watch one.
What has been the high point in your racing career? Getting past the curse of winning driver of the month this summer.
What are your goals in racing? To become a better driver every time I race.
In a few words, how would you describe your driving style? I’m a savage
Funniest moment at the race track? Danny had an accident in his pants in Ben’s motorhome. He took them off and left them on the counter.