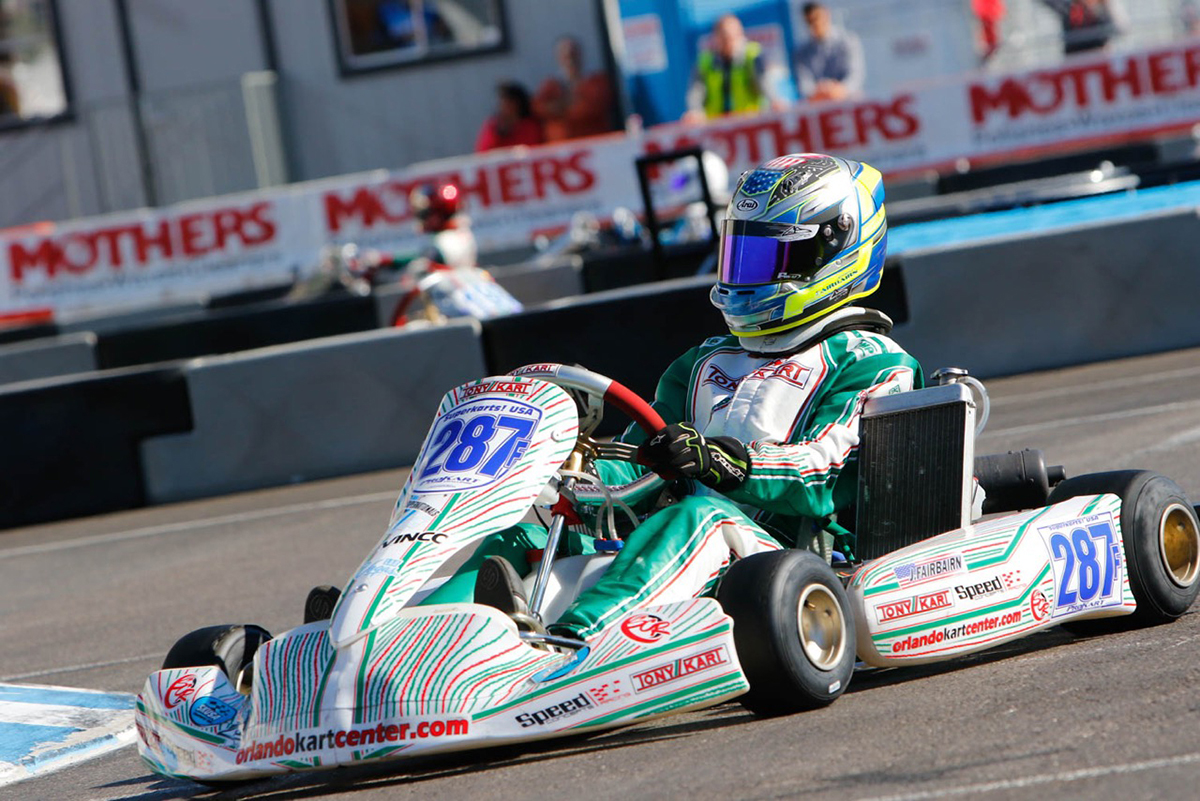 The unofficial end to the 2017 karting season has now come and gone with Speed Concepts Racing (SCR) ending their Superkarts! USA (SKUSA) program, similar to the same way they started. Now home from the SuperKarts! USA SuperNationals 21 held in Las Vegas, Nevada, SCR branded drivers closed the season strong with heat race wins, podium results and fast lap honors at one of the largest and most competitive karting events in the world.

“It was a pretty good weekend for all of the SCR drivers,” explained Mike Speed. “Though the end results do not show our true speed, all drivers had the pace to run near the pointy end of the field. Congrats to Jeremy Fairbairn on his X30 Junior podium result.”

Progressing through the heat races in fine form, all three X30 Junior drivers from the Speed Concepts Racing camp would transfer directly to the main event. Zane Maloney lead the way on the strength of strong heat race finishes including a pair of victories to line up outside row one in P2 while Jeremy Fairbairn would roll off in eighth. Tyler Gonzalez overcame his first heat DNF to score a pair of top-six results to begin his final in the 18th position.

In an all out dog fight to the checkered flag, Fairbairn advanced forward five position to stand on the SuperKarts! USA SuperNationals podium with a third place result in a field of more than 80 competitors. Battling wheel-to-wheel in the final few laps, Fairbairn was in the position to score a victory in the biggest karting event of his career, but fell just short to stand on the podium. Zane Maloney showed impressive race craft throughout the entire week but some bad luck in the main event would relegate him down the running order, eventually finishing in the 11th position. Tyler Gonzalez closed his multi-championship winning season with a 15th place finish.

Speed Concepts Racing entered a quartet of drivers in the IAME Mini Swift class with Alex Powell and Kyffin Simpson leading the way. In a stout field of drivers and several heated on track battles, Powell would be the only SCR driver to transfer direct to Super Sunday’s main event while Simpson came home second in the Last Chance Qualifier (LCQ) race to punch his ticket to the finale.

Kyffin Simpson and Paul Bocuse encountered some issues in the heat races and were ranked in the 43rd and 44th positions while Calem Maloney in 56th, as only the top-34 would make the cut to the final. Simpson used the LCQ to make the transfer while Maloney’s and Bocuse’s weekends ended with 21st and 22nd place finishes after contact on the opening lap put them deep in the field.

Speed continued, “The Mini Swift class is one of the most competitive classes in karting. Several of our drivers were victims of on track incidents that were no fault of their own and hindered any forward progress. To win, or to even transfer to the main event, everything needs to go very well. Unfortunately, some of the SCR drivers encountered some bad luck in the heat races and were forced to run in the LCQ which turns into a huge battle for six transfer positions. Though Paul and Calem’s drives ended on Saturday afternoon, both drivers soldiered on and continued to gain experience, showing speed along the way.”

In the IAME Mini Swift final, Alex Powell started his quest for a win in the 14th position while Simpson would start 36th courtesy of his second place result in the LCQ. In another fierce battle on the temporary street circuit, Powell ended his SuperNationals 21 with a 16th place result while Simpson gained ten positions in the main event to cross the stripe in the 26th position.